NASHVILLE, Tennessee – Metro Council member Robert Swope unveiled a new plan with a play on words, “Intelligent Transit for the It City Nashville,” Tuesday at an event at the Wildhorse Saloon on 2nd Avenue North in downtown Nashville.

Joining Swope on-stage were Tennessee State Senators Bill Ketron (R-Murfreesboro) and Mark Green (R-Clarksville). Senator Ketron spoke of his personal experiences with increasing traffic issues as he travels to the state legislature, and Senator Green talked about the benefits of autonomous vehicles, including increased roadway capacity due to the ability to have vehicles in closer proximity to each other.

Swope put on a high-tech presentation in conjunction with Paul Doherty, President and CEO of The Digit Group, Inc., (TDG) who connected to the meeting via telecomm from Japan, where he had been meeting earlier with the Prime Minister. 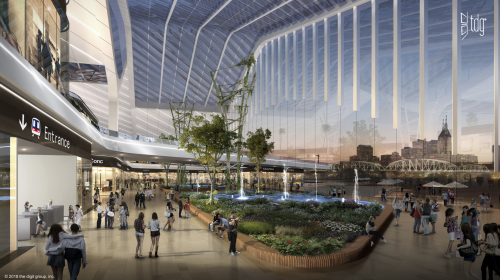 TDG specializes in holistic smart city solutions, “using technology solutions as the basis” for planning, designing, building and manufacturing smart city solutions that provide safe and comfortable transportation, among other elements with solutions implemented in China, Southeast Asia, India, the Middle East, Europe and through the U.S., according to the TDG website.

Swope told The Tennessee Star that he has served on the advisory council to TDG and traveled to China with TDG as part of the 2017 U.S. CEO Delegation.

Swope paid for any expenses associated with Tuesday’s presentation and the event out of his own pocket, because of his fervent belief in a better transportation solution for Nashville. A PAC (Political Action Committee) has been formed which may eventually provide reimbursement for his expenses, according to Swope.

Among the 50 or so attendees at the event were three current Metro Council members, John Cooper, Larry Hagar and Davette Blalock. 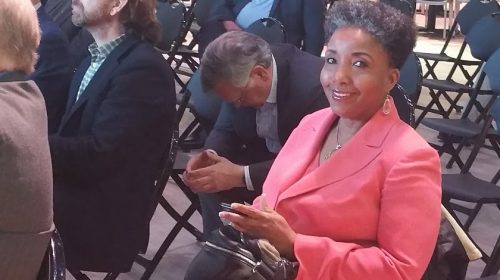 Carol Swain was the one Metro Nashville mayoral candidate in attendance.

“I believe that Intelligent Transit for Nashville is the way that we should go as a city and even as a region, because it’s not just going to affect Nashville. It’s going to ease the traffic woes of the entire region,” Swain told The Star.

“The presentation that Councilman Swope put together was impressive and easy to follow,” she added.

“I think that when Nashvillians and others in the region see the plan, they will enthusiastically get behind it. I especially liked the fact that it involved Public Private Partnerships – that it doesn’t make us dependent on the federal government or raising taxes. This is an opportunity for all of us to get together and do something that will improve the quality of life for all Tennesseans,” Swain noted. 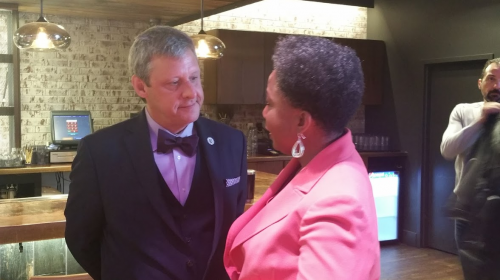 While the Nashville Area Chamber of Commerce office on Commerce Street is well within walking distance to the venue at less than a tenth of a mile, its President and chief promoter of the $9 billion transit plan, Ralph Schultz, did not attend the event.

Swope painted a vision of all ten counties working together, in stark contrast to the Let’s Move Nashville plan that addresses less than one percent of the total regional community, and carries with it “a hope beyond hope that the nine others join together.”

Electric vehicles operating within an autonomous environment combined with corporate fleet service for the first mile/last mile would be managed by the MTA (Metropolitan Transit Authority) and RTA (Regional Transit Authority), in Swope’s plan.

Ninety percent of all accidents and congestion are caused by human error, according to Swope, and removing that from the equation could save as many as 1.5 million lives globally. Other benefits include a 70 percent savings in transportation costs and an end to acres of parking lots.

Within a one- to five-year timeline, the entire 10-county region would have an Intelligent Transit system at a total cost of $1.65 billion, a mere fraction of the $9 billion Let’s Move Nashville plan.

With no fixed infrastructure, routes are flexible and can be changed at the push of a button. With such a system that combines mass and personal transit, Nashville can be a model for and drive the entire country forward on true transit equality and independence, Swope enthusiastically conveyed to attendees.

The specifics of the plan, as presented by TDG’s Doherty, includes dedicated AV/EV (Autonomous Vehicle/Electric Vehicle) high speed lanes, implemented in two phases throughout the ten-county region within five years. Double stacked highways without exits on I-64, I-40 and I-24, will accommodate the numerous vehicles that travel straight through Nashville without making stops.

TDG’s NextGEN Autonomous Vehicles are “100% environmentally clean,” and are sized according to the needs and the environment. The Intelligent Transit system will include 16 AV/EV Transit Centers with two or three located in each direction of the Nashville-area’s three major interstates.

Each element of the Intelligent Transit plan was accompanied by a high-quality, futuristic depiction from the NextGEN Autonomous Vehicles in different lengths to the double-stacked highways at both day and night.

When speaking of the Transit Centers, Doherty alluded to those of the past that served as a cultural and art centers, as the rendering of a modern transit center was displayed.

The Intelligent Transit system concept and presentation distinguished itself with its “forward thinking solution,” as opposed to the Let’s Move Nashville plan which “never considered anything but an 1850’s technology,” Swope told The Star.

The event concluded with Swope’s encouragement to be sure to vote in the May 1 referendum, with early voting that starts Wednesday, April 11.