That’s a question usually asked by a popular fashion magazine but now we HAVE TO ask the same question when the same dress is being worn by two politicians – a radical progressive Democrat and an establishment-sometimes-conservative. 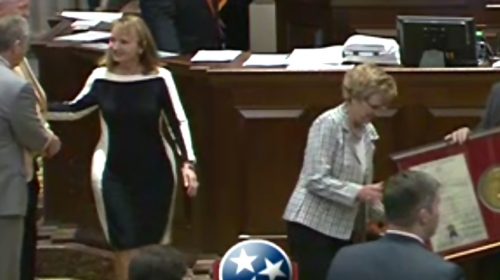 Before we even get to the judging (and we expect you to weigh in as to whom you think wore it best), the dress worn yesterday by Speaker Beth Harwell on the House floor has called out to The Star to ask the obvious question:

Why would Speaker Beth Harwell who is also a GOP gubernatorial candidate do twinsies with the disgraced radical progressive-pro-illegal-immigration-kicked-out-of-office former mayor Megan Barry?

You know that old adage – “imitation is the sincerest form of flattery” and you could say that fashion is oh so very universal, meaning that Democrats and Republicans can be equally wobbly with “aesthetic intelligence.”

But wearing the same dress that adultress Megan Barry wore in her official mayoral website photo??? Just what image is Harwell trying to plant in voters’ minds? Did Harwell think The Star wouldn’t notice???

The Star’s unsolicited fashion advice to the Speaker is simple – first, burn the dress; Megan Barry has simply ruined that look for self-respecting women. Next, remember that softer colors help smooth the rough edges.

7 Thoughts to “Off the Record: Who Wore it Best?”