Brian Wilson, host of 99.7 FM WTN’s Nashville’s Morning News, will break a story on the results of a new Tennessee Star Poll on the Nashville Transit Plan that is on the May 1 ballot for approval or rejection by Nashville/Davidson County voters at 7:05 a.m. this morning, Monday April 16.

You can listen to today’s broadcast of Nashville’s Morning News here.

The Tennessee Star has provided these results to Wilson on an exclusive basis prior to the publication of the full details of the poll in The Star at 7:30 am.

The Tennessee Star Poll, conducted over a two day period between April 12 and April 13, will be the first poll to give details of attitudes among likely voters in Nashville/Davidson County about the merits of the $9 billion transit plan whose fate they will determine at the ballot box on May 1.

The long, twisting road to the May 1 Nashville/Davidson County voter referendum began in January of 2017, when Gov. Bill Haslam introduced the IMPROVE Act to purportedly fund road construction in the state by increasing the gas tax by 6 cents per gallon and the diesel fuel tax by 10 cents per gallon.

Tucked away in the bill that was rammed through the House Transportation Committee last March by State Rep. Barry “Boss” Doss (R-Leoma) was a provision that allowed counties and cities across the state to vote on increasing taxes even further locally (through higher sales taxes and higher hotel and other taxes) to fund mass transit and other projects. 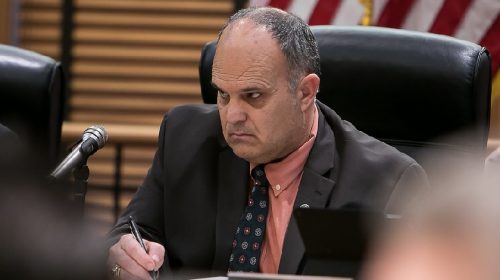 After the IMPROVE Act passed the Tennessee General Assembly in April, then-Mayor Megan Barry tweeted her thanks to “those who called their legislators to discuss this important topic, and the representatives who voted in support of Governor Bill Haslam’s IMPROVE Act, which contained the critical local option component that will let voters determine the future of transit in the Nashville area.” (emphasis added)

Gov. Haslam signed the bill into law, which went into effect on July 1.

Almost immediately after the passage of the IMPROVE ACT, disgraced former Mayor Barry launched an aggressive campaign to promote the $9 Billion Transit Plan and persuade the Nashville Metro Council to vote to place it on the ballot as a referendum voters in Nashville/Davidson County could either approve or reject. 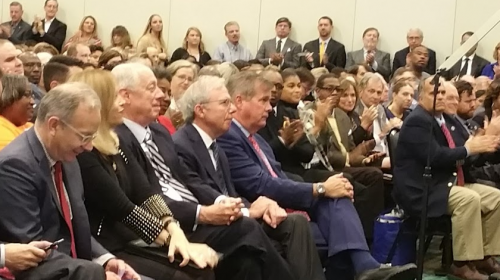 In October, “Barry released a detailed proposal Tuesday for a huge $5.2 billion mass transit project for the Nashville area that calls for four different types of tax increases,” The Star reported:

Barry will ask Metro Council to schedule a referendum for May 2018 to ask voters to approve the plan, called “Let’s Move Nashville: Metro’s Transportation Solution.”

The mayor and her allies have been involved in efforts for some time to promote a tentative regional mass transit plan for Middle Tennessee they say would cost $6 billion. That plans for Metro Nashville alone now carry a $5.2 billion price tag reflects the ambitious nature of Barry’s vision, and will subject the progressive Democrat to even more criticism from those already skeptical of the project.

The project would include light rail and electric buses, as well as improvements to existing transportation. In recent weeks, Barry has come up with a controversial idea for an underground tunnel in downtown Nashville for trains and buses. The tunnel would cost more than $900 million, which has significantly added to the overall cost.

Barry presented her proposal at the Music City Center. The Nashville Tea Party later slammed her for saying during her speech that “there’s going to be a lot of questions after voters approve this.”

“Madam Mayor, with all due respect, your job is to answer all the questions voters have before they vote,” the Tea Party chapter said on its Facebook page.

Among those celebrating Mayor Barry’s proposed plan at its launch event (which the Metro Government subsequently admitted would actually cost $9 billion, $4 billion more than Barry originally claimed) were former Gov. Phil Bredesen, now a candidate for the Democratic nomination for the U.S. Senate in Tennessee, and State Rep. Doss. 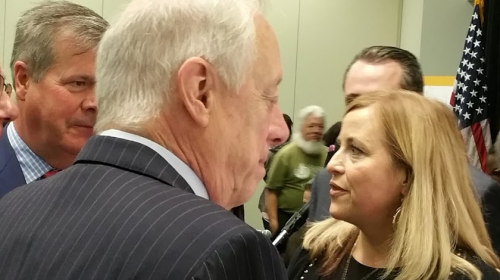 Transportation experts across the country have skewered the plan as expensive and unworkable.

In January, “the Beacon Center of Tennessee hosted a free conference open to the public . . . featuring the nation’s foremost experts discussing “Off Track: What’s Wrong with Nashville’s Transit Plan & What We Should Do Instead.” The title reflects the sentiment of attendees, primarily interested citizens versus special interest groups, that there is a congestion problem in the greater Nashville area that needs a solution, but one that is more efficient and cost effective than the $9 billion Let’s Move Nashville plan being put to referendum on May 1,” The Star reported:

Randal O’Toole, as the first presenter, had no problem livening the room early on a Saturday morning, opening with a slide of a 1938 train while making the point that he loves passenger trains, helped restore the vintage Baldwin in the picture and owns four of the rail cars. But, he added, light rail should be called “lie rail,” because it weighs more than heavy rail. The “light” refers to capacity.

After rattling off a dizzying array of statistics accompanied by slides that put the “one picture is worth a thousand words” into action, O’Toole was followed by the other two panelists with their presentations who then joined together for a Q&A session. After a brief break, the same process was repeated with the second panel.

The information presented, so thorough, in-depth and data-driven, had many attendees taking pictures with their cell phones to capture the slide presentations while furiously writing notes on event topics that included: Federal Light Rail Funding: Trends and Tribulations; Crazy Train: The Wrong Plan for the Music City; A Cost-Effective, High-Quality Transit Solution; The Future of Passenger Surface Transportation is Trackless and Driverless.

Using the popular television program Shark Tank format, Beacon Center’s Shultis framed his presentation around four questions: How much are we investing, how long to recoup our investment, how risky is the investment and what can we expect for our returns.

Answering those questions revealed some shocking data including a per person cost for the completed plan of $13,080 or $33,882 per household to Nashvillians. Even adjusting for the plan’s purported 47 percent of sales tax coming from outside Nashville, the cost is $5,320 per person or $13,782 per household. The estimated completion date for the current plan is 2032, which translates into congestion plus 14 years of construction. However, the increased taxes to fund it will go more than three decades longer until 2068, meaning that, on average, only those born in 1990 or later will be alive when the tax surcharges expire.

Despite these common sense objections, the Nashville Metro Council moved forward with the transit plan.

“Under a tight deadline, the Nashville Metro Council approved – by an overwhelming margin of 29-to-1 – a proposal to add Mayor Megan Barry’s ambitions $9 billion mass transit plan to the Davidson County ballot May 1 as a referendum,” The Star reported in January.

“The sole ‘no’ vote was cast by Council Member Angie Henderson (District 34),” The Star noted.

At-Large Counci Member Erica Gilmore, now a mayoral candidate, was one of the 29 “Yes” votes on the transit plan in January.

After announcing her candidacy, Gilmore reiterated her support for the plan, but earlier this month, on April 9, she flip-flopped and announced her opposition to the plan.

Acting Mayor David Briley has been a steadfast supporter of both former Mayor Megan Barry’s progressive legacy and the $9 billion transit plan.

One Thought to “WTN’s Brian Wilson to Break Story with Results of Poll on Nashville Transit Plan at 7:05 AM This Morning”