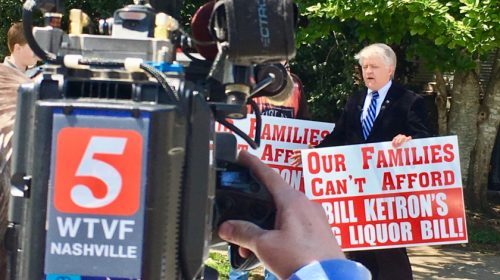 Pastor Dale Walker, president of the the Tennessee Pastors Network (TNPN), held a prayer rally at the Murfreesboro Courthouse Square to pray for the families suffering the effects of horrible addictions to drugs and alcohol and to protest legislation recently passed that allows for Sunday liquor sales. About a dozen people joined Walker, and a protester clad in a “liquor bottle” costume for the rally. Some protesters held signs noting that “Our Families Can’t Afford Bill Ketron’s Big Liquor Bill.”

“Pastors have to deal with the effects of alcohol after the bottle is empty,” Walker said, as he held a public prayer for those affected directly and indirectly drugs and alcohol. “We are praying for not only those who are impacted by drug and alcohol addiction, and but also our elected officials like Senator Bill Ketron who have their own addiction to special-interest money that produces so much harm for our families.” 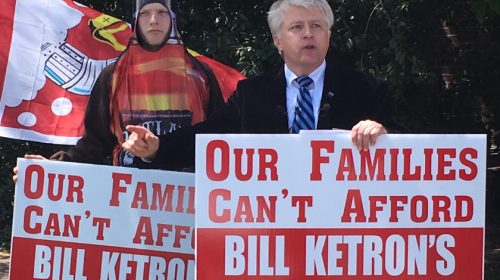 Walker expressed particular concern over Senator Bill Ketron citing Bible verses to support passage of his “liquor on Sundays bill.” There will be hell to pay for Bill Ketron misrepresenting the Word of God in order to serve his liquor lobbyist masters,” Walker told the crowd. During debate over the legislation Ketron claimed there are over 200 Bible verses that purport to support alcohol.

“It is very apparent that the politicians are not the answer and are part of the problem by passing so many bills expanding venues of alcohol,” an impassioned Walker added. “Even so-called conservative Republicans are giving tax breaks to Jack Daniels Whiskey while raising gasoline taxes on working Tennesseans. It seems the Republicans in Nashville have become the party of Big Liquor—and Murfreesboro Senator Bill Ketron is leading their efforts by effectively shouting ‘belly up to the bar!’ This bill has passed, but voters in his hometown need to know what he is doing in Nashville, and our Courthouse prayer rally will hopefully help to inform them.”

The Tennessee State Senate narrowly approved the measure that was sponsored by Senator Bill Ketron (R-Murfreesboro) to allow Sunday sales by a 17-11 vote, one more than needed for passage. Governor Haslam has said he will sign the legislation.