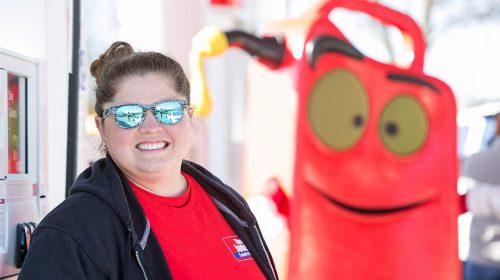 Gas Can Man made a pit stop in Murfreesboro early Friday morning at DJ Mart on Lascassas Pike to pump out $25 in free gas to 100 lucky – and very happy – drivers. SuperTalk 99.7 WTN morning host Brian Wilson announced the location of the Energize America giveaway at 7:05 am and within 10 minutes dozens of cars were lined up around the gas station waiting for the fuel to flow at 7:30 am. Within less than an hour the giveaway ended after the one hundredth car had been “pumped up.”

One driver, who got out of his car for a selfie with Gas Can Man, said his low fuel light came on while he was waiting in line. Several drivers pointed out that fuel prices are moving back towards $3 per gallon and that legislators who added to the “pain at the pump” should pay a price. “I don’t know how my representative voted, but I will find out if they voted for the tax increase,” one man exclaimed. “And I’ll tell him they voted last year but I get to vote this year!” 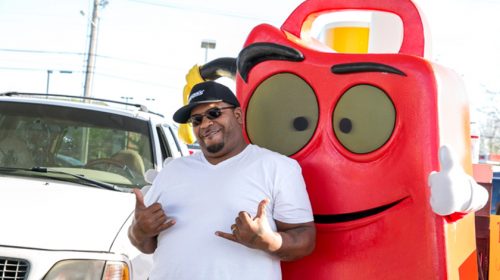 The $25 in free gas provided to drivers who were quick to arrive represented the approximate amount of gasoline taxes the average Tennessee driver pays each month. Governor Bill Haslam and the Tennessee legislature permanently raised fuel taxes by over $300 million a year last year as part of the IMPROVE Act, despite Tennessee having $2 billion in surplus and recurring revenue funds. Most of the Rutherford County legislative delegation, including Representatives Bryan Terry, Dawn White and Mike Sparks voted against the increase.

Murfreesboro State Senator Bill Ketron, who is a candidate for Rutherford County Mayor in the upcoming May 1 election, voted for the fuel tax increase and says he stands by his vote. Tina Jones, a Rutherford County businesswoman and former County commissioner, says she would have opposed the gas tax increase. 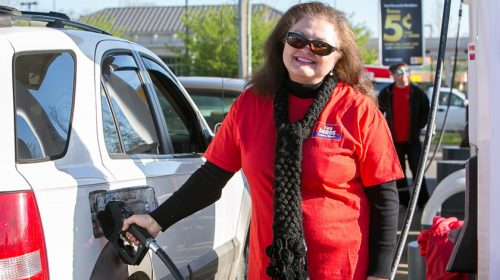 Jones and several of her supporters helped pump gas and direct traffic during the event while other Jones supporters in red t-shirts brandished “Ketron is a pain in my gas” signs along the sidewalk leading into the gas station. Another protester dressed in a hazmat suit, who identified himself as “Radioactive Bill,” carried a sign criticizing Ketron for supporting the dumping of radioactive waste in the Rutherford County landfill.

Gas Can Man is a non-partisan project of Energize America, a national coalition of advocates for common sense energy policy that incorporates an “all of the above” approach and which has been active in the energy policy debate since 2012. A spokesman for Energize America said that they anticipate hosting similar Gas Can Man events across Tennessee over the coming months.