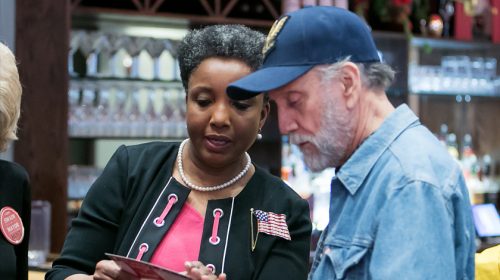 Monday’s haul increased the amount Swain’s campaign has raised in just three weeks to more than $60,000, further solidifying her position as the only serious challenger to Acting Mayor David Briley in the May 24 special mayoral election for Nashville/Davidson County.

At the later event, Hegseth explained to the audience why he had flown down to Nashville from New York City and planned on making his own contribution to Swain’s campaign for Mayor of Nashville.

“You just meet certain people you resonate with,” Hegseth said of Swain, who has appeared as a guest on Fox & Friends Weekend several times. 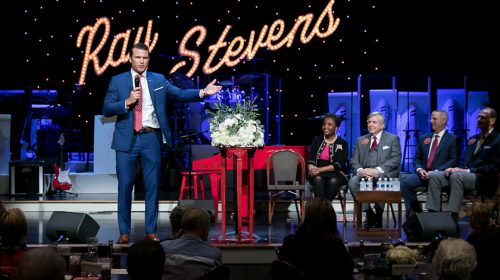 “They are a truth teller amidst a sea of the wrong set of ideas lost in the wilderness, and that is Carol Swain,” Hegseth said, to loud applause from the audience.

“There are some people that will only come on [as guests on Fox & Friends Weekend] when they answers are easy, when the questions are simple. And then there is Carol Swain,” he noted.

You can watch and listen to Hegseth’s comments here.

Swain told the audience of her life story that brought her to this moment as a candidate for Mayor of Nashville. She was born into poverty in rural Western Virginia, one of twelve children, dropped out of school after the 8th grade, married at 16, and was a mother at 17. She described the numerous jobs she had, working in a factory, selling door-to-door, working in a nursing home.

Swain then explained how she earned a GED high school diploma, then went on the Roanoke College and earned a Phd. and became a tenured professor at Princeton University.

In 1999, Vanderbilt University hired her.  That same year, she had a Christian conversion experience.

After retiring from Vanderbilt last year, she was not sure what specifically her next calling would be, but as events unfolded, it became clear to her that she had been preparing all her life to become a leader, the Mayor of Nashville. 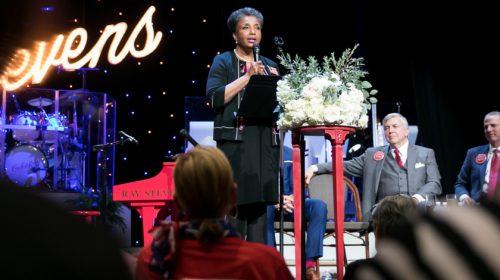 Among the issues Swain highlighted are her opposition to the proposed $9 billion transit plan that the incumbent, Acting Mayor David Briley, supports.

Voters in Nashville/Davidson County are already going to the polls in early voting for the May 1 referendum on whether to accept or reject that transit plan.

You can watch and listen to Swain’s comments here.

The Tennessee Star Poll released last Monday shows that Acting Mayor David Briley has a 34 point lead over the second place Swain, 43 percent to 9 percent. But Briley is 7 points below the magic 50 percent threshold he needs to avoid a runoff with the second place finisher. 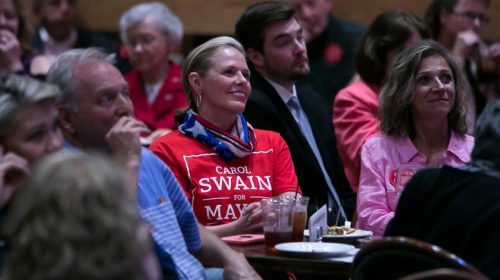 Briley, who was sworn in on March 6 after the resignation of former Mayor Megan Barry, who pleaded guilty to a felony that same day, has long been considered the front runner in the special election. Indeed, the Nashville Business Coaltion asked all other candidates to stay out of the race on March 8, the day Briley announced he was a candidate for the job to serve out the remaining year and several months of Barry’s term.

Though Briley raised $400,000 in the first three weeks of his campaign, he has made several recent missteps which makes him vulnerable to a challenge from and increasingly well funded Swain.

First, he continues to maintain his support for the $9 billion transit plan, despite the recent Tennessee Star Poll that shows residents of Nashville/Davidson County oppose it by a 62 percent to 27 percent margin. 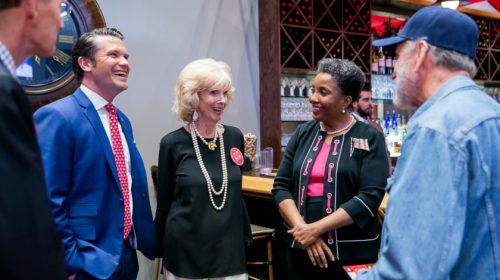 Second, he issued what his opponent Swain called a “pandering for votes” move Sunday when he called for more gun control reform Sunday hours after the shootings that killed four people at a Waffle House in Antioch, Tennessee earlier that day.