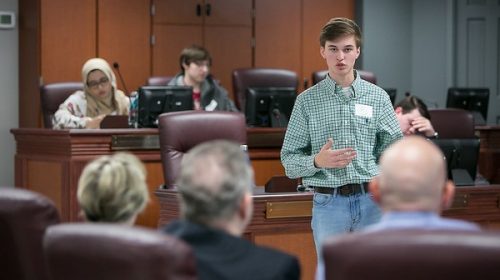 Moran was presented a check for $3,000 as the first winner of the Andrew Woodfin Miller Foundation Scholarship, which was provided through a donation to the Polk Foundation, and presented by Constitution Bee master of ceremonies Michael Patrick Leahy, CEO and Editor-in-chief of The Tennessee Star.

In addition to the scholarship, Moran will receive a free trip for two to Washington, D.C. to attend a series of events of his choosing. Moran told The Star that his mother, who was among those in the audience on Saturday, will be accompanying him to the nation’s capitol for that trip.

Moran hopes to attend Vanderbilt University and plans on majoring in political science. He intends to become a lawyer.

Three students, including Moran, survived seven rounds of competition involving increasingly difficult questions and an Essay round to compete in the dramatic championship round. The other two students in the championship round were Amanda Nolan of Mt. Juliet High School and Aryan Burns, also of Lincoln County High School. 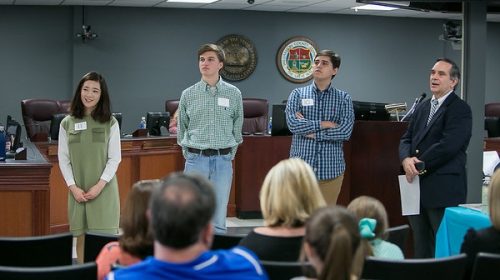 Burns, also a junior, hopes to attend the University of Tennessee where he plans on studying biology.

Nolan, a senior, will be attending Vanderbilt University in the fall, where she plans on studying political science and pre-med. She intends to become a pediatrician.

During the competition, students sat in the same chairs used by Williamson County Commissioners, and stepped up in front of the judges and audience when their turn to answer a question came up. 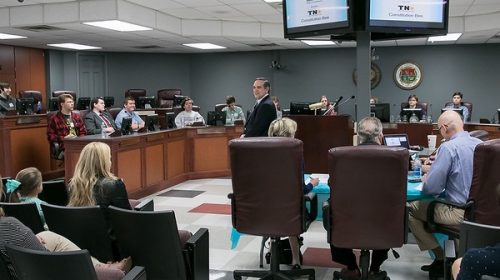 Air Force Lt. Colonel (retired) David Garcia, one of the three judges at the event, led the students and audience in the Pledge of Allegiance to open the day’s events.

A warmup round, known as the Preamble Challenge where students deliver the Preamble to the Constitution in whatever method they choose–oration, dramatic reading, song, dance, or rap. At the end of the event, the judges awarded three prizes for this round for “The Most Creative Preamble,” “The Most Entertaining Preamble,” and “The Most Persuasive Preamble.” Students who received these awards earned one point for their high school in the team championship competition. You can read about the three students who received awards in this warm up round here.

After the warmup round, the contestants were asked multiple choice and true/false questions in Rounds 1 and 2. 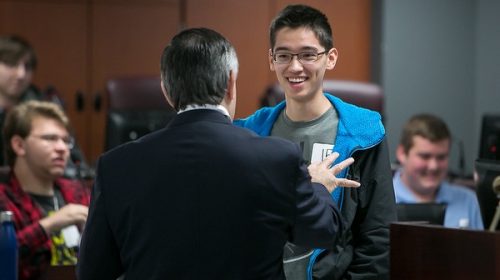 All 17 students answered the Round 1 questions correctly, but one student missed a Round 2 question, and went to “The Bonus Question Bench,” where he waited for a tougher question. If he answered it right, he would be allowed back into the individual competition contest. If he answered it wrong, he was out of the individual competition at that time, and would have headed to “The Friends of the Court Bench,” where he could compete for points in the high school team competition if one of the contestants wanted to “ask a friend” during their later round of question.

Adriel Nuta of Ravenwood High School became the day’s first “comeback kid,” when he was brought back to center stage and given the opportunity to get back in the individual competition. 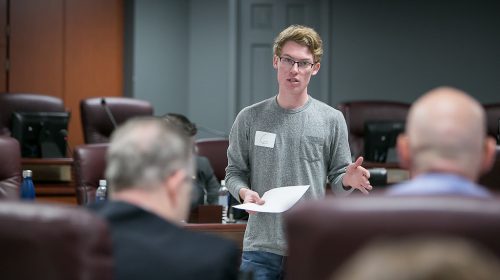 Showing good sportsmanship, all 16 of the other students in the contest cheered when Nuta answered a tough question correctly and won his way back into the competition.

Questions in Round 3 through 7 became increasingly difficult, and students who gave the wrong answer were no longer able to get back in to the individual competition through the Bonus Question Bench, which was only part of the competition for Rounds 1 and 2. Students who gave wrong answers in Round 3 and beyond went to the Friends of the Court Bench, where they were able to earn a point for their high school team by giving the right answer to a contestant in the individual competition who, uncertain of an answer, could “ask a friend.” 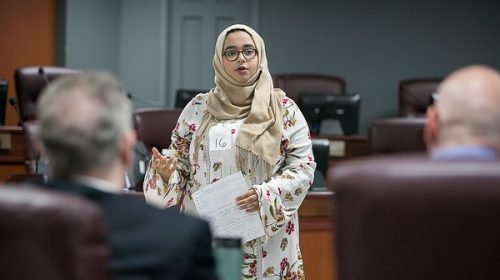 Contestants in Rounds 3 through 7 were allowed one opportunity to “ask a friend.”

Four contestants in Rounds 3 through 7 chose to “ask a friend,” and those students in the Friends of the Court Bench provided right answers to their contestant friend on three of those occasions.

At the end of Round 7, there were eight remaining competitors, and the competition then shifted to the Essay Round.

During the Essay Round, each student was asked a more conceptual essay question, and was given 60 seconds to think about their response. They were also allowed to write notes and take those notes with them as they delivered their responses to the judges. 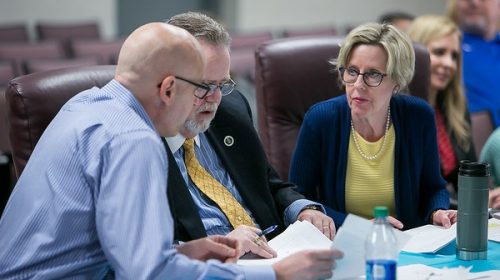 The three judge panel–consisting of former teacher and co-author of The Tennessee Star Guide to the Constitution and the Bill of Rights for Secondary Students Claudia Henneberry, President of the Polk Foundation Michael G. Sheppard, and Lt. Col. USAF (retired) David Garcia–then exercised their subjective judgement in selecting the three students who delivered the most compelling essay answers who would go forward to the championship round.

In the championship round, the three finalists stood side by side in front of the judges, where they answered highly difficult questions posed in rapid fire. 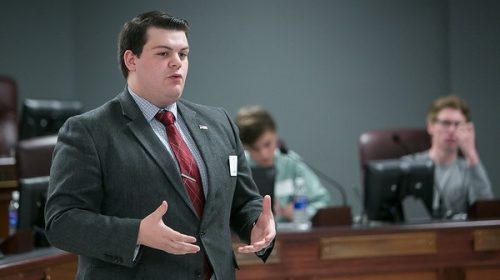 This time around, twelve seniors, four juniors, and one sophomore participated.

William Patterson, a sophomore at Columbia Central High School, was the youngest participant.

The audience member who traveled the farthest to attend the event was Brooke Rice, a native of Tennessee who now lives in Michigan, where she works for The Thomas Moore Law Center.