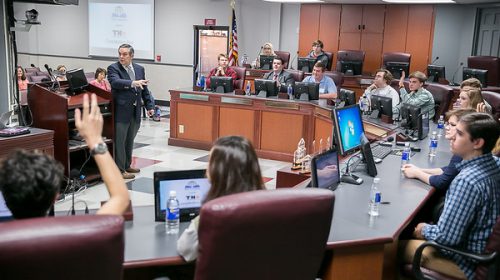 Mount Juliet jumped to an early lead, with 9 points, one for each contestant, followed by Lincoln County with 2 points. One point each was awarded to Central Magnet School of Murfreesboro, Columbia Central High School, Stewart Creek High School, Ravenwood High School, John Overton High School, and the home school team.

All told, 17 points were distributed as the competition began, one to the high school of each competitor.

Mount Juliet added to its lead with a strong performance by students who provided correct answers when the remaining contestants “Asked a Friend” for help from their positions in the “Friends of the Court Bench,” where students who had been eliminated from the individual competition went to be able to add points for their high school after Rounds 1 and 2.

Contestants in Rounds 3 through 7 “asked a friend” for help on four occasions. On three of those occasions, students from Mount Juliet High School–Sophia Maas and Oren Kagan–provided the contestant with the correct answer, earning their school another three points. 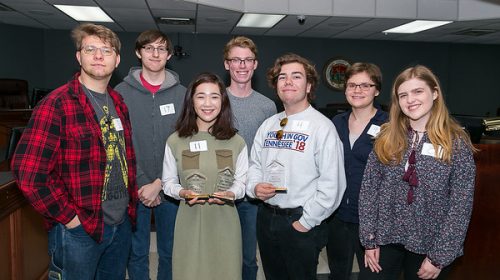 At the end of Round 7, Mt. Juliet held a seemingly insurmountable 12 to 2 lead over second place Lincoln County.

But when the subsequent Essay Round was completed, and the judges announced the three finalists for the Championship round, two of them–Cooper Moran and Aryan Burns–were from Lincoln County High, and one–Amanda Nolan–was from Mt. Juliet High, giving Lincoln County High a path to jump into the lead, since 10 points would be awarded for first place, 5 points for second place, and 3 points for third place. 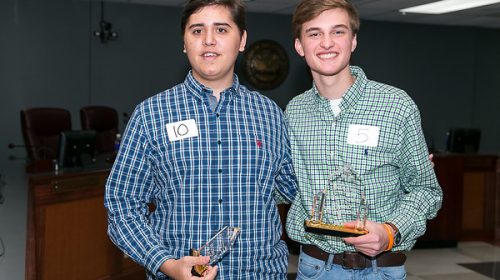 At the end of the individual championship competition and before the judges rendered their decisions on the Preamble Challenge undertaken at the beginning of the competition, Lincoln County High School had a 2 point lead over Mt. Juliet High School, 17 to 15.

The judges awarded 2 of the 3 points available to students who competed in the Preamble Challenge to students from Mt. Juliet High–Jimmy Hayes and Amanda Nolan, and 1 point to a student from Stewart’s Creek High–Alexis Henderson.

At the end of the competition, Mt. Juliet High and Lincoln High were tied with 17 points each, and were declared co-champions of the Tennessee Star Constitution Bee High School Team Competition. 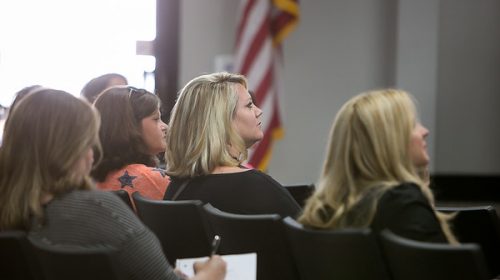 All 17 students who participated in the Spring 2018 Tennessee Star Constitution Bee received certificates of completion and will be receiving letters of recommendation which can be used in their college applications.

Students who want to sign up now for the Fall 2018 Tennessee Star Constitution Bee can do so here.