FRANKLIN, Tennessee–Mount Juliet High School senior Jimmy Hayes stole the show in the Preamble Challenge warmup round for The Tennessee Star Constitution Bee Saturday with his “Soul Man” version of the Preamble, earning him “The Most Creative Preamble Award” and an extra point for his Mt. Juliet High in the team competition. 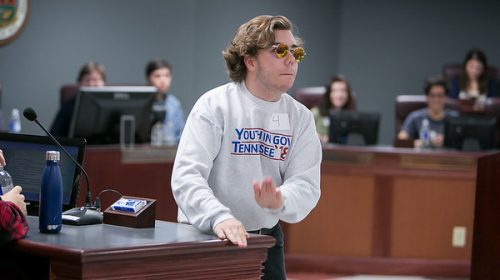 Amanda Nolan, Jimmy’s Mount Juliet High classmate, wowed the judges and the audience with her pitch-perfect a capella rendition of the “School House Rock” song version of the Preamble, earning her “The Most Entertaining Preamble Award, and an extra point for Mt. Juliet High in the team competition.

Alexis Henderson, a senior at Stewarts Creek High School from Smyrna, delivered the most compelling oration, earning her “The Most Persuasive Preamble” and a point for her high school.

The idea behind the Preamble Challenge is to give the competing students an opportunity to begin the competition by having some fun, win points for their high school in the team competition, and get “on-stage” one time before facing a potential elimination question. 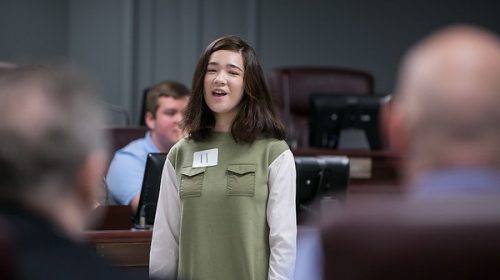 Most of the competing students chose to deliver the 52 words of the Preamble in classic oratorical style, but, as in the Spring 2017 Tennessee Star Constitution Bee, a few chose to use “rap” or “song” as their method of artistic delivery.

The Preamble was written by Gouverneur Morris at the Philadelphia Convention in 1787 and lays out the Who, the Why, the What, and the How of the 4,000 plus words that followed in the document it introduced:

WHO: We the People of the United States,

WHY: In order to form a more perfect union,

– establish Justice,
– insure domestic Tranquility,
– provide for the common defence,
– promote the general welfare,
– and secure the Blessings of Liberty for ourselves and our Posterity,

HOW: do hereby ordain and establish this Constitution for the United States of America. 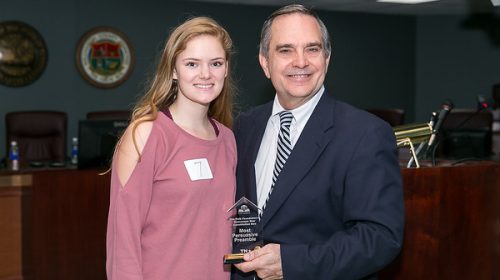 As The Tennessee Star reported in its article in the Preamble as part of the Constitution Series:

Black’s Law Dictionary defines a Preamble as “An introductory statement in a constitution, statute, or other document explaining the document’s basis and objective; esp., a statutory recital of the inconveniences for which the statute is designed to provide a remedy.”

As noted earlier in this Constitution Series, the United States Constitution written by the fifty-five delegates to the Constitutional Convention in Philadelphia in 1787 represented the first time in the history of the world that the governing laws of a country were encapsulated in a single document.

Given the historical uniqueness of such a single document, it is not surprising to see why those delegates thought that it was important to include an introductory Preamble at the very beginning of the document.

Even though the Constitutional Convention began in May of that year, it was not until September 8, 1787 – a mere nine days before the final document was signed by thirty-nine of the delegates in attendance and Benjamin Franklin famously told Mrs. Powel the convention had delivered “A Republic if you can keep it”- that the delegates got around to the task of writing a Preamble.

On that day, the delegates selected a Committee of Style and Arrangment, whose task was to write the final version of the Constitution and add a Preamble for signature by the delegates followed by submission to the Continental Congress, and then the states for ratification.
“On September 8, 1787, with the convention quickly drawing to a close, a “Committee was then appointed by Ballot to revise the stile of and arrange the articles which had been agreed to by the House.” The members of the committee were William Samuel Johnson, Alexander Hamilton, Gouverneur Morris, James Madison and Rufus King. These five men were known as the Committee of Style and Arrangement and it was their job to organize the layout of the numerous resolutions that had already taken shape and formed the new Constitution. (See “Madison’s Notes on the Debates in the Federal Convention” for September 8, 1787 ),” according to Constitutionland.com

The Fall 2018 Tennessee Star Constitution Bee may add a second warmup round in addition to The Preamble Challenge.

One Thought to “Mt. Juliet’s Jimmy Hayes Steals the Show With ‘Soul Man’ Version of Preamble”