Acting Mayor David Briley demonstrated that he is not ready for prime time when he repeatedly stumbled Monday night in his responses to questions about the Nashville Transit Plan to a large group of voters in Bellevue. The 90 minute meeting was intended to be a last minute pro-transit pep rally, but it ended up being more like the cross examination of a witness who was not particularly compelling. 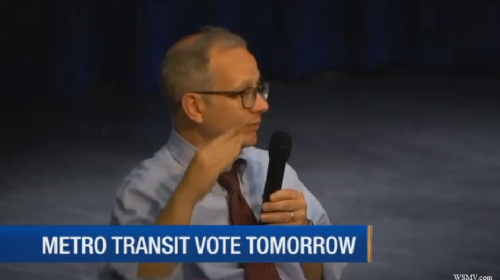 Briley admitted several things damaging to the plan during the evening.

He conceded to the audience that he did not think he would get federal funding for the $9 billion transit plan, already criticized as being hugely and disproportionately expensive.

He also admitted that residents of Bellevue are not likely to use the proposed mass transit system.

“I don’t really understand how a $9 billion investment for 3 percent turns out to be a good investment for the majority of us,” one member of the audience said, and asked Briley to explain how that math made sense.

“Lots of people are not going to get on light rail or any sort of transit. I know that. We’re not saying everybody should,” a defensive Briley responded.

“What we’re saying is if we don’t get some people into transit, then we’re just going to come to a standstill as a community,” the mayor claimed in a speculative assertion backed by no credible evidence.

“What policies are you going to put in place to make sure that it delivers at budget?” another skeptical voter asked the mayor about the transit plan.

“I don’t promise to have a great answer yet,” the mayor responded unconvincingly to another tough question about the plan.

You can watch the WSMV video of the Bellevue meeting here:
WSMV News 4

Briley also stumbled badly when the audience asked questions about his administration on matters not directly related to transit.

The Georgetown University graduate told the audience he doesn’t like the word “vocational,” when asked a question about educational readiness of Nashville’s student, an answer many in the audience whose children are not 4 year college bound found more than a bit condescending.

He also embraced the far left economic philosophy of West Coast cities like Seattle and San Francisco, the latter where he lived for several years and attended law school, coming out firmly in favor of raising the minimum wage. The city of Seattle adopted a $15 an hour minimum wage, to disastrous effect, causing many restaurants to fire wait staff, and even putting a number of restaurants out of business.

Briley is considered the front runner in the May 24 special election in which Nashville/Davidson County voters will select a mayor to serve out the remaining one year and four months in the term of disgraced former Mayor Megan Barry, who resigned on March 6 after pleading guilty to a felony earlier in the day.

If the voters of Nashville/Davidson County reject the transit plan Briley has endorsed so enthusiastically, it could spell big trouble for Briley’s electoral prospects three weeks and two days later.

His rival Swain is prepared to seize the moment on Election Night, and plans on holding a Victory Celebration for opponents of the transit plan at the Millenium Maxwell Hotel in Nashville tonight from 6:00 pm to 10:00 p.m.

Polls close at 7:00 pm, and the results of votes cast during early voting are expected to be released by 7:10 pm.

More than 59,000 residents of Nashville/Davidson count cast ballots during early voting, and an estimated 50,000 or so are expected to vote today.