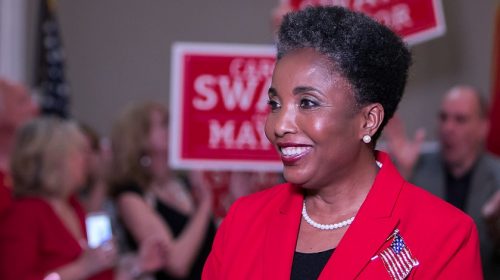 Swain addressed an enthusiastic crowd of more than 100 supporters who attended the Victory Celebration for opponents of the plan hosted by her campaign and held at the Millennium Maxwell House Hotel in Nashville Tuesday night.

Opponents of the transit plan swept to victory in the final vote count by a stunning 64 percent to 36 percent margin in record voter turnout in Nashville/Davidson County. The results were remarkably close to The Tennessee Star Poll released on April 16, which showed opposition to the plan at 62 percent, with support only at 27 percent.

“Tonight is a great victory for all of Nashville,” the former Vanderbilt professor told the crowd after the pro-transit group conceded at 8:20 pm.

“A $9 billion transit boondoogle that benefited developers, construction companies, and engineering firms, and left the little guy out to dry has been defeated,” she continued. 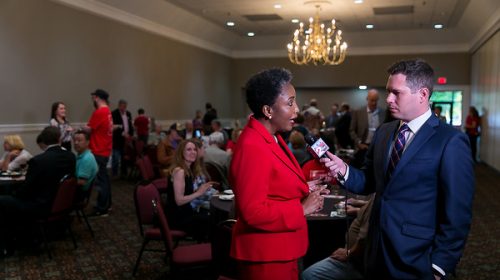 “As mayor, I will work to implement immediate and long term solutions to regional traffic congestion,” Swain added.

“There is a short sprint to May 24, and I’m asking for your support in my bid for Mayor of Nashville. I pledge to create a government that works for you and not against you,” she concluded.

Swain has made opposition to the transit plan one of the cornerstones of her campaign since she announced she was filing nominating petitions to run for Mayor of Nashville on April 2.

In contrast, Acting Mayor of Nashville David Briley has tied his own campaign for mayor to support for the transit plan that suffered the crushing defeat Monday night. 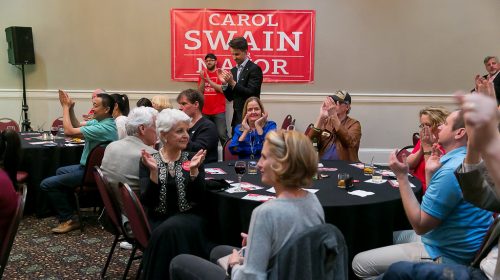 Incredibly, Briley’s official statement after the results were announced came off as tone deaf and unresponsive to the will of the people.

The plan, Briley appeared to say, was not really the problem. Voters attitudes about the plan were the problem, he seemed to indicate, echoing the contempt for voters expressed so recently by another far left political candidate, Hillary Clinton.

“We all can agree that we have to do something about traffic and transportation, but voters didn’t get behind this plan,” Briley said, adding:

My responsibility as Mayor is to get back to the drawing board and find the common ground to develop consensus on a new way forward. Our transportation problems are not going away; in fact, we know they’re only going to get more challenging as we continue to grow. I’ll get back to work tomorrow on finding a solution for Nashville that we all can agree on.

With the sound rejection by the voters of the plan he supported so publicly, Briley appears to be an acting mayor without a base, while Swain, in contrast, is the beneficiary of a growing tide of public support, and the only candidate with the financial and organizational resources capable of defeating Briley. 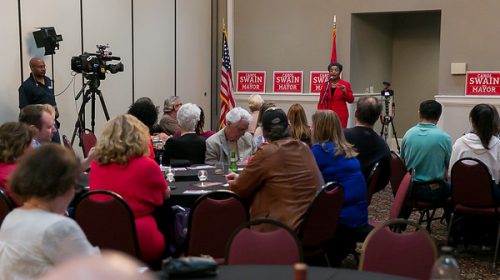 But Briley’s support can now be seen as dwindling to a maximum of 36 percent of voters–the number who voted yes on the plan–and that level of support is probably overstating it, since the acting mayor has proved to be such an ineffective spokesperson, as his stumbling performance at a Bellevue town hall on election even demonstrated.

Briley has mounted virtually no campaign for his own candidacy, other than to act in his official capacity, and despite having raised $400,000, he now has no message on which to run, with little time to develop one.

In contrast, Swain has mounted a vigorous campaign with a highly effective campaign team already in place.

She has had a lot of “voter touches” in the past month as well. She is the only candidate to have radio ads on the air, and sources tell The Star that voters are about to see Swain and her message in a number of different “voter touches” beginning almost immediately. 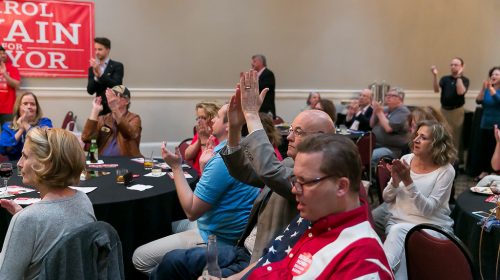 Unlike all the other challengers to Briley, Swain has proved an effective fund raiser, exceeding $60,000 in the first three weeks of her campaign, and is well on her way to more.