In discussing his reasons for bringing the resolution, Billingsley said that Shelby County’s law enforcement was “not prepared for this” referring to the legislation determining the state’s policy about cooperation with federal immigration authorities and compliance with federal law.

Billingsley’s comment is strongly suggestive that Shelby County law enforcement is currently releasing criminal illegal aliens into the community instead of transferring custody to ICE, a practice that if confirmed, would constitute a violation of the new anti-sanctuary law and potentially make the county ineligible for economic and community development grants from the state.

Mauricio Calvo, director of Latino Memphis, spoke in favor of Billingsley’s resolution even though the reasons he cited are unsupported by federal court precedent and the experience in other states that have passed even stricter anti-sanctuary city and anti-illegal immigration measures.

Seven commissioners passed the resolution while Commission Chairman Heidi Shafer did not vote citing a lack of information available to make an informed decision. 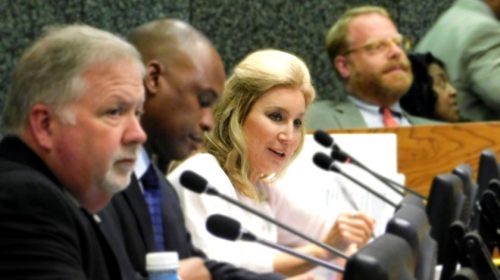 The next day Chairman Shafer released the following statement to The Tennessee Star:

I believe it is every commissioner’s duty to fully understand the short and long term effects of every piece of legislation that crosses their desk. This is the only way we can truly do our jobs and protect the citizens of Shelby county. Earlier this week an 11th hour add-on resolution to the Commission meeting was brought urging the Governor to veto the state’s immigration bill, currently on the Governor’s desk.

It was argued that the unfunded state mandate would be a huge financial burden on Shelby County causing tax increases.

I work hard to have a full understanding of all the items before us, but did not have enough information to cast an impromptu vote with unknown risk to the tax payers of Shelby county. So of course I asked if we could have more time to consider, and to allow a greater number of Commissioners to attend, but the deadline for the veto was eminent.

Having looked at the language overnight carefully, I am convinced that any additional burdens on local law enforcement resources were overstated. I trust our law enforcement to use this additional tool provided by the legislature to stop the flood of illegal activity in Shelby County.

I fully support the President’s plan for safe borders and a secure country. That includes Shelby County doing its part.

I will be moving to reconsider this vote, and my vote will be a firm “NO.”

Billingsley’s resolution is an almost verbatim recitation of objections made by the TN Immigrant & Refugee Rights Coalition (TIRRC) representatives who aggressively opposed the bill during the legislative committee hearings. TIRRC argued that the bill imposed an unfunded mandate on local jurisdictions and that criminal illegal aliens cannot lawfully be held and transferred to ICE on the basis of an ICE detainer.

Two months ago, ruling on the Texas sanctuary city law, reputed to be the strictest in the country, the Fifth Circuit Court of Appeals upheld compliance with ICE detainers by local law enforcement. The detainer form, I-247A, requires the ICE officer to certify that probable cause of removability exists.

The Court also held that under the “collective knowledge” doctrine, the local law enforcement officer doesn’t need probable cause himself, because the knowledge of the ICE officer is imputed, or passes to the local officer.

The Soros funded Migration Policy Institute profile of Shelby County’s “Unauthorized Immigrant Population” based on 2010-14 American Community Survey data, shows an illegal alien population of 25,000 predominantly from Mexico and Guatemala and spread mostly within the working-age range of 25 – 44 years old. Of the 23,000 over age 16, sixty-four percent were reported as employed (16,000). Approximately one-quarter of the 18,000 people reported to be over the age of 25 have either a high school diploma or a GED and of 24,000 surveyed over the age of 5, just under 50% or 12,000 are reported to “speak English ‘not well/’not at all.'”

A 2017 fact sheet produced by the American Immigration Council, a globalist pro-immigration organization, documents that “120,000 undocumented immigrants comprised 37 percent of the immigrant population and 1.9 percent of the total state population in 2014” in Tennessee.

Repeating another unfounded objection made by TIRRC and Latino Memphis, Billingsley was adamant that the new anti-sanctuary legislation would force law enforcement to racially profile based on skin color, overlooking perhaps, that the anti-sanctuary city policies don’t come into play until a person is first arrested for committing a crime under Tennessee law.

Nor does the bill include a “show me your papers” provision like Arizona’s law, a claim made by Calvo to the commissioners and which he did not inform them had been upheld by the U.S. Supreme Court.

The Star contacted Shelby County Mayor Mark Luttrell’s office and asked whether he was concerned that Shelby County may be considered a sanctuary city under the state’s new law possibly jeopardizing economic development funds. He was also asked whether he had communicated with any of the commissioners either in support of their resolution or to ask them to reconsider their actions.

No response has been received from the Mayor’s office.

The next Shelby County Commission meeting is scheduled for Monday, May 14th, at which time Chairman Heidi Shafer is expected to offer a motion to reconsider the action taken on Billingsley resolution.