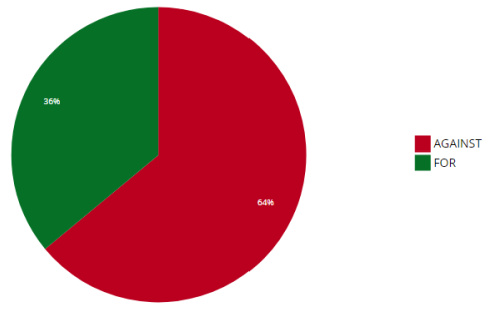 What happened? In a rush to scoop the story every major Nashville news organization has opined on the results with little reflection.
Here are the real reasons why the referendum failed in a landslide.

We already have transit

This will come as a shock to out of state meddlers like StreetsBlog USA, CityLab, and the National League of Cities, but Nashville has transit. Likewise, based on the convulsions from the mayor (Nashville “will fail” if the referendum does not pass), metro council, and local media, you would think even locals don’t know this.

The Nashville Metro Transit Authority budget is $80 million. We have buses, shuttles (AccessRide and airport shuttles), private/public partnerships, ride sharing, car and van pooling, BRT lite (non-dedicated lanes), the Music City Star, and bike paths. According to MTA there are roughly 10 million riders (or rides) per year. One wonders what MTA CEO Steve Bland thinks when Nashville leaders say we “do nothing.”

It seems that everyone in Nashville besides the pro-transit tax supporters knew that we already have public transit. So, the continuous “we need to do something” war chant had no effect.

It was a tax

When you say no to dessert after a filling meal, you are not against food. You just don’t want dessert. If you stop your formal education after getting a bachelors’ degree this does not mean you are against education. The pro transit tax group’s attempt to segregate those for and against transit created imaginary foes. The loudest voices on the @bestnashtransit Twitter account are bus riders from all over the U.S. They love transit and want more of it–but not at any cost.

Nashville voters suspected from the beginning that this was all about taxes. Ashford Hughes, a senior official with the mayor’s office, and former mayoral candidate Charles Bone confirmed these suspicions in a March 1st Twitter exchange. Bone: “If we don’t pass the dedicated funding piece of this, then we have nothing to debate…” Hughes: “Ding Ding Ding. We have been debating transportation improvements for the last 20 years and haven’t moved the needle. A dedicated funding source is long overdue and on the ballot in May.”

Nashvillian David Stockton concluded: “I voted against the plan because it was a tax increase. No plan disguised as a new tax is going to pass in Nashville.”

Nashville is a blue city in a red state. Specifically, Nashville is a blue city in a red county. When polls showed resistance to the transit plan, and the opponents got more and more vocal, the pro-transit tax group turned further left to try to re-shape transit as a red/blue, Republican/Democrat, conservative/liberal choice. Metro Nashville has never had a Republican mayor, so it seemed like a reasonable, if risky, bet. Acting mayor, David Briley, went all in with “… if we want to be a progressive city…we have to build out a transit system…” Of course, the word progressive is not so subtle code for Democrat—as in we are all Democrats here, right?

However, this failed too. The perception of many Democrats in Nashville was that the transit tax plan was corporate welfare. They saw the bloated transit-oriented development (TOD) plans and wondered what they had to do with increasing access or reducing congestion. They wondered how gentrifying neighborhoods—a goal of TOD—could create more affordable housing. Logic tells us that gentrification destroys affordable housing. They saw the cluster of contributors to the Citizens for Greater Mobility PAC that are engineering, architectural, contracting, architectural, and construction firms and called out their obvious conflicted interests.

81% of the current costs of $5.4 billion was devoted to light rail and a tunnel. This was a fatal error. The pro-transit tax coalition thought that whenever they could get their listeners to settle on a mere $5.4 billion rather than the full committed $8.9 billion that they were winning. But, talk inside the anti-transit tax group was that the public is equally shocked by $5.4 billion as $8.9 billion—so we didn’t care much how many digits were in front of the billions.

Neither did the voters. What they did know, was that this plan would double the annual MTA budget, and its total cost was four times the entire Nashville budget. The sheer price tag suggested that transit is more important than everything, education, safety, healthcare, security, infrastructure, housing, roads, pensions, social services, debt service, and recreation COMBINED. But it is not.

Pro-transit tax side was insulting

“Maybe #Nashville will get behind a $20 billion transit plan? We are too dumb for words.” Lee Davis, after the vote, an architect for ESa, contributor to the Citizens for Greater Mobility PAC, and vocal supporter of the plan.

“The Pedal Tavern has become the primary mode of transportation in Nashville after residents stupidly voted down a sweeping $9B transit plan.” Andrew J Hawkins, senior transportation reporter, The Verge.

“69% of early voters were over 50. The future of our city and our kids (sic) quality of life is at stake on May 1. Don’t let yesterday’s generation decide our future!” Erin Hafkenschiel, Director, Mayor’s Office of Transportation and Sustainability.

This by Ashford Hughes, was possibly the most patronizing: “I say this with love and respect. Irregardless (sic) of the transit vote tonight. We need civic education in Nashville. Literally civic education classes for adults. The lack of understanding of how Government works.”

These comments speak for themselves, the tone and attitude of which helped to usher in a crushing loss for the pro-transit tax group courtesy of infuriated Nashvillians.

One of the many ways that the pro-transit tax coalition was tone deaf is how they completely ignored bus riders. They will say that one $billion of the budget was for busses and will disagree. But they are wrong. The overwhelming focus of this plan was for trains and tunnels, and a variety of other expenses, like sidewalks, that don’t even belong in a transit budget. Bus riders knew if the FTA grant didn’t materialize that buses would be dropped, not rail and a tunnel. 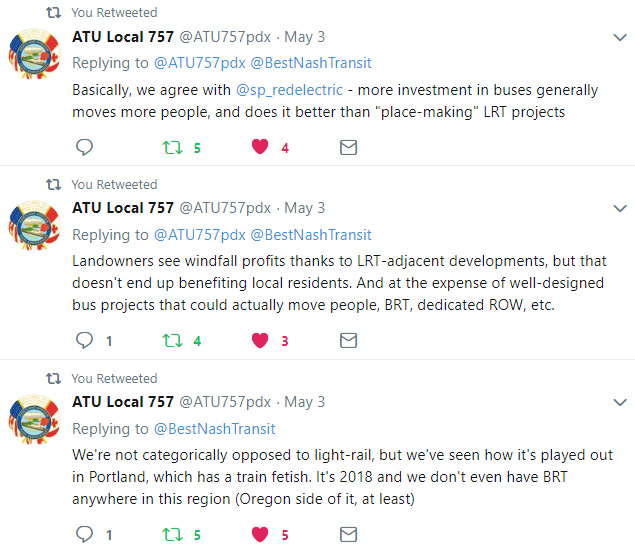 There is a great divide between bus and rail that is hard to see unless you are plugged into the national conversation about transit. You see it in Austin, Denver, Charlotte, Indianapolis, and Portland, Oregon. The biggest complaints against rail are not from imaginary anti-transit types but from pro-transit bus riders. Their service suffers for the sake of the much more expensive but limited service rail. They see buses as being for the average person, but rail as being the only way to get privileged (think of that any way you want) people to ride mass transit. This is from Erik in Portland in reference to the light rail battle he is fighting. “Yes, people want the bus. People like the bus. Just because rich snobby politicians hate the bus, doesn’t mean the citizens hate the bus.” Or, look carefully at this exchange I had with the Amalgamated Transit Union in Portland. Does this look familiar? Do you believe that the transit union in Portland who operate rail and buses are more authoritative, or are the transit union in Nashville that has experience only with buses? Is there anything we can learn from this?

Second only to the juvenile “Declaration of Independence” from cars that acting mayor Briley passed off as breaking news to a boozy, over confident handpicked Nashville crowd of transit tax supporters in April, was the attempted “dark money” gotcha attacks. There were three reasons why this strategy failed:

7 Thoughts to “Andy Martin Analysis: Why They Lost the May 1st Nashville Transit Plan Referendum”