State Rep. Harold Love (D-Nashville) sat down with Tennessee Star political editor Steve Gill on Thursday for the first in our series of exclusive interviews with the top tier of candidates in the May 24 special election for Mayor of Nashville. 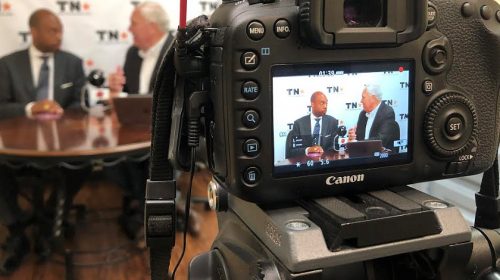 Love identified education and safety as his two top priorities in a potential Love administration.

(See the 20:10min mark of the video below)
“Our high school graduates who choose to go to college, only 24 percent graduate from college,” Love told Gill, adding:

Anybody who hears that number and let’s it flow through their mind knows that we can’t succeed as a city if only 24 percent of our high school graduates who choose to go to college are graduating. That means they come back to the city and they are not going back to college. I know that college is not for everybody, but those who choose to go to college . . . we have to improve our educational excellence of our high school graduates.”

Love added that education and safety go hand in hand.

“A recent Washington Post report said . . . where are America’s prisoners born? They said of all the zipcodes in the entire nation, where you’re most likely to go to jail if you’re born in a zipcode, is 37208. That’s North Nashville. That’s where I was born,” Love noted.

“This problem’s been happening for years.”

“There’s been a lot of focus recently on Rich Riebeling who has been through several mayors basically running the books. A lot of questions about what’s being done there. One of your opponents in the mayoral race, Carol Swain, has called for him to be fired by Mayor Briley,” Gill noted.

“Under Mayor Love, would he keep his job or not?” Gill asked.

“Under Mayor Love, everybody’s job is going to be evaluated,” Love responded.

“You sound like a new head coach,” Gill joked with Love.

“Everybody’s going to be looked and determined if they are doing their job, and if their activities are in the best interest of the city,” Love continued.

Gill also asked Love about his recent endorsement by SEIU, the union that represents a number of Metro Government workers, an endorsement he shared with Acting Mayor Briley and Council Member at Large Gilmore.

“The best thing I can say about the SEIU endorsement of me is what they said about my activity with SEIU. That i was always fighting for SEIU members not to have their work encroached on by the state legislature. Fighting for employees to still keep their jobs, and making sure that we had opportunities for increased wages,” Love told Gill.

“Are you concerned that an SEIU endorsement will make it harder for you to work with the business community?” Gill asked.

“I don’t think so. I would encourage people to look at my voting record and look at the things I’ve pushed for in the state legislature,” Love answered.

The conversation eventually turned to the politics of the current campaign for Mayor of Nashville/Davidson County.

“Just between us, how you going to win?” Gill asked.

“Turn out my base,” Love responded, noting that he has strong support in the legislative district he has represented for six years.

Early on in the interview, Love talked about his early life and why he got into politics:

I’m glad to be in the state legislature to serve these many years and of course being a lifelong Nashvillian have seen the city grow. I’ve seen all sorts of development occuring but have also seen so many things happen that we can improve on in the city.

My father really left a great impression on me as he would take me down to the legislature every day after school to really show me how government really worked well for people and how if you were a good public servant you could do great things for your constituency.

“There was a time in 1993, I was in college, and I had a very candid conversation with my father because I was getting close to graduation, and I was thinking about my career and my degree in economics and finance, I wanted to go into banking, and I asked my father, you went to public service, but you had a job before you did that. What was it that propelled you into public service, and should I consider that?

My father’s advice to me was, ‘You get you a job after college. After people call you into public service, then you go because that’s about the people saying ‘We want you to be our representative. We want you to speak for us. And that’s the advice I took.”
So, seeing him work, seeing great leaders from years in the past, where they made me apprecite the fact that if you are doing for the right reason, then it can be very rewarding, but it’s also the challenge of dealing with different constituencies and sometimes people with different motives and different agendas

3 Thoughts to “Mayoral Candidate State Rep. Harold Love: Nashville ‘Can’t Succeed As A City if Only 24 % of our High School Graduates Who Attend College Are Graduating’”