All of the candidates for Mayor of Nashville/Davidson County on the ballot in the special election May 24, with the notable exception of Acting Mayor David Briley and Ludye Wallace, squared off in a Mayoral Forum sponsored by the Pumps and Politics television program and held at Meharry Medical College on Thursday. 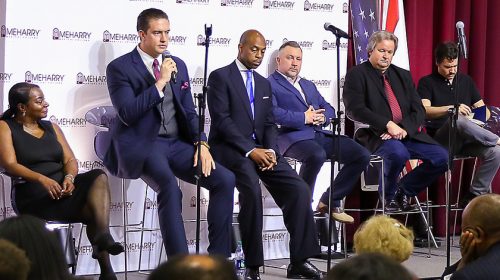 Briley chose to attend a taxpayer funded Mayor’s Town Hall at the Coleman Community Center instead, which the Mayor’s Office said was an “official event,” and not a political event, even though it was held only two weeks before the special election, and the types of questions asked by members of the audience at both events were similar.

Briley did provide a statement, which the host of the event read to the audience of about 200 people.

The mayoral candidates were divided into two groups, each of which fielded questions for about half an hour. 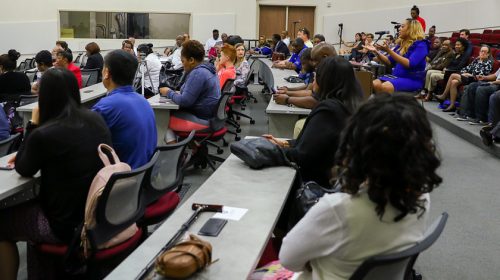 “Gentrification is a problem that effects both homeowners and renters,” Love said when the first group was asked a question about affordable housing and gentrification. (Beginning at the 19:10 mark of the Facebook video)

You can watch the full one hour and ten minutes of the forum here:

“Gentrification is a problem that effects both homeowners and renters,” Love said when the first group was asked a question about affordable housing and gentrification. (Beginning at the 19:10 mark of the Facebook video)

He then went on to explain the problems with unfettered development in Nashville, when significant efforts go into attract new corporations and their employees to the city, and the consequence of that growth is to increase the cost of housing and living for average Nashvillians.

A notable exchange occurred with the second group when a question about racial profiling was posed specifically to Carol Swain, but all candidates on the stage responded.

“People want to know. Tell us your thoughts and views on racial profiling,” the moderator asked Swain.

First of all, there are sentences taken out of context that are going around,” Swain said, adding:

Profiling is a part of what law enforcement does. FBI agents always use profiles.

“Profiles should not be based on race or ethnicity, so that’s all I have to say about that,” Swain concluded.

Ralph Bristol then responded to the question. 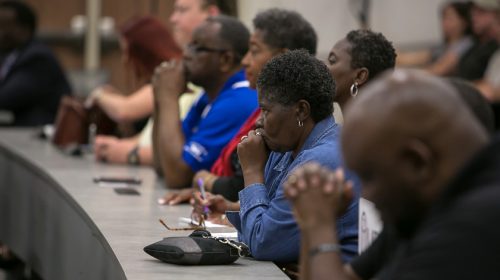 “Sometimes race might play some kind of role in that,” he began.

“Did he really just say that?” another audience member asked.

When the audience finally quieted down, Bristol responded defiantly.

“I know that is unpopular. I am not afraid to say unpopular things if the experts tell me that a particular characteristic is part of a necessary profiling in order to prevent crimes against your families,” he continued.

“I’ll never be afraid to offend an audience if its necessary to keep their families safe,” Bristol concluded.

After Bristol finished, jeff obafemi carr said “I have been racially profiled. I have two boys who have to walk through our neighborhood who are going to be racially profiled, unless we change the culture where it will not be tolerated.”

3 Thoughts to “Nashville Mayoral Candidates, Except Briley, Square Off in Forum”