Nashville mayoral candidate jeff obafemi carr, whose company was brought in to consult for strategy and served as Senior Advisor/Strategist for the No Tax for Trax group that successfully opposed the $9 billion transit plan defeated by voters in the May 1 referendum, told Tennessee Star political editor Steve Gill in an exclusive interview on Friday that transit will be his number one priority if elected mayor of Nashville/Davidson County in the May 24 special election.

“I can deliver a transit plan that’s effective, cost-efficient, and serves most of the city of Nashville in an effective way without being an extra burden on the taxpayers within 12 months,” carr told Gill.

“That’s a goal that I want to check off the list,” he said.

“The second thing I want to do is create an effective, affordable housing plan that doesn’t benefit just a few directors or a few housing builders, but gives people an opportunity to be innovative, and it also should be a transdisciplinary approach, that means it should intersect with any transit oriented development.”

“The third thing that comes up for me is youth violence. It’s important. I’m the candidate that’s created programs that are successful. That have kept kids 100 percent off the street.”

“I want to create a position in the mayor’s office that is just about how to develop best practices.”

“I will not use the term ‘youth violence,’ because I’ve learned the power of words. I will call it the director of youth, life, and prosperity. They will develop an interfaith, inclusive, and innovative plan that will be best practices that can be shared with everyone from non-profits to churches to corporations who want to get the best practices for involving youth in holistic ways to deter them from youth violence to give them opportunities, and to give them jobs.”

Carr’s comments came during an interview with Tennessee Star political editor Steve Gill, part of The Star’s ongoing series of interviews with the leading candidates in the May 24 special election for a mayor of Nashville/Davidson County to serve the remaining 1 year and three months of the term of former Mayor Megan Barry, who resigned in disgrace on March 6.

As part of this series, The Star interviewed State Rep. Harold Love (D-Nashville) earlier this week.

You can watch the full Steve Gill interview with jeff obafemi carr here:

Carr was born in Nashville and graduated from Tennessee State University, where he was a member of the nationally renowned marching band.

He’s worked as an actor, founder and operator of a newspaper for eleven years in Nashville, social entrepreneur who organized the Infinity Village homeless shelter that currently houses 23 homeless people in 13 micro-homes and a dozen tents at the Green Street Church of Christ in Nashville, and is currently the head of The Infinity Fellowship, an interfaith church.

The Tennessee Star interviewed a resident at the Infinity Village on May 6. You can watch that interview here.

Gill asked carr if he agreed with his opponent in the mayoral race, Carol Swain, who has said Metro Nashville COO, who has been at the center of a number of financial scandals, should be fired.

When I hear people say, ‘I’m going to go in, and I’m just going to clean house and get rid of the corruption, that tells me a couple of things. Number one, it tells me that you’ve never been in charge of running things before, because it’s not responsible to say ‘I’m going to pick and target people in departments that I’ve not had a chance to look at first, and wholesale say, ‘we’re going to get rid of it,’ just for the sake of having some popularity with the voters.

Carr added that the mayor voters of Nashville/Davidson County elect on May 24 will be serving just the last one year of a four year term, so everthing for the new mayor will be truncated.

“This is the fourth quarter of the game,” he said.

That’s frustration right now. It’s like going outside the Starbucks and saying, you had a bad day, somebody in Starbucks treated you wrong, you say, if I became the manager, I would fire everybody in there. They make you the manager. You go in, you fire everybody. A busload of people come in. You don’t even know how to make coffee.

So it’s popular to say that. And I agree with the sentiment.

So I’ll take that mentality [having no tolerance for mediocrity] into the mayor’s office, and there may be a lot more people that need to be focused on, that need to be retrained, replaced, or restructured, and I’m commmitted to doing that. But I’m also committed to being a responsible leader and not saying, here’s how an organism should work from the outside, without giving a chance to get inside and see why you are doing this. 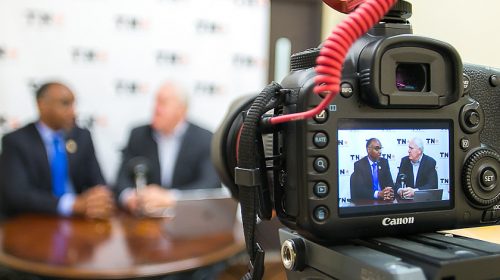 Carr  addressed the problem that the transit plan epitomized about the current culture of governance in Metro Nashville.

A small group of insiders are benefiting from Metro Nashville subsidized development programs, while the majority of Nashvillians are left out in the cold.

“Insider information, we’ve still not scratched the surface on what this plan was about,” carr told Gill.

“In the coming days, we’ll find out what happened. Who was getting paid. Who was going to get paid,” he added.

“If you look at the worthless transit stops, where we’re going to be traveling [under the transit plan],” carr continued, “there’s an expose there.”

Some of those things the media can say and they should say, because that’s what responsible media does, they put the spotlight on it. We know that the mainstream media, by and large, has become, in Nashville more corporate.

When you have major corporations that own all the media, it’s difficult to get the same kind of coverage you had back in the day of the Tennessean AND the Banner and we had the Third Eye and other independent publishers.

We heard touted there were 55 business that were part of supporting the transit plan.

Charles Robert Bone, at one debate we had, we had four debates, he said that there were 130 plus businesses supporting the transit plan, and my comeback was, yes, but there are 39,000 businesses in Nashville, so why are they not supporting this.

If you are an insider, if you have a history of getting government contracts, if you have a relationship with the previous mayor’s office, you can see that, I would have voted for it [the transit plan] too, but the majority of the people outside, they aren’t benefitting from this, and that’s something we have to look at.

“Government has to benefit everybody,” carr noted.

4 Thoughts to “Jeff Obafemi Carr: ‘I Can Deliver a Transit Plan That Serves The City of Nashville Without Being an Extra Burden on the Taxpayers Within 12 Months’”