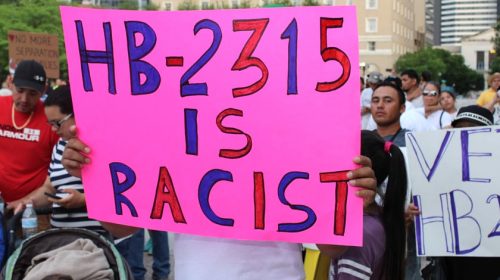 The usual Nashville left wing organizations–including the ACLU and  the Tennessee Immigrants and Refugee Rights Coalition [TIRRC]–flooded Legislative Plaza on Wednesday with a crowd comprised of mainly teenagers and young adults in their twenties, decrying the “racist” anti-sanctuary cities legislation sitting on the desk of Gov. Haslam, awaiting his decision to sign, veto, or allow the bill to become law without his signature. 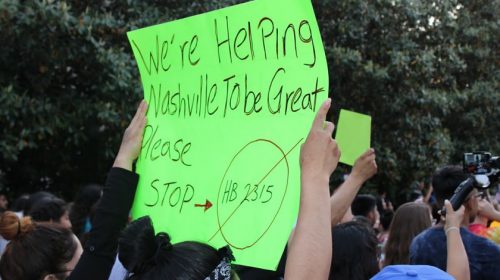 One protester held up a large pink and blue sign that read “HB-2315 is Racist.”

Another man in his twenties, with a cell phone to his ear, held up a sign that read “Gov Haslam Stop Deportations Veto: Bill HB 2315.”

A young woman in her twenties held up a green handmade sign that read “We’re Helping Nashville to be Great. Please Stop HB 2315.” 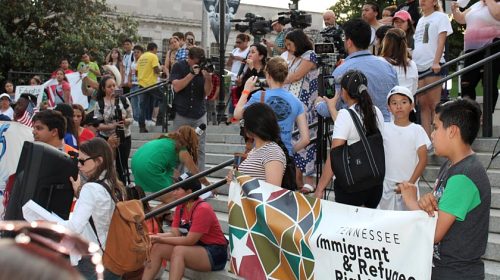 A number of elementary school and junior high school children were in the crowd.

A young boy, about 12 years old, stood on the Legislative Plaza steps, holding one edge of a Tennessee Immigrant and Refugee Rights Coalition Banner. The other edge of the banner was held by a woman in her twenties.

A young girl, about 11 years old, stood on the front row and held the edge of a colorful yellow, orange and red banner with a raised clenched fist and the Spanish words “Defensa Comunitaria. No mas deportaciones.”

Two young elementary school girls held up hand made signs, one read “The Pilgrims were undocumented. Know your history,” while the other read “Education, not 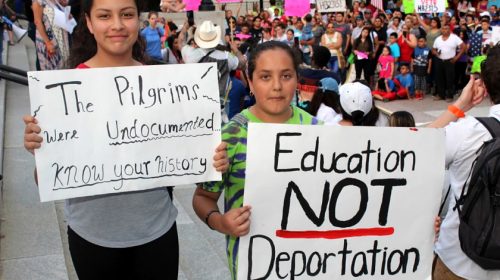 [Editors note for our readers who are history buffs: The Pilgrims landed in Plymouth, Massachusetts in 1620 on land they acquired legally from the Virginia Company of London, which had secured the rights to the land from King James I of England. While England’s claim to the land it granted legally to the Pilgrims was subject to potential disputes from Native American tribes in the area, the Pilgrims had clear legal documentation to be present in the land, under English law. They had the proper documentation to reside in the land they settled under the rules and regulation of the governmental entity that had sovereignty over the area.]

The Tennessean offered this description of Wednesday’s rally:

Two weeks after a crowd of a similar size marched through downtown Nashville to make their voices heard to Gov. Bill Haslam, the group of nearly 1,000 people did it again.

Chanting “sin papeles, sin miedo,” — “no papers, no fear,” the protesters made their way from Public Square Park to Legislative Plaza, calling on Haslam to veto a bill requiring local law enforcement to work with U.S. Immigration and Customs Enforcement to honor requests to detain immigrants who entered the country illegally. . .

“We’re reviewing all the implications of it,” Haslam said Tuesday. “My one concern about it is that it’s driving up a lot of fear on both sides. Fear of people that we have sanctuary cities, which we don’t, and fear of people that it would mean mass deportations, which I don’t think it means that either.” 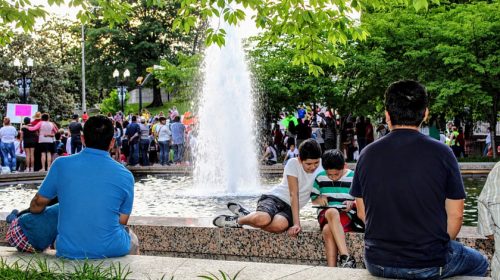