by Peter Hasson and Joe Simonson

Much of the developments surrounding Stormy Daniel’s lawsuit again President Donald Trump have focused on the business dealings of attorney Michael Cohen, but an investigation by The Daily Caller News Foundation reveals that Daniel’s counsel, Michael Avenatti, has his own questionable history.

Avenatti’s past is littered with lawsuits, jilted business partners and bankruptcy filings. People who have worked with the lawyer described him to TheDCNF as ruthless, greedy and unbothered by ethical questions.

Dillanos Coffee CEO David Morris claimed last Tuesday that Avenatti never paid him for over $160,000 worth of coffee that Dillanos supplied to Avenatti’s company. “So @StormyDaniels hot shot lawyer Michael owes my small company @Dillanos $160,179 for coffee,” Morris wrote on Twitter. “He talks a big talk about integrity. We trusted him.” 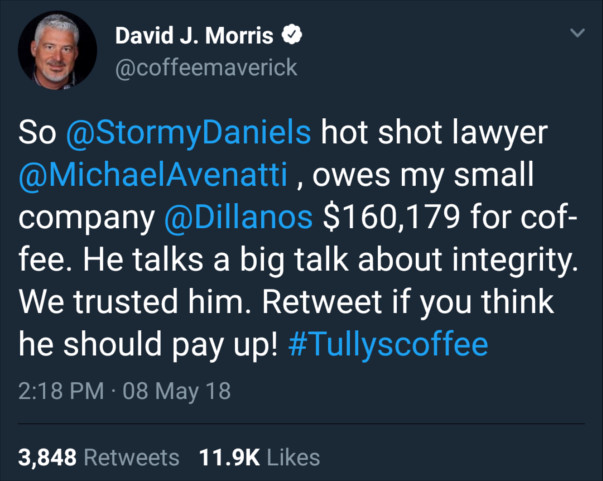 “Michael Avenatti owned Tully’s coffee. They were a large chain of coffee shops. We are a wholesale roaster. We supplied his coffee. The $160,000 represented only a few weeks worth of beans. We cut him off when he wouldn’t pay, he had to close,” Morris explained in a subsequent tweet. 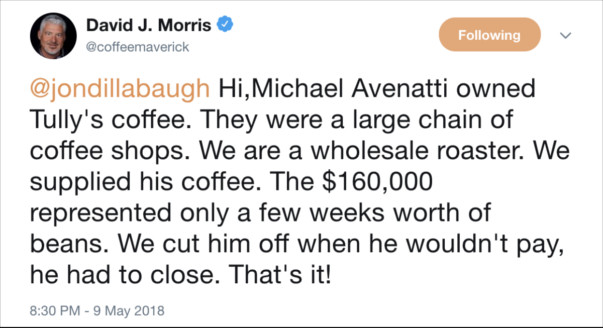 The Daily Caller News Foundation on Thursday interviewed Avenatti over the phone on several topics including Morris’s accusations, which Avenatti denied. “I don’t owe Dillanos coffee anything. I personally don’t owe them anything,” he said. “So that’s nonsense.”

But just three hours later, Morris announced that he had deleted his original tweet after working out “an arrangement” with Avenatti.

A spokesperson for Dillanos told TheDCNF that Dillanos’ new agreement was with Avenatti personally but declined to disclose any details of the arrangement. Avenatti declined to comment on the reported agreement.

“My decision to become a member and manager of Global Baristas was based, in part, on Michael Avenatti’s representation that he would provide both the capital to fund the entire Tully’s acquisition and sufficient working capital to allow Global Baristas to operate the Tully’s Coffee stores once the acquisition was completed,” Dempsey said in an August 20, 2013 affidavit.

“Michael Avenatti never notified me that he intended to have or caused Global Baristas to borrow $2,000,000 for working capital, nor did he notify me that he planned to have or caused the company to pledge substantially all, if not all, of its assets to secure any loan,” Dempsey charged. Avenatti denied the accusations but agreed to a settlement just three days later.

David Nold, a Seattle attorney representing several Tully’s vendors, filed a complaint against Avenatti with the California State Bar on March 26, accusing him of fraud.

“In essence, he bought a company out of bankruptcy and then used it for a ‘pump and dump’ scheme to deprive federal and state taxing authorities of millions of dollars,” Nold claimed.

Those who have worked with Avenatti describe an individual obsessed with fame and willing to use unethical methods to win a case.

“He honestly believes he can get up and say or do anything he wants and there’s no repercussions — largely there’s not,” said one individual who has worked with Avenatti in the past.

“I know this guy; he doesn’t care about anybody but himself. He loves the attention. It’s his whole lifestyle.”

An individual who worked with Avenatti pointed to his work in a number of high-profile cases like going up against Jim Carey and Paris Hilton as examples of his strategy of garnering as much attention as possible.

In the case of Carey, Avenatti represented a family claiming the actor was responsible he was responsible for her drug overdose and subsequent death. That suit was eventually dropped without Avenatti’s client collecting any damages.

The setback mirrors another in 2012, where a $41 million verdict he won against accounting firm KPGM was reversed and the consequences of the losses are reflected in his stints at a growing list of various firms.

Yet Avenatti hasn’t limited his career to law. Outside of experimenting in artisanal coffee, he’s also dabbled in professional car racing.

This strategy, according to those who know him, help Avenatti project an image of success, even if his ventures like  Eagan O’Malley & Avenatti, LLP eventually filed for Chapter 11 bankruptcy in 2017.

Two other lawyers associated with that firm have cut off business dealings with Avenatti, who now appears to be a solo practitioner.