Residents of Nashville/Davidson County surprised the local punditry on Saturday when 7,818 voters cast their ballots Saturday on the last day of early voting in the May 24 special mayoral election. The new single day record for the 14 day early voting period brought the total early voting turnout to 34,576, more than half the 59,000 who early voted in the May 1 transit plan referendum election.

There may be more surprises in store on election day this Thursday in this unusual race.

Here’s why: 57 percent of all the early votes cast–or 19,666 out of 34,576–were cast over the last three days. This is a dramatic change in voting behavior compared to early voting for the May 1 transit plan referendum, when 37 percent of the 59,000 early votes were cast.

You can see the break down by day and voting location below in data provided to The Tennessee Star by the Davidson County Election Commission:

What this huge surge in turnout over the last three days, after an anemic first eleven days, means for the outcome of the May 24 election is anyone’s guess.

There are two theories.

One theory is that the campaign of David Briley and his allies have woken up to the fact that they may have a real fight on their hands. According to that theory, which some sources have confirmed, desperate calls went out to the usual suspects on Wednesday of this week with this order: Get the vote out for Acting Mayor Briley! 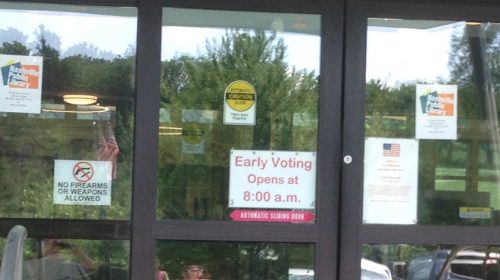 The second theory is that a rebellion is brewing among Nashville/Davidson County voters against the insider special dealing that has benefited downtown financial interest throughout the Dean-Barry-Briley administrations, and voters across the board are ready to throw the bums out.

Which theory turns out to be the most accurate description of what is really happening here will be revealed for all the world to see when the election results start coming in after the polls close on Thursday at 7 pm.