“Prior to her casting her vote raise taxes on Tennessee families, Lynn promised she would not support the tax increase, and even boasted that the funding for the expansion of Highway 109 was already approved and didn’t need the IMPROVE Act for funding,” Shane pointed out. “Yet, just a few weeks ago at an event in Mt. Juliet she said that her vote for the tax increase provided the funding for Highway 109 — despite the fact that state Department of Transportation records show it was on the project list in January, 2017 and it was reported in our local papers.”

With surplus and recurring funds of over $2 BILLION dollars in our state’s coffers, Lynn raised taxes by $350 million on our families after promising not to do it, Shane said. “Now she is trying to fool people into believing that her tax increase was really a tax cut! The next time you fill up, are you paying MORE or LESS than you did a year ago? Where’s our cut, Susan?”

Shane also emphasized the fact that Lynn is trying to justify her vote for the massive tax increase by deceptively claiming it also provided for a “twenty percent cut” in the sales tax on food. “The sales tax cut on food was one cent, while the gas tax increase was SIX cents,” Shane notes. “When you add up the tax increases on gas, diesel and car registrations and subtract the tax cut on food, the IMPROVE Act that Lynn voted for is a NET tax increase of over $200 million a year on our families! And it doesn’t take a math or business degree to understand that when you raise the fuel costs to get that food and other products INTO grocery stores then the price to consumers goes UP — completely wiping away the supposed sales tax cut that Lynn uses to excuse her inexcusable vote.”

“As Tennessee drivers are seeing gas prices move above $3 a gallon, and when every penny counts, we can thank Susan Lynn for the fact we are paying more at the pump than we should be — and more at the grocery stores as well,” Shane emphasized. “Susan Lynn needs to be truthful about the fact that the IMPROVE Act RAISED taxes on our families, even though it CUT taxes for the special interests and the corporate cronies she counts on to fund her campaign.”

State Rep. Susan Lynn denies she has claimed that the the IMPROVE Act provided the funds for Highway 109. However, a tape of her comments during a community political event on May 12, 2018 at the Circle P Ranch in Mt. Juliet includes her saying specifically: Today, due to the IMPROVE Act we have $105 million worth of very needed highway projects in my district, like 109, 141, I-40 and so many other smaller projects.”

Lynn also disputes the claim that the fuel and registration tax increase amounts to a $350 million a year increase, despite numerous media reports and Governor Bill Haslam’s own claims that the increases would generate $350 million a year in new funding for road projects. In fact, the Comptroller confirms that the full amount of new revenue generated annually by the new gas taxes, diesel taxes, and registration fees (which are phased in over three years) will be about $350 million. 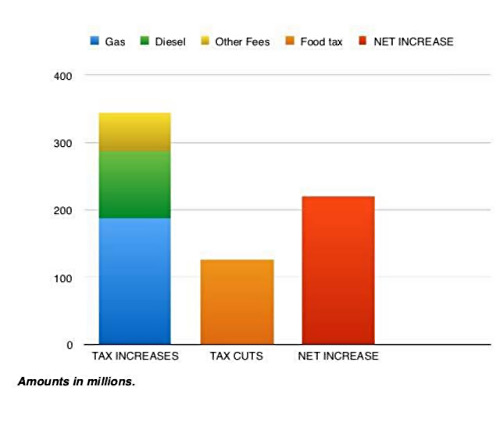 Shane points out that Lynn’s response that the fiscal estimates for 2017-2018 additional fuel tax revenues are only $150,663,400 rather than $350 million is complete and utter deception by Lynn. “She knows that the first four cents of the six cent per gallon gas tax increase went into effect the first year with another two cent increase coming over the next two years; and that the diesel tax increase of ten cents per gallon started with only a four cent increase the first year. While only about half of the increase went into effect immediately, another $200 MILLION a year is coming soon — and to pretend that isn’t the case proves she is not being truthful.”

Finally, Lynn responded to Shane’s assertion by stating that the initial funding for the 109 road project was secured in 2016, but that the IMPROVE Act contained the funding for Highway 109 “North of US-70 (SR24) to South of Dry Fork Creek” and she cites TDOT’s complete Improve Act project list – p 60. However, the TDOT “Projects Report” generated on January 12, 2017, several months prior to passage of the IMPROVE Act, included that specific portion of the Highway 109 project. Therefore, it was funded before the tax increases contained in the IMPROVE Act were passed.

Shane points out that while Lynn defends her argument that the IMPROVE Act was a tax cut because Americans for Tax Reform rated it as a “cut” the truth is that families don’t really get the benefits of the Franchise and Excise tax cuts, especially since about half of the over $113 million cut goes to just 24 companies in the state, nor any particular benefit from the Hall Income Tax cut that had already been passed prior to the IMPROVE Act anyway. “There is no way around the fact that regular Tennesseans are paying out MORE in taxes than they are saving with a tiny cut in the sales tax on food,” Shane says. “Intentionally deceptive, inaccurate claims by Susan Lynn to the contrary don’t change that reality.”