The chairman of the Senate Foreign Relations Committee is urging engagement with Venezuela’s socialist government after he traveled to the South American nation to bring home a Utah man jailed for two years without a trial.

Joshua Holt is scheduled to return to Salt Lake City on Monday night after receiving medical care and visiting President Donald Trump in Washington. He was released over the weekend following secret, backchannel negotiations between members of the U.S. Congress and Venezuelan officials. 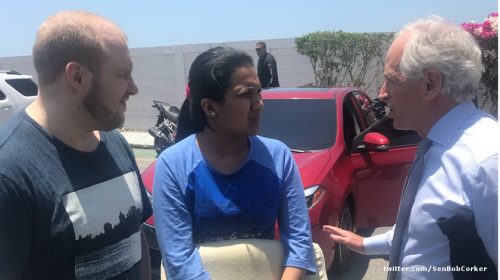 Republican Sen. Bob Corker of Tennessee traveled to Caracas on Friday to seal the deal with President Nicolas Maduro that would bring Holt home.

Corker stressed in an interview Monday with The Associated Press that “nothing was asked, and nothing was given” in exchange for Holt’s freedom. But he said the 26-year-old’s release as a goodwill gesture by Maduro shows what can be achieved through dialogue with the United States’ adversaries.

“In my conversations privately, I could not be more strident in my criticisms of the way the Venezuela government has handled itself. I’ve seen in Venezuela people lined up outside grocery stores just to buy toilet paper,” Corker said.

But he contrasted the hardliner approach toward Venezuela favored by many in Washington with the Trump administration’s willingness to talk with North Korea’s leader.

“If we are engaging with Kim Jong Un, who executes his relatives with high-power artillery at close range, then it would seem to me that engaging with Venezuela, while keeping on all the pressure that we have, would also make some sense,” said the retiring Corker, who has feuded in the past with the Trump.

Holt was arrested in June 2016 on weapons charges that he and his family say were bogus.

Holt had a tearful reunion with his parents in Washington on Saturday but has yet to see his three siblings, who are organizing a big homecoming for Holt and his wife, Thamara Caleno, for Monday night. The couple has been receiving medical treatment in Washington from a team with experience helping people return from captivity.

Corker previously traveled to Venezuela in 2015 only to be snubbed by Maduro. He said he was received more warmly this time thanks to the dogged mediation efforts of his staffer Caleb McCarry, who has known Maduro for 15 years. He also thinks the Venezuelan president is feeling “somewhat confident” after he was re-elected a little over a week ago, and may now be looking to reconcile with his critics by freeing political prisoners and modernizing the fast-collapsing socialist economy.

The Trump administration considered the election a “sham” after several of Maduro’s top opponents were barred from running. It said Holt’s release will have no change on U.S. policy.

Corker said he’s not sure where U.S.-Venezuelan relations are heading and declined to comment on bipartisan legislation before his committee that aims to further isolate Venezuela’s government. He said it’s important for the U.S. to continue to speak out against the “many, many bad things” the Maduro government has done.

Still, he thinks dialogue should never be discarded.

“I’m no softy on Venezuela. I’m not some person who thinks we ought to change our posture as far as punishing them for all the things that have occurred,” he said. “But at the same time, I know we engage with some of our most difficult adversaries and certainly was more than glad to engage on behalf of getting Americans home.”