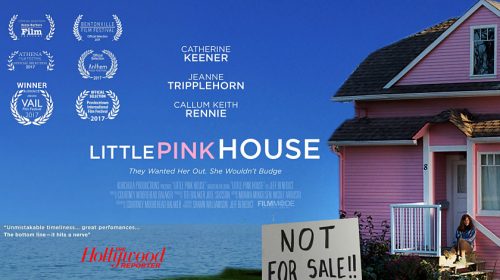 A new proposal by journalist Jeff Benedict to return the land once owned by Susette Kelo appeared in the pages of The Day newspaper from New London, Connecticut, The Volokh Conspiracy’s Ilya Somin reported over the weekend:

Jeff Benedict is a prominent reporter and author of Little Pink House, an excellent journalistic account of the events leading up to Kelo v. City of New London, the controversial 2005 Supreme Court decision in which the justices ruled that it is permissible for the government to take homes and other property in order to transfer it to new private owners for purposes of promoting “economic development.” His book was recently made into a powerful movie about the case (which I reviewed here).

It was 20 years ago this month that the City Council authorized the New London Development Corporation to prepare a plan to acquire and redevelop 90 acres on the Fort Trumbull peninsula where the Thames River joins Long Island Sound. For its part, Connecticut invested $75 million in the plan, which was intended to complement the $300 million global research facility that Pfizer opened next door to the redevelopment area in 2001.

But after acquiring nearly all of the targeted 90 acres, the city and the NLDC took an all-or-nothing approach to the few remaining lots owned by Susette Kelo, where sat her little pink house, and six neighbors. The prospect of jobs and increased tax revenues, the city argued, were “public benefits” worthy of using eminent domain.

Here’s the rub. Thirteen years after the Kelo decision, after all the condemning and evicting and bulldozing, nothing has been built on the land that was taken. Basically, an entire neighborhood was erased in vain. Meantime, all those vacant lots have become New London’s scarlet letter.

Thirteen years of inertia is long enough. For the sake of all parties – the city, the state, and the residents who were displaced – it’s time to turn the page and write an epilogue with a far more redeeming outcome.

Somin also wrote a book about the infamous Kelo takings, detailing the tribulations the single mother and her neighbors endured at the hands of the City and the New London Development Corporation. “The compensation they eventually received was not enough to offset suffering endured over a period of several years,” he wrote, adding:

Many of the displaced former residents still live in the region. Benedict reports that Susette Kelo is open to potentially moving back to New London if the City were to return the site of her famous “little pink house,” which became a nationally known symbol of the case. I do not know if this is true of the other plaintiffs in the case. But I think many might at least appreciate the conciliatory gesture Benedict advocates. Even if the displaced owners chose not to return after getting their land back, they could potentially sell it to developers or other businesses who could build new homes on the site or find some other productive use for it. At the very least, the outcome is likely to be better than the experience of the last thirteen years, during which this attractive and potentially valuable land has largely gone to waste. 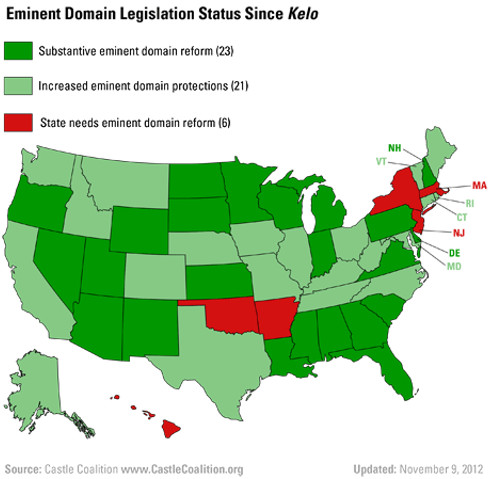 The bitter loss by the Susette Kelo and her neighbors in the village of New London triggered a nationwide wave of legislation to protect individuals’ property rights from the clawing hands of avarice municipalities – with no less than 44 of the 50 states moving to pass specific laws to clarify or otherwise limit the interpretation of ‘public use’ for the purposes of eminent domain.

The only six states who have done little-to-nothing to limit the state’s powers to forcibly take land from their owners in exchange for ‘just compensation’ are: New York, New Jersey, Massachusetts, Arkansas, Oklahoma, and Hawaii.