“Kustoff voted in favor of H.R. 1625, also known as the Omnibus Bill, that guarantees nearly half a billion dollars to Planned Parenthood through Title X,” Flinn pointed out.

“David Kustoff has yet to explain why he teamed up with Nancy Pelosi and other pro-choice liberals to fund a private organization, best known for aborting an estimated 330,000 babies per year,” Flinn said. “How can you claim to be a real conservative after choosing to fund Planned Parenthood? It’s incomprehensible and shameful,” Flinn added.

President Donald Trump recently proposed a rule that would prevent Title X funding from going to any clinics that provide abortions– such as Planned Parenthood. Flinn says he is ready to work with President Trump to make this a reality. 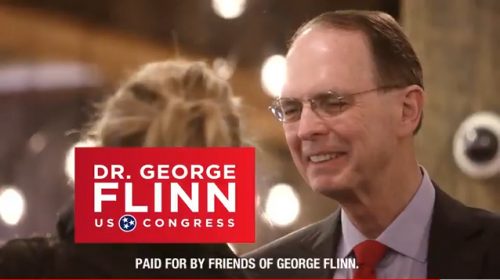 “As the 8th District Congressman, I will work with and help President Trump to stop our tax dollars from going to clinics that provide abortions,” Flinn said. “Despite a majority in the House and Senate, President Trump clearly doesn’t have the right Republicans in office, because Representatives like David Kustoff are choosing to fund Planned Parenthood.”
Flinn said West Tennessee needs a Congressman who will work with President Trump to protect the lives of our unborn. “We have a President who promised that we could count on to be pro-life, now we just need a Congressman from the 8th District who is just as determined to keep that same promise,” Flinn noted.

In his 2016 campaign commercials, David Kustoff promised that he would be “pro-life” and “pro-family,” but his vote to fund Planned Parenthood reneged on that promise. “Kustoff is great at making promises,” Flinn said, “it’s keeping them that is a problem for him.”

The new television commercial is airing on broadcast and cable stations in West Tennessee.