SMYRNA, Tennessee–On Saturday, the Blue Angels honored their colleague, pilot and Marine Corps Captain Jeff Kuss, who died tragically in a plane crash during a training exercise in Smyrna two years ago. 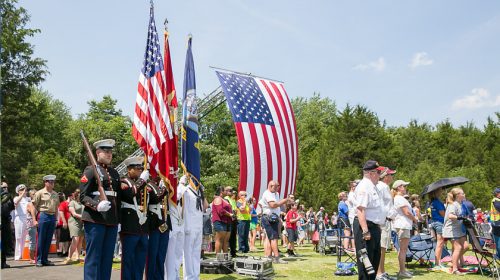 “A Blue Angel F/A-18C Hornet [was] installed at the Capt. Jeff Kuss USMC Memorial at Lee Victory Recreation Park on May 30,” according to the memorial’s website:

The Blue Angel aircraft is on permanent loan from the National Naval Aviation Museum in Pensacola, Florida and will be on display as part of the Capt. Jeff Kuss USMC Memorial. The memorial is dedicated to Marine Captain Jeff Kuss who on June 2, 2016, at the age of 32, lost his life in a tragic in-flight accident while flying as Blue Angel #6 in practice for the Great Tennessee Air Show. 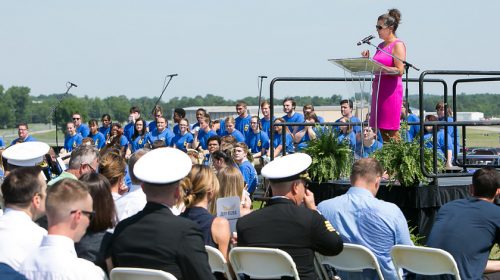 Sailors from the Navy Operation Support Center in Nashville, and Marines from Kilo Company, 3rd Battalion, 23rd Regiment followed with the presentation of colors. The Stewarts Creek High School Chorale and Band then performed the National Anthem.

A flyover by five F/A 18C Hornets, all with Marine Corps pilots, followed.

He was followed by Navy Captain Ryan Bernacchi, Director of the CNATRA Blue Angels Transition team. 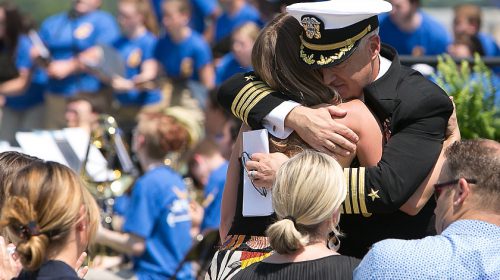 Bernacchi said he was there “to honor and celebrate the life of our #6, Captain Jeff Kuss.”

“In the past two years…I’ve spent countless hours trying to make sense of it. I cannot pretend to have all the answers for you. I do know that this memorial is part of that answer,” Bernacchi said.

He then cited a 1937 article by Walter Lippman on the disappearance of aviator Amelia Earhart in which Lippman  wrote, “the world is a better place to live in because it contains human beings who will give up ease and security and stake their own lives for pursuits they believe in. They are brave, without cruelty to others.” 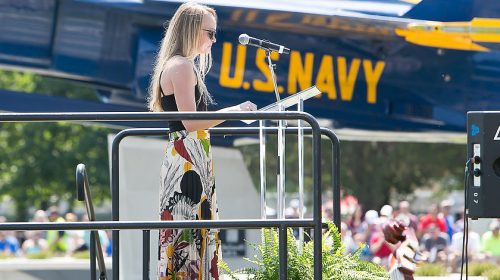 Christina Kuss, the widow of Captain Jeff Kuss, was the final speaker. In her speech, she expressed her gratitude to the Blue Angels for their support after the death of her husband.

“This is extraordinary. Thank you all for being here,” she began.

“He was our big guy, who made life fun,” Kuss said of her late husband.

He was naval aviator, but “his deeper passion was his family,” she said, adding that, “His purpose was grand. . . I miss his sound mind, his intelligence.” 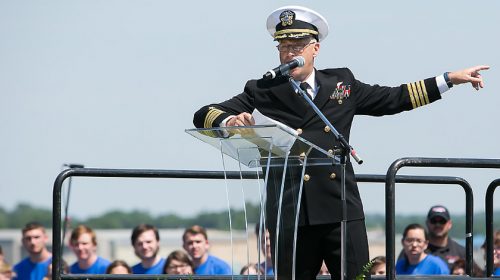 The dedication clased with the raising of flags by the Kuss family, accompanied by the Town of Smyrna Fire Department Honor Guard, and a performance of the Marine Corps hymn by the Stewarts Creek High School Choral and Band.

At the close of the dedication ceremony, members of the public were invited to view the Captain Jeff Kuss USMC Memorial. 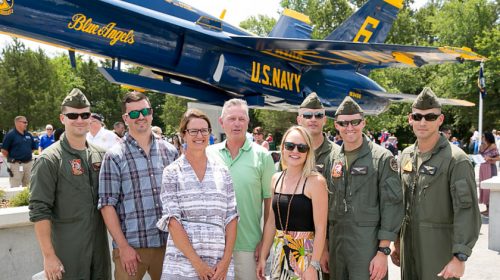