“We’re in the midst of all this election season heading into the August 2 primaries on the Democrat and Republican sides. A lot of candidates, particularly on the Republican side, are talking about how pro life they are,” Tennessee Star Political Editor Steve Gill said on Thursday’s edition of the Gill Report, broadcast live on WETR 92.3 FM in Knoxville.

“Some of these folks who are talking about being so pro-life are the same ones that have voted to fund Planned Parenthood.It’s important to look at what they do, not what they say,” Gill noted. 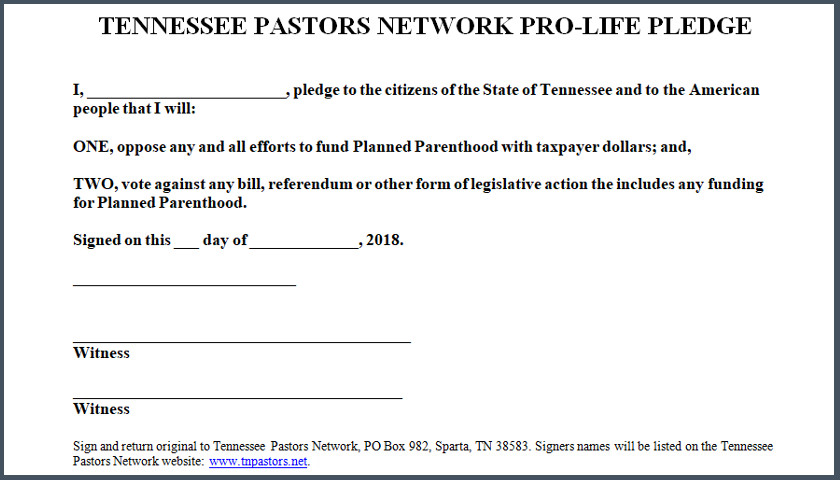 “During campaign season, a lot of candidates SAY they are pro-life in order to get votes, then they get to Nashville or Washington, DC and fail to live up to their promises,” TPN President Walker said in the statement

“The Tennessee Pastors Network Pro-Life Pledge puts their promise in writing and we will display their broken promise in black and white in their next election if they betray the voters of Tennessee who trusted them to defund Planned Parenthood,” Walker added.

Walker added that the Pledge is simple, clear and direct, with no loopholes. “Planned Parenthood uses millions of taxpayer dollars to fund their operations that kill innocent children each and every day. Despite repeated promises to defund it, too many of our elected officials say one thing on the campaign trail and betray us after they get elected. Those who refuse to sign this simple written Pledge are making it clear that they WILL continue to vote to fund this despicable practice.”

“You’re going to have it right there in black and white so in their next campaign that broken promise is going to be easier to display,” Gill noted in his radio broadcast.

You can listen to the audio of Steve Gill on this topic here:

You can download a copy of the Tennessee Pastors Network Pro Life Pledge and present it to a candidate in your area for signature here: