In the final segment of Friday’s Gill Report, broadcast live on WETR 92.3 FM in Knoxville, Steve Gill reflected on the life and times of legendary Vols sports broadcaster, John Ward.

Ward passed away this week at age 88 after a lengthy illness.

The segment opened up with a 1995 recording of Ward calling a classic moment in Vols football history: a first-down, first play touchdown by then-quarterback Peyton Manning and his wide receiver, Joey Kent.

“What did he do?” Ward said in his trademark galloping cadence – the live Vols fans roaring in the background – “All he did was score!”

“The Voice of the Vols has passed,” Steve Gill said, “But his legacy lives on as long as someone shouts ‘BOTTOM’ whenever a Tennessee basketball player scores a basket; or ‘Give him six!’ when they cross the checkerboard; or ‘It’s football time in Tennessee!’ when those crisp, Fall Saturdays begin.”

You know, when I was a kid – eighth or ninth grade – we lived in Colonial Heights Virginia, near Richmond, and late at night I could tune in and 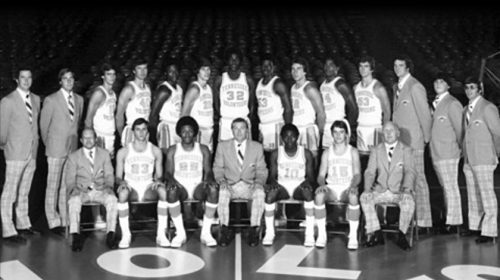 just barely catch the Vol basketball games. I would have to actually turn the dial sightly to keep it right on the line when I could just barely hear the scratchy sound of John Ward’s voice all the way from Knoxville, Tennessee, callung UT basketball games.

I didn’t have any idea at the time I would later be wearing orange or playing during the Ernie and Bernie era and having John Ward actually call games that I played in.

Not very many – but enough to know that John Ward had to say my name a few times, including scoring a few buckets – a few ‘bottoms’ – of my own.

He was a class act. He was fun to be around. He was a professional in every sense of the word; was always extremely prepared.

He never met a fan he wasn’t willing to give an autograph to or say hello to in that deep, resonant radio voice.

He was the Voice of the Vols and couldn’t go to a game when you wouldn’t see people – when John Ward was calling the game – with their earphones, listening to John as they were watching what was happeing on the field.

When I was at WLAC, we would broadcast the UT games during that time, and we would have to turn off the seven-second delay – even thought it was probably a violation of FCC rules – because fans wanted to be able to watch TV and listen to John Ward and not have that seven-second delay in what he was saying.

So even though we would have to constantly fight with the management at the station, they knew that risk of an FCC fine – because they knew that John Ward wasn’t going to say anything wrong anyway – was worth the risk so that fans would tune in and watch in the stadiums or watch on TV and listen to John Ward.

Listen to the segment: