Many political observers have been surprised that an anticipated barrage of negative campaign ads have been held back thus far in the Tennessee Republican Primary for Governor. The wait is over as Congresswoman Diane Black has unleashed a new attack at that hits two of her opponents, Bill Lee and Randy Boyd as being “two moderates.” While the ad is particularly scathing in its treatment of Boyd, the inclusion of Lee in the spot seems to confirm that Lee is enjoying a surge in recent polls — which is particularly damaging to Black’s Middle Tennessee numbers. 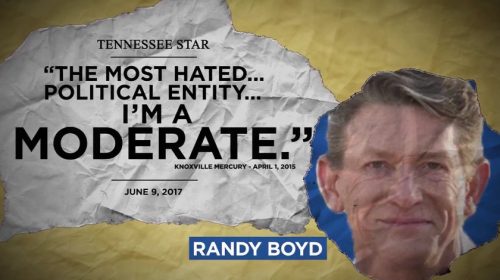 The transcript of the new Black ad, which began airing today, reads as follows:

“Diane Black, endorsed by the NRA. And she helped write Trump’s tax cut.

Is Diane Black “too conservative”? Randy Boyd says she is. But Randy Boyd also disavowed Donald Trump in 2016. Boyd even calls himself the “most hated political entity — a moderate.”

Bill Lee’s a moderate too. He pushed for a liberal Nashville Mayor who tried to make Nashville a sanctuary city.

This race is simple. Two Moderates or Conservative Diane Black.”

Tennessee Star Political Editor Steve Gill said the ad is consistent with two major themes that we are seeing in campaigns throughout the state: candidates claiming they are more aligned with President Trump and more anti-illegal immigration than their opponents. “The last several weeks we have pointed out that both the Black and Boyd campaigns believed they were leading in the polls and neither wanted to fire the first shot and risk a backlash. The first shot has now been fired by the ac-tual campaign teams,” Gill noted.

“It is a bit surprising that there has been so little activity by independent expenditure committees in Tennessee this campaign season,” Gill added. “Other than a couple of radio ads and a single television spot run by Jobs for Tennessee, there are not any big ad buys that have been placed by any outside groups at this point. That may change soon.”