The battle for the Republican nomination for governor in Tennessee is now a three-way race, with Williamson County businessman Bill Lee surging into a strong third position, with 20 percent. Speaker of the Tennessee House of Representatives Beth Harwell (R-Nashville) is no longer a factor in the Republican gubernatorial primary, coming in a distant fourth position with only 7 percent of the vote. Only 13 percent of poll respondents said they were undecided.

The poll of 1,040 likely Tennessee Republican primary voters was conducted for The Tennessee Star by Triton Polling and Research over a four day period beginning Monday June 25 and ending Thursday June 28 and has a margin of error of 3.1 percent.

At that time Diane Black had a ten point lead over Randy Boyd, with Black receiving the support of 21 percent of likely Tennessee Republican primary voters, followed by Boyd in second place with 11 percent. Rounding out the bottom tier of candidates were Speaker Harwell with 6 percent, Bill Lee with 4 percent, and then candidate for Governor former State Senator Mae Beavers (R-Mt. Juliet) with 3 percent. Beavers later dropped out of the race and is now running for Wilson County Mayor.

The new Tennessee Star Poll released today indicates that Boyd has moved into the lead with 32.6 percent, followed by Black with 26.9 percent, Lee with 20.3 percent and Harwell at 6.9 percent. These figures underscore the reason why Black launched an attack ad targeting both Boyd and Lee earlier this week.

Tennessee Star Political Editor Steve Gill notes that with only 13 percent of voters being undecided the support levels for each candidate are starting to firm up with early voting beginning a little over two weeks from now on July 13.

“Each candidate has essentially secured those who like them, now they have to pull people away from their opponents in order to move the dial which is why you are starting to see the attack ads fly,” Gill says.

“Diane Black has a Bill Lee problem and I expect to see them increasingly start attacking each other in the next week or so. Lee has to bring her down in order to catch up, and she has to stop his momentum immediately while also bringing Boyd’s numbers down. The bloodletting most were expecting is about to begin in earnest.”

“It is shaping up as a three-way race, as Harwell hasn’t moved in the past 6 months,” Gill adds. “And as the noise level goes up as we enter the last 5 weeks to the August 2 primary election, it will be increasingly difficult for candidates to get the voter attention needed to produce big moves.”

Early voting in the August 2 primary election begins on July 13 and continues until July 28.

The winner of the Republican primary will face off against the winner of the Democratic primary, in which former Nashville Mayor Karl Dean is favored over State Rep. Craig Fitzhugh (D-Ripley), in the November general election for governor.

The Tennessee Star Poll also included questions on various issues and the approval/disapproval ratings for several Tennessee political figures that will be shared over the next several days.

You can read the first page of the top line summary of the poll results here: 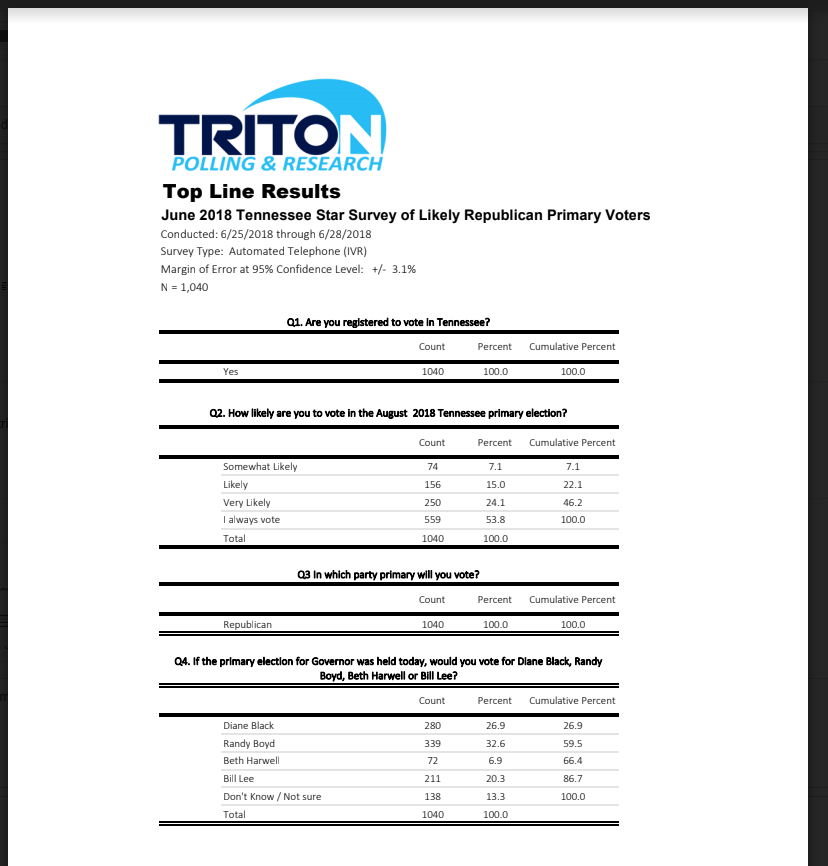