NASHVILLE, Tennessee – Republican candidate for Tennessee House of Representatives District 56, Joseph Williams, delivered comments and responses to numerous questions filled with conservative and constitutional “red meat” that was well received by a group of Nashville Heritage Action Sentinels and guests at their monthly meeting last Thursday.

The Nashville Sentinel group, though fairly recently formed and continuing to expand, has had several meetings with Senator Bob Corker’s office and been active in a variety of recent issues affecting Nashville including “Resign Now! Megan Barry,” defeating the $9 billion transit plan and volunteering for the Carol Swain for Mayor campaign.

Williams is running for the seat vacated by Beth Harwell who has held the seat for the last 30 years and has served as Speaker of the House since 2011. Harwell gave up the seat as she is instead pursuing the office of the state’s chief executive. Williams will face off against fellow Republican Brent Moody, a dermatologist, in the August 2, 2018, primary. 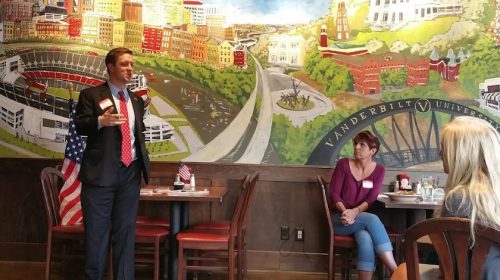 In his opening comments to the group, Williams introduced his wife Palmer, who also attended the gathering, and talked about the most significant influence in his life being the older brother of a special needs younger sister, and how that impacts his view of the world and speaking up for the underdog before telling about his educational and professional background.

After teaching civics and U.S. History for two years in Davidson County’s White’s Creek High School, Williams went back to Vanderbilt University, where he originally obtained his undergraduate degree, to earn his law degree specializing in constitutional law. While at Vanderbilt, he began his work at public interest law firm American Center for Law and Justice, more commonly referred to as ACLJ. Palmer, who also earned a Vanderbilt law degree before her husband, joined him at ACLJ specializing in international human rights and right to life issues. They have both since left ACLJ, starting their own law firm about a year ago.

The biggest case Williams worked on while at Vanderbilt that got him working with Jay Sekulow, former Chief Counsel of ACLJ, and landed him the job offer, was the Obama Administration’s unconstitutional targeting of grassroots conservative groups that involved more than 40 clients in 22 states, four of which were in Tennessee.

Williams says that when he’s asked about why he is running, “One of the big reasons is because I learned teaching at White’s Creek about the various governmental systems that are failing every day citizens.” Williams elaborates, “It’s not just our failing education system, it is our welfare system, it is our foster care system.” Though he acknowledges there are “a lot of well-meaning people in all of these systems,” Williams says “They’re trapped in these failing governmental and societal structures.”

Through his legal experience, Williams “learned a lot about how unelected, unaccountable bureaucrats can target every day Americans.” Williams also realized that “elected leaders in Congress abdicate their responsibility and leadership, because they’re more worried about getting reelected than doing what’s right” and that it happens at the state level as well.

After having taught in classrooms Williams says he knows what that’s like with education policy, which he cites, “is a third of the state budget, and yet less than half of our third-graders can read.” Williams added, underscoring the gravity of the situation, “That’s how our prison system projects how many beds they’re going to need in the future – literacy is that important. And we need elected leaders that understand that.”

Williams elaborated on his reasons for pursuing an elected position in the State House, “I’m not running for office because of statistics like these, although those matter. You all know as conservatives that we’re talking about important, fundamental things like freedom, human dignity and that behind the statistics are individuals with faces and names and hopes and dreams and things that keep them up at night.”

Williams then relayed a story about a troubled young man who was one of his students at White’s Creek High School that had been to “10 foster care homes in four years and kicked out of every other bad high school in Nashville.” While Williams said he wished there had been a happy ending, the student was also kicked out of White’s Creek High School and Williams didn’t know what happened to him.

Williams concluded, “He doesn’t have anyone on Capitol Hill spending tons of money on him.”

After covering a lot of ground in the initial ten minutes of opening comments, Williams then took questions for more than an hour, with everyone enthusiastically staying past the scheduled end time, covering topics ranging from sanctuary cities to short-term rentals and block chain technology.

Williams poked fun at himself being a “geek” as a civics and U.S. history teacher and a constitutional attorney and answered questions from that perspective, saying that issues like sanctuary cities and short-term rentals are complicated, that the state legislature has remedies at its disposal but they have to be balanced with limited government and local control.

“Fundamentally, what makes America so special,” Williams explained on the topic of short-term rentals, a hot topic in Nashville, “is the idea of the protection of property rights. That when you buy property you have the right to do with it what you want.” He continued, “What’s missing in that thought is when did the people around that property purchase their property, what were their expectations of property rights and what was going to be around them when they did so.”

Williams concluded that it’s a balancing act, “The state needs to maintain property rights, but not at the expense of the property rights of everyone else.”

When asked about the IMPROVE Act on the eve of the next incremental increase in the gas and diesel taxes, Williams said that with regard to taxes, his thoughts are simple, “I got them from my Dad from the time I was really young.” Williams relayed,

My Dad’s a cheapskate, all about saving, all about fiscal responsibility. He grew up with a family who had seven kids in eight years and had to be frugal and that’s passed on to him. He’s always told me since I was a little kid a very simple concept. Before the government ever increases any taxes of mine or before they ever add any new taxes, I ask them one thing and one thing only: That they show me that all the money they’re already taking from me they are using it efficiently and effectively. And, he said, and Joseph, one more thing. No government at any level will be able to do that, which means they should never add any new taxes or increase any taxes. That’s my basic principle.

While he was given campaign advice to not talk about occupational licensing as a boring topic that no one wants to hear about, Williams is taking the opposite approach. His point is, “If I don’t talk about it who will? That’s why nothing ever gets fixed.” Williams contends, occupational licensing in Tennessee “as the 13th worst in the country,” is “one of the biggest things holding Tennesseans down.” As a new business owner, Williams has felt the effects first hand of government bureaucracy by having to complete three different on-line registrations to pay one single tax.

Williams was adept at giving thorough responses on all the topics and issues he was asked about, but says his number one issue is education. He hopes that recent Supreme Court decisions will open up opportunities for reform and has a fundamental belief that with regard to any subject “all options should be on the table.”

Approaching the 4th of July, Williams reflected, “What makes America so special, different from every other civilization in human history was that our founding fathers didn’t risk life and liberty and put everything on the line because they agreed on everything.  They did it because they realized the importance of fighting a tyrannical government that said you aren’t allowed to hash these things out peacefully with freedom and liberty and free market place ideas.”  Putting perspective on the current state of political discourse, he added,

We have this recency bias where we say woe is us, we live in the worst time. We kind of lose our perspective on that, but one thing I kind of fear about that is that people are forgetting that that is something that makes America special.

The key is to defend someone else’s right to disagree with you and then ask them in return to defend your right.

Both Joseph and Palmer expressed that there is a “huge opportunity” for conservatives with the younger generation by being “winsome,” and that it is important to retain the only Republican “urban” seat, not just in Nashville, but in the entire state. They both have spent a lot of time in environments where there aren’t a lot of conservatives, but “aren’t scared to take the conservative message,” presenting it as, “Let me tell you why you should care about the things I care about and why you may be a conservative.”

The winner of the Republican primary on August 2, with early voting from July 13 to July 28, will face off against the Democrat opponent, Bob Freeman, in a district that voted almost entirely against the transit plan on May 1. Bob is the son of businessman, former Nashville mayoral candidate and former campaign fundraiser for Hillary Clinton and Barack Obama, Bill Freeman.