President Trump recently held a conference with family members of U.S. citizens killed by illegal immigrants. The parents of nine people slain by such immigrants spoke about their family’s experiences, and Trump presented an array of government data on criminal immigrants and stated:

I always hear that, “Oh, no, the population is safer than the people that live in the country.” You’ve heard that, fellas. Right? You’ve heard that. I hear it so much. And I say, “Is that possible?” The answer is it’s not true.

In response, the Associated Press published a “fact check” claiming that illegal immigrants are more law-abiding than the general public. Various media outlets, such as the New York Times, Yahoo!, and a number of NBC affiliates published this article. The Washington Post ran a similar story, and other media outlets and so-called fact checkers have made similar claims in the past.

The truth, however, is that comprehensive, straightforward facts from primary sources – namely the Obama administration Census Bureau and Department of Justice – prove that illegal immigrants are far more likely to commit serious crimes than the U.S. population. Studies that claim otherwise typically suffer from fallacies condemned by academic publications about how to accurately analyze data.

The Most Concrete Facts

Data on illegal immigration and crime is often clouded, precisely because these are unlawful activities where perpetrators seek to hide their actions. Also, governments sometimes fail to record or release information that could be or has been obtained. The Obama administration, in particular, refused to release the names of convicted immigrant sex offenders and hid other details about crimes committed by immigrants.

Nonetheless, a combination of three material facts sheds enough light on this issue to draw some firm conclusions.

First, U.S. Census data from 2011 to 2015 shows that noncitizens are 7% more likely than the U.S. population to be incarcerated in adult correctional facilities. This alone debunks the common media narrative, but it only scratches the surface of serious criminality by illegal immigrants.

Second, Department of Justice data reveals that in the decade ending in 2015, the U.S. deported at least 1.5 million noncitizens who were convicted of committing crimes in the U.S. (Table 41, see pages 107-115). This amounts to 10 times the number of noncitizens in U.S. adult correctional facilities during 2015.

Third, Department of Justice data shows that convicts released from prison have an average of 3.9 prior convictions, not including convictions that led to their imprisonment (Table 5, see page 6). This means that people in prison are often repeat offenders—but as shown by the previous fact, masses of convicted criminals have been deported, making it hard for them to reoffend and end up in a U.S. prison.

In other words, even after deporting 10 times more noncitizens convicted of crimes than are in U.S. prisons and jails, they are still 7% more likely to be incarcerated than the general public. This indicates a level of criminality that is multiplicatively higher than the U.S. population.

On the other hand, there is uncertainty about the exact number of noncitizens in the U.S., and Census figures are almost surely low. Hence, the incarceration rate of illegal immigrants is likely not twice as high as the U.S. population. Nevertheless, this is only the tip of the iceberg, because the U.S. continually deports massive numbers of illegal immigrant convicts.

According to the AP, one of the supposed reasons why Trump is wrong is that “Ruben Rumbaut, a University of California, Irvine sociology professor, co-authored a recent study that noted crime rates fell sharply from 1990 to 2015 at a time when illegal immigration spiked.” This study is a quintessential example of data misuse, because it confuses association with causation and cherry picks a timeframe that creates a misleading impression.

Between 1990 and 2013, the foreign-born share of the U.S. population grew from 7.9 percent to 13.1 percent and the number of unauthorized immigrants more than tripled from 3.5 million to 11.2 million.

Such data reveals nothing about the effects of illegal immigrants on crime, because as explained in a textbook about analyzing data:

Association is not the same as causation. This issue is a persistent problem in empirical analysis in the social sciences. Often the investigator will plot two variables and use the tight relationship obtained to draw absolutely ridiculous or completely erroneous conclusions. Because we so often confuse association and causation, it is extremely easy to be convinced that a tight relationship between two variables means that one is causing the other. This is simply not true.

Numerous other academic writings say the same, and this basic fact is taught in high school statistics. For example, the Common Core math standards require students to “distinguish between correlation and causation.” Yet, Rumbaut and two other PhDs authored this flawed study, and the AP and PolitiFact uncritically quoted it. 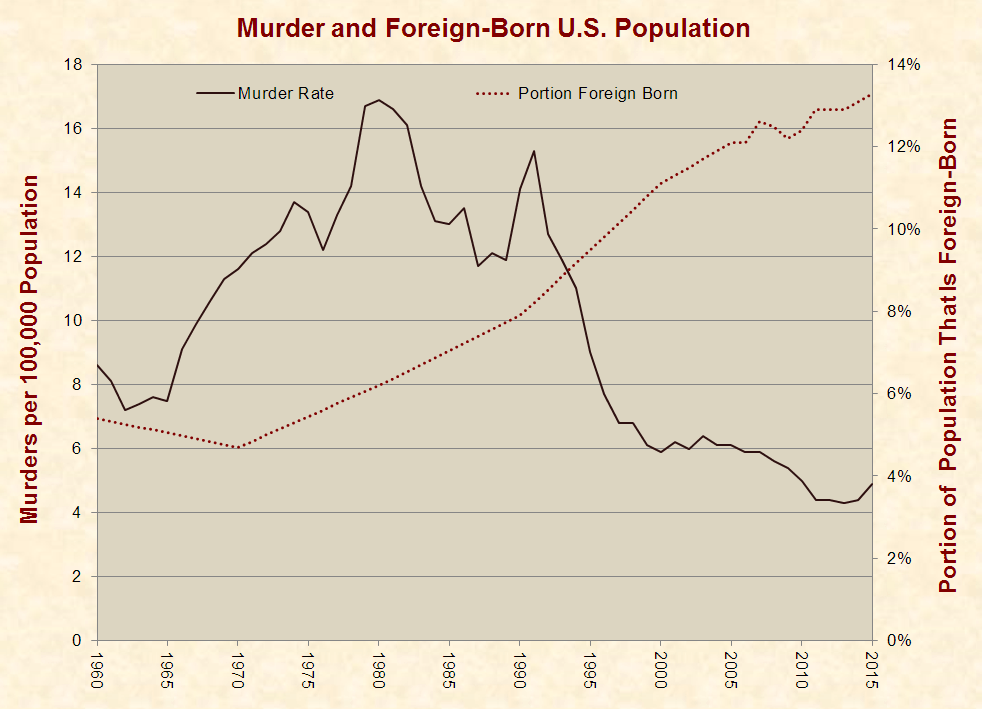 The Rumbaut study has another major problem, because it cherry picks a timeframe that diverges from the larger picture. Contrary to its narrative that growing numbers of immigrants during 1990–2013 caused crime to fall, the number of immigrants also grew during the 1970s and 1980s, but during this time, the homicide rate rose, fell, and rose again.

In the words of another academic book about data analysis:

The AP also cited another study that suffers from much the same shortcomings. Published in the journal Criminology, it examines state-level data from 1990–2014 and finds that “increases in the undocumented immigrant population within states are associated with significant decreases in the prevalence of violence.” Besides using a timeframe when crime fell sharply, these statistics are merely associations, and the authors admit “they are hardly conclusive.”

Thus, they take their study further by using a statistical technique called a “regression” to control for factors besides immigration that could affect crime rates. Based on this, they find that “undocumented immigration over this period is generally associated with decreasing violent crime.”

Again, this is just an association, and it does not show that illegal immigration reduced crime, because other factors are undoubtedly at play. As detailed in a book about regressions, they share “an additional problem with all methods of statistical control,” because “there’s no way that we can measure all the variables that might conceivably affect” an outcome.

In this case, the outcome is general crime levels, and their causes are notoriously difficult to identify. In the words of an Oxford University Press textbook on criminology, this is “because there are simply too many unknowns and unmeasured dark figures of crime and explanation to enable us to draw valid and reliable conclusions from research.”

Moreover, illegal immigrants comprise only 4% of the total U.S. population in this study. Yet, the study seeks to determine their criminality by measuring total crime rates for the entire populations of the states. That is beyond far-fetched, because even small changes in crime among the other 96% of the population could easily overwhelm any effects from illegal immigrants.

The AP also cited a study from the “libertarian think tank Cato Institute” as evidence that “people here illegally are less likely to commit crime than U.S. citizens,” but the study is a classic example of one that misleads by ignoring relevant facts.

The study, conducted by Cato policy analyst Alex Nowrasteh, examines arrests and convictions of illegal immigrants in the state of Texas. Unlike sanctuary jurisdictions that refuse to record and/or publish such information, Texas collects and makes this data publicly available. By using this data and immigrant population estimates, the study finds that in 2015, the conviction rates of illegal immigrants in Texas for:

In isolation, these statistics vastly understate the criminality of illegal immigrants—first and foremost—because they fail to account for the fact that hordes of criminal immigrants are constantly deported. This is especially relevant when it comes to crimes like murder, in which the vast bulk of perpetrators have previous criminal records. For example:

These facts have even greater importance in a state like Texas, which readily cooperateswith the Department of Homeland Security to deport criminal immigrants. As a participant in the Department’s Priority Enforcement Program, Texas investigates the immigration status of all arrestees and helps immigration authorities “take custody of individuals who pose a danger to public safety before those individuals are released into our communities.”

In Texas, there’s almost no chance that illegal immigrants could be arrested nine times and still be in the state and on the loose. In all likelihood, they would either be deported or locked up long before then. This would explain why the murder rate for illegal immigrants who remain in Texas is lower than that of U.S. natives.

Also, unauthorized immigrants are more apt to literally get away with murder than the general population. This is because murders committed by minorities are less likely to be solved. In the sanctuary city of Chicago, for example, the portion of murders that resulted in a suspect being identified and acted upon by the criminal justice system was 19% in 2016, as compared to a nationwide average of 59%.

On top of this, information from the Social Security Administration and other sources shows that most illegal immigrants engage in identity fraud. This is a federal felony punishable by up to five years in prison.

All of this proves that illegal immigrants have much greater levels of serious criminality than their arrest and conviction rates indicate. Those metrics only tell part of the story, particularly in a state like Texas that consistently works with the Department of Homeland Security to deport criminal immigrants.

Beyond the fallacies in this AP “fact check,” various journalists and scholars have misled the public about this issue by using bait-and-switch tactics and statistical techniques that are inappropriate to the data. Per another book about data analysis, “Statistical analysis is very easy to misuse and misinterpret. Any method of analysis used, whenever applied to data, will provide a result, and all statistical results look authoritative.”

When it comes to illegal immigration and crime, media outlets often lavish attention on fatally flawed studies while ignoring straightforward, comprehensive, and rigorously documented facts about this issue. Such facts show that Trump is correct on this point. Illegal immigrants are much more likely to commit serious crimes than the general public.

However, the opposite is true when it comes to legal immigrants, especially those who become U.S. citizens. They are 79% less likely than the general public to be incarcerated in adult correctional facilities. In this case, deportations are not a factor, because immigrants who become citizens generally cannot be deported unless they are stripped of their citizenship, which is a rare occurrence.

There’s good reason why immigrant citizens are so law-abiding. To become U.S. citizens, they must pass a full FBI background check, demonstrate they have good moral character, show they will not be a financial burden on taxpayers, and take a public oath of allegiance to the U.S. Constitution. Illegal immigrants avoid such vetting, and this allows masses of criminals to enter the U.S.