Tennessee Star Political Editor Steve Gill, on Wednesday’s Gill Report broadcast live on WETR 92.3 FM in Knoxville, discussed the Biblical protest by an Indianapolis church and its misguided interpretation of the holy family as immigrants. 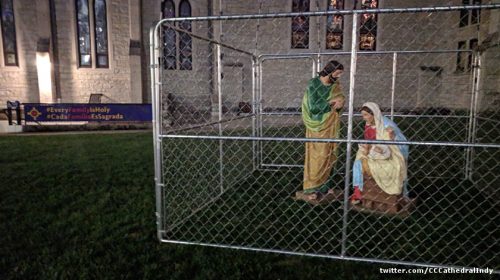 “An Indianapolis church is putting Jesus, Mary and Joseph in a cage, to protest president Trump’s zero tolerance policy cracking down on illegal immigration,” stated Steve Gill; adding, “Apparently the church is incapable of understanding the term ‘illegal,’ you know, ‘criminal behavior.’ Apparently, we shouldn’t put people in prisons if they break the law.”

I wonder if somebody broke into the church and stole all the church items and stole the money in the church whether they would prosecute or just turn the other cheek and say we shouldn’t jail anybody because it might separate them from their families.

Anyway, Christ Church Cathedral constructed a cage made of chain link fence on its lawn overnight and placed statues of Jesus, Mary, and Joseph inside to represent Christ and the holy family being detained by immigration authorities.

The church tweeted out yesterday morning, ‘On our lawn tonight, we place the holy family in an ICE detention.’

Steve Carlson, the church’s rector and dean, told the Indianapolis Star that the display was meant to serve as a protest to Trump’s policy of housing illegal immigrant families in detention centers for illegally crossing the U.S. border. ‘I know what the bible said,’ Carlson said. ‘We are supposed to love our neighbors as ourselves.’

Well Reverend Carlson, the Bible said a lot of other stuff too. The idea that somehow Jesus, Mary, and Joseph were homeless, in the night that they entered Bethlehem, I guess Jesus joined them later, but the idea that Mary and Joseph were homeless is just complete ignorance of what the bible said. They were not homeless, they were traveling, they found no room in the inn. They were out of town.

You know if you go to a super bowl town the week of the super bowl and you can’t find a hotel room and didn’t make reservations before if you can’t find a hotel room that doesn’t make you homeless. Means your out of town and you should have made a hotel reservation early. Jesus, Mary, and Joseph were in the stable because the inn was full while they were traveling at the behest of the government to comply with the census.

It might be interesting to know if folks at this particular church leave their doors open, I mean their personal homes, so that their neighbors can come take whatever they want. Again, you’re supposed to love your neighbors as yourself. Shouldn’t you have to give all your stuff to your neighbors.

I bet they drive some pretty nice cars at this church, wouldn’t it be nice to know.