During recent teacher walkouts in Oklahoma that captured national attention, many major media outlets reported misleadingly small figures for teacher pay. By failing to reveal all aspects of teacher compensation, these outlets hid the true costs to taxpayers—which now amount to an annualized average of about $120,000 for every public school teacher in the United States.

CNN, for example, published an article by Bill Weir claiming that in “most districts” of Oklahoma, “a teacher with a doctorate degree and 30 years’ experience will never make more than $50,000 a year.” That claim, which CNN neglected to document, is at odds with comprehensive data from the U.S. Department of Education and the U.S. Department of Labor. This information for Oklahoma and the entire nation follows.

For the 2016–17 school year, the Department of Education reports that the average salary of full-time public school teachers was $58,950 in the U.S. and $45,245 in Oklahoma. Those figures generally exclude benefits, such as health insurance, paid leave, and pensions. These are typically much higher for government employees than private sector workers.

According to the Department of Labor, benefits comprise an average of 33% of compensation for public school teachers. Including benefits, teachers’ average annual compensation jumps to $87,854 in the U.S. and about $67,429 in Oklahoma. This excludes unfunded pension liabilities and certain post-employment benefits like health insurance, which are not measured by the Department of Labor.

That, however, still doesn’t tell the complete story, because full-time private industry employees work an average of 37% more hours per year than full-time public school teachers. This includes the time that teachers spend for lesson preparation, test construction and grading, providing extra help to students, coaching, and other activities. Unlike less rigorous studies, this data from the Department of Labor is based on detailed records of work hours instead of subjective estimates about how long people think they work.

Accounting for the disparity between the annual work hours of full-time public school teachers and full-time private industry workers, the average annualized cost of employing teachers in the 2016–17 school year was $120,578 per teacher in the U.S. and about $92,545 in Oklahoma. Again, this doesn’t include certain post-employment benefits.

There is yet more to this picture, because the costs of living vary between states. Adjusted for this, the average annualized immediate compensation of Oklahoma teachers in 2016–17 was about $102,943, or roughly twice what CNN says “a teacher with a doctorate degree and 30 years’ experience will never make” in “most districts” of Oklahoma. 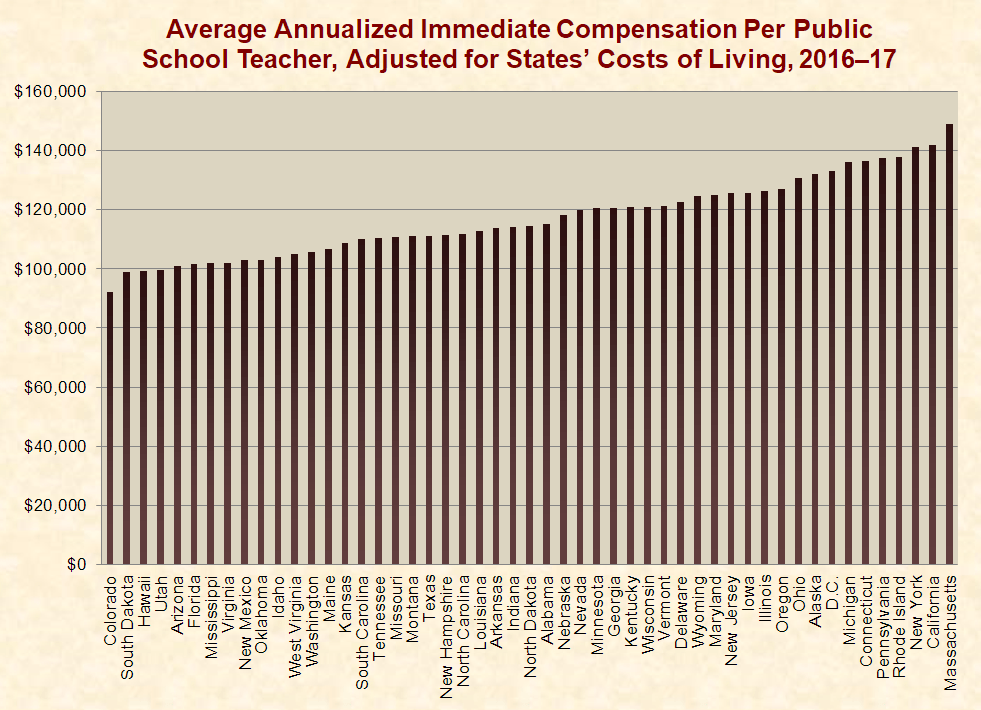 Furthermore, a few days before the walkouts began, the state of Oklahoma passed a law raising the average salary of teachers by $6,100.

Nationally representative polling data suggests that the media has serially misinformed voters about the costs of public schools.

According to the latest Department of Education data, governments in the U.S. spend an average of $13,119 per year for every student enrolled in K–12 public schools. Adjusted for inflation, this spending has risen by 22 times since 1919, and it omits three significant categories of education expenses: 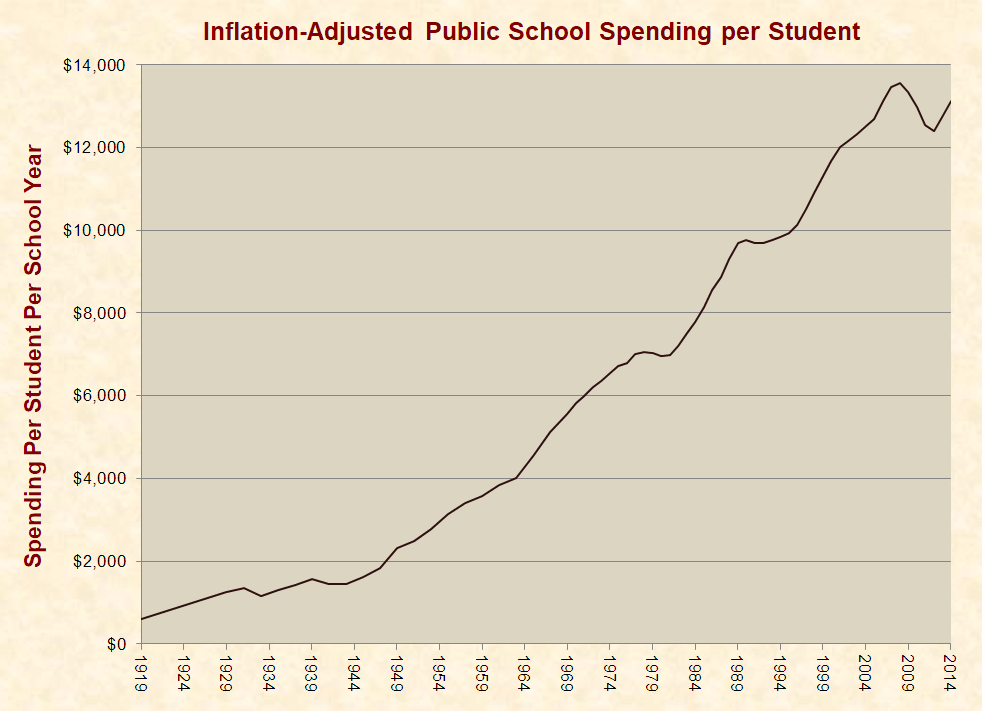 Given that the average class size in U.S. public schools is 24 students, spending per classroom in the 2014–15 school year averaged about $315,000. Yet, a nationally representative poll commissioned in 2017 by Just Facts found that 49% of voters think the average spending per public school classroom is less than $150,000 per year. This is lower than half the actual amount.

Likewise, a 2017 poll commissioned by the journal Education Next and the Kennedy School of Government at Harvard University found that the average adult believes their local public schools spend $8,877 per student. This is 32% less than the U.S. average.

Journalists create misperceptions of school spending when they avoid straightforward data and cherry-pick baselines to make comparisons. Caitlin Emma of Politico, for example, writes: “Since 2008, about 28 percent of [Oklahoma] state per pupil funding, adjusted for inflation, has been cut, according to the Center on Budget and Policy Priorities, a think tank.” By not reporting the actual spending and by choosing 2008 as a baseline—which happens to mark the highest year for education spending in the history of the U.S.—she leaves a glaringly false perception in the minds of her readers.

Thomas Jefferson, the primary author of the Declaration of Independence and an early visionary of public education, wrote that “the diffusion of knowledge among the people” is the only “sure foundation” for the “preservation of freedom and happiness.” Thus, when media outlets misinform people about education, they thwart the very purpose of education.