The Brentwood HomePage provided these details:

After adding in votes from absentee ballots and nursing homes, there were 911 people voted Friday. . .

Republicans made up the vast majority of voters. The Williamson County Commission reports that 606 people voted in the Republican primary while 297 voted in the Democratic primary. Eight people voted only in the general election.

Supporters of several candidates, including State Senator Dr. Mark Green (R-Clarksville) , Rep. Marsha Blackburn (R-TN-07) , and Jeff Ford,  stood under a tent just beyond the 100 foot boundary with signs for their candidate of choice at the Williamson County Administrative Building in Franklin. 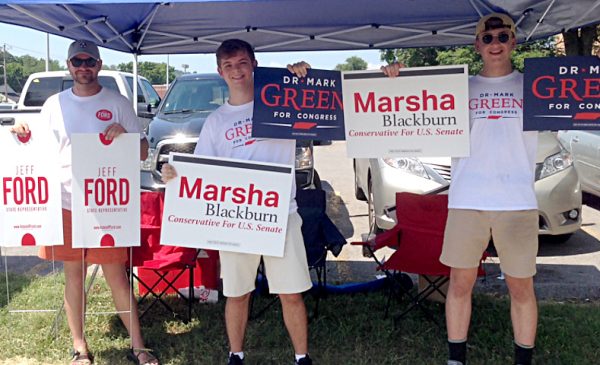 Green is running unchallenged in the Republican primary to replace Blackburn as the 7th Congressional District’s member of the U.S. House of Representatives. Blackburn faces token opposition in her bid to secure the Republican nomination for the U.S. Senate. She will face former Gov. Phil Bredesen, who has no opposition in the Democratic primary, in the November general election.

Jeff Ford is one of several candidates competing in the Republican primary to replace Rep. Charles Sargent (R-Franklin) in the 61st State House District. 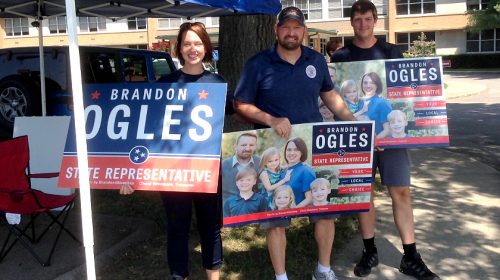 One of his opponents in that GOP primary race, Brandon Ogles, along with his wife, were also at the Williamson County Administrative Building on Friday under their own campaign tent with signs for Ogles’ campaign.

In addition to Ogles and Ford, attorney Gino Bulso, and activist Rebecca Burke are candidates in the hard fought Republican primary in the 61st State House District.