The controversy over Bill Lee’s company firing an Iraqi war vet has moved from the mailbox to the tv screens.

First, the Lee campaign put up a video of retired Colonel Thomas B. Vaughn defending Lee from claims that the termination of a Iraqi war veteran by the Lee Company reflected how Bill Lee treats veterans. Vaughn is one of Lee’s Middle Tennessee Co-Chairs for his Veterans Coalition.

Bill Lee is winning this race for Governor. That’s why one of his opponents is making dishonest attacks on Mr. Lee about how he treats veterans. It’s just wrong.

I know Bill Lee. He’s a good man. He’s one of the greatest supporters of veterans in Tennessee. Hires them, trains them, and treats them like family. Folks doing this should be ashamed.

Bill Lee should be Governor.”

Then, Fight for Tennessee PAC weighed in with its own “veteran ad.” The PAC began airing their television ad Tuesday morning that features a retired SEAL Team Six member, Robert J. O’Neill (who was part of the team that got Osama Bin Laden).  O’Neill takes Lee to task for failing to stand up for military veterans. 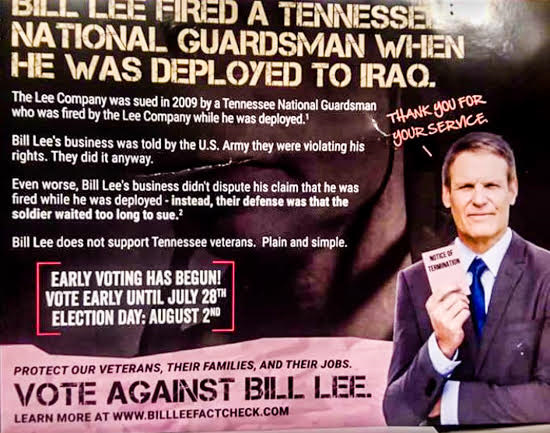 O’NEILL: I’m Robert J. O’Neill. I was a member of SEAL Team 6, part of the team that killed Osama Bin Laden.

We trust that when we get home our country will have our backs. That’s not what happened when Bill Lee was in charge. When his employee returned from deployment in Iraq Bill Lee’s company fired him.

Our men and women in uniform shouldn’t have to go to court to get justice. That is not the kind of leadership I learned in the SEAL teams.

Honor our veterans, vote NO on Bill Lee.”

O’Neill has claimed credit for firing the shots that killed Bin Laden. And though an ardent supporter of President Donald Trump, who dined with the President last Fall at the White House, he was critical of Trump’s idea of a big military parade because it is what third-world countries do.

Tennessee Star Political Editor Steve Gill says it is pretty late in the campaign for any particular issue to make a huge difference, but that “the Lee Campaign clearly feels vulnerable on this one and the Black campaign allies are driving the issue home in the final days. When any of the top three candidates can still win, shifting even a few votes down the stretch may make the difference.”

One Thought to “Lee and Black: The Battle of the Veterans TV Spots”