Posted on Rep. Tim Wirgau’s campaign website under the heading “Straight Talk with Tim” is this statement about his 2015 “yes” vote to award illegal alien students residing in Tennessee the in-state tuition benefit:

I am opposed to illegal immigration. My consistent voting record as your State Representative proves it. I have voted against sanctuary cities in Tennessee and illegal immigration. My opponent claims I voted to give to illegals with HB675. The record shows I voted against HB675. “Wirgau requested to be recorded as voting No. It was only when the Senate version was presented on the House floor with Amendment 488 which states, “A student may be classified as a Tennessee resident and be charged in-state tuition if the student: (1) Is lawfully present in the United States;…” I felt it necessary not to deny lawfully present children the opportunity for skilled training if they can afford to pay their way. No HOPE scholarship. NO Tennessee Promise. And That’s a Fact. 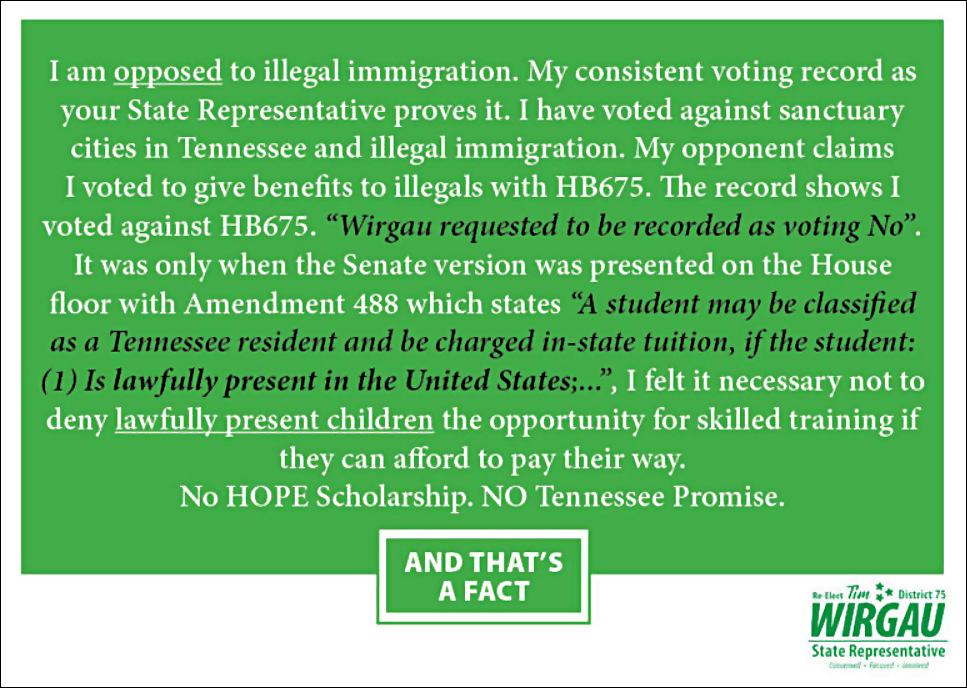 Wirgau’s post shows that he voted against the original language of the bill presumably because he understood that the bill was intended to give illegal alien students in Tennessee the in-state tuition benefit.

But, he states, he decided to vote for the bill once language was added requiring the student to be “lawfully present in the United States.”

However, whether or not Tim realized it, once that language was added to the bill it converted it into a vote for or against Obama’s 2012 executive amnesty for illegal aliens, a point raised by Rep. Matthew Hill during debate on the House floor. During his remarks, Hill discouraged codifying into state law, Obama’s amnesty program by passing the in-state tuition bill:

What we are doing is we are giving our approval as a legislative body to an executive order that President Obama put forth when it came to amnesty.

In early 2015, a federal judge enjoined Obama’s other amnesty program, holding that there was no statutory authority for the executive branch to unilaterally confer lawful presence and work authorization on illegal aliens – that is the job of Congress.

Two years later the case reached the U.S. Supreme Court with only eight justices to decide after the death of Justice Antonin Scalia; they tied in a 4-4 order  leaving the injunction in place.

Regardless of the “lawfully present” language which Tim says he relied on, both the original bill language and the one he voted to pass on the House floor required a signed affidavit stating that the student had “filed an application to legalize the individual’s immigration status, or shall file an application as soon as the individual is eligible to do so.” This provision was included because the bill was tailored for the Obama DACA (Deferred Action for Childhood Arrivals) grantees who regardless of the temporary deferral of deportation, remained illegal aliens.

During discussion on the House floor, Rep. Mark White, sponsor of the bill, told the legislators that the intended beneficiaries of HB675, were children in a “special situation” and referred to the 2012 DACA applicants:

There is no pathway to citizenship for these young people who were brought by parents at a young age. The only thing that has come out is Deferred Action for Childhood Arrivals [DACA].”

For any legislator listening to the remarks of the bill sponsor and the ensuing discussion by legislators, it was clear that the bill was intended to benefit illegal aliens in Tennessee.

White’s comments on the House floor were consistent with the explicit references throughout the committee process that the bill was intended for DACA applicants and “undocumented youth,” the same information brought by lobbyists from the TN Immigrant & Refugee Rights Coalition (TIRRC) to legislators.

During a hearing on the bill in the House Education Committee, White had the director of TIRRC testify and explain the DACA criteria to members introducing her as having “extensive knowledge on this and explain what DACA is.”

Eligibility to apply for the DACA two-year deferred deportation required a person to have entered the U.S. illegally before age 16 or remained even after their visa expired.

The U.S. Department of Homeland Security website explains that even  an approved DACA application does not alter a person’s illegal immigration status:

Q6: If my case is deferred, am I in lawful status for the period of deferral?

A6: No. Although action on your case has been deferred and you do not accrue unlawful presence during the period of deferred action, deferred action does not confer any lawful status…

“The fact that you are not accruing unlawful presence does not change whether you are in lawful status while you remain in the United States.  Because you lack lawful status at the time DHS defers action in your case, you remain subject to all legal restrictions and prohibitions on individuals in unlawful status.”

While the bill passed in the Senate, it failed by a single vote in the House.

The following year Tim voted to honor Renata Soto, chairman of the board of the National Council of La Raza by supporting HJR506 which was introduced by Nashville’s progressive Democrat leftist legislator, John Ray Clemmons. Beth Harwell also voted to support honoring Soto.

Tim has endorsed Harwell in the governor’s race.

3 Thoughts to “State Rep. Tim Wirgau Voted to Give In-State Tuition to Illegal Alien Students But Is Not Fessing Up to It With Voters”