The Phil Bredesen campaign tweeted on Sunday that it is looking for interns and is “open to anyone tired of the hyper-partisan squabbling.”

This campaign is open to anyone who is tired of the hyper-partisan squabbling and ready to send someone to Washington who can work together to get things done for Tennessee. Interested in interning with our team? Submit your resume at https://t.co/CTcehR7zmo. pic.twitter.com/IFPVnuspL2

Bredesen apparently does not consider it to be “hyper-partisan squabbling” when Mark Brown, spokesperson for the Tennessee Democrat Party, says “F*** Trump supporters. They’re all idiots.” 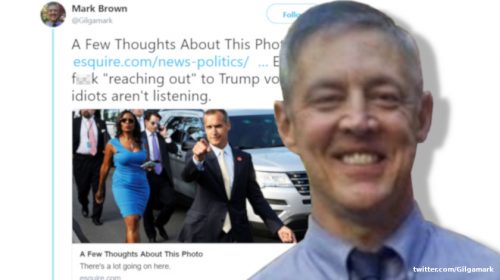 The Tennessee Star reported the details of Brown’s vulgar comments and Bredesen’s silent acceptance of them:

Republicans are raising a ruckus over a spokesman for the Tennessee Democratic Party’s use of foul language and name-calling, especially since that spokesman has been vigorously promoting the candidacy of Democrat Phil Bredesen for the U.S. Senate, who has expressed outrage at being called a “liberal.”

The former governor, who is running in the U.S. Senate race against Rep. Marsh Blackburn (R-TN-07), said last week it was “name-calling” when Vice President Mike Pence said he is a “liberal.”

However, Tennessee Republicans say Bredesen is deaf when it comes to the many imprecations uttered by state Democratic communications official Mark Brown, the Washington Free Beacon said.

Brown, who has been promoting Bredesen’s campaign in his role as a spokesman for the Tennessee Democratic Party, in the past has tweeted “f*** ‘reaching out’ to Trump voters. The idiots aren’t listening.”

The Tennessee Star reached out to the Bredesen campaign to ask if the former governor disavowed the Tennessee Democratic Party spokesman Mark Brown, or his foul-mouthed comments about the 1.5 million Trump voters in Tennessee.

The Bredesen campaign did not respond.

Bredesen’s failure to disavow Brown’s vulgar comments is not expected to sit well with Tennesseans, who are well known for their civility and good manners, something with which Mark Brown appears to be entirely unfamiliar.

Brown continues to promote Bredesen’s campaign for the U.S. Senate seat, and promote false rumors about his Republican opponent in the general election, Rep. Marsha Blackburn (R-TN-07). Bredesen, however, has failed to disavow Brown’s comments or call for his firing from the Tennessee Democrat Party.

“While Bredesen is clearly attempting to portray himself as the cure for the hyper-partisanship in Washington, his actual record reveals a completely different story,” Tennessee Star Political Editor Steve Gill says.

“Bredesen isn’t the answer to hyper-partisanship, he’s a poster boy for it and Tennesseans will see through his smokescreen eventually — hopefully before November 6,” he concludes.