NASHVILLE, Tennessee – -When I heard Whiskey’s Fine, on Sirius XM the Highway, I always stopped talking and turned it up. There was something about the lyrics to this bluesy, country song that got me. It was that good. Several months later at an event I attended during CMAFest, Sirius’s Storme Warren said to me out of the blue, you need to interview Adam Doleac.  Since I loved his song, I decided to pursue it.

The thing I like most about interviewing up and coming artists is hearing their “where I came from” stories.  And Adam Doleac’s is definitely different than anyone else’s.

Adam Doleac grew up in Hattiesburg, Mississippi where is he was strong, athletic boy.  By high school, he was really into basketball and golf and was even offered a golf scholarship from  Delta State University his Junior year. But in his Senior year, friends stated they needed one more player for their high school baseball team.  Having not played since Little League, he went to the batting cages and played in a game that night. By the end of his senior year, he was offered a baseball scholarship from Southern Mississippi University where the hometown boy led the team to the college world series in 2009.  So what does all this have to do with music?  Some of his teammates were guitar players and Adam learned to play and write music with them. When an injury kept him from pursuing a professional baseball career, he fell into music naturally.

Without a doubt, Adam Doleac is foremost a gifted songwriter.  In 2014, with his ability to construct meaningful tunes, he was offered a publishing deal with Sony/ATV.

When asked about deciding which songs to release Adam relayed, “Making new music and putting new music out is kind of a scary thing.  You could love it, your whole team could love it, but you don’t really know if everyone is going to love until you put it out there and see what [fans] think.”

In 2017, after Adam Doleac released an EP, his talent management company, 287 Entertainment had a VIP concert and invited several guests including staff from Sirius XM the Highway.  They, too, fell in love with Whiskey’s Fine and asked Adam Doleac to be one Sirius’s “Highway Finds.”  Adam relates about Sirius’s XM the Highway DJ, Storme Warren, “Not many people love music the way Storme Warren does.  He’s one of those guys that if a song is good enough, you can make him cry. In the world of the music business, when everyone is so serious, they are really not concerned about the song, they are concerned if it is going to sell.  Storme listens to a song and loves it or doesn’t.” Fortunately for Adam, Storme Warren loved Whiskey’s Fine and so did thousands of Sirius subscribers. 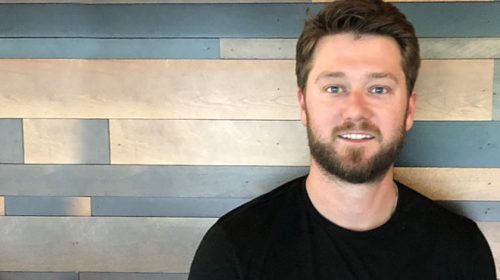 Not only that, Adam’s next release, Bigger than Us, is currently # 6 on The Highway’s top 30.  Once again, when I heard the song, the lyrics got me and I had no idea that this, too, was an Adam Doleac song.  When asked about the lyrics, Adam admits he’s a “hopeless romantic.”  “So many of country music songs are about one night instead one life.  I am very much a love-oriented person and I want to find love with a person that will last forever. In the chorus of Bigger Than Us, it makes you feel like you can do anything.  I love the lyrics. That’s my favorite thing about country music and Bigger Than Us is one of the most powerful lyrics I’ve written.” All of his team and publishing company knew this song was “the one.”

Adam Doleac admits he writes a song a day.  I asked him how did he know which ones to release or “give” to someone else.  He says, “We’ve played 150 shows and watched the crowd.  If the people don’t react to a song, I figure maybe Darius Rucker or someone else should be singing it.”  He continues, “Many people work a 9 to 5 day and have a boss to answer to.  The country music fans are my boss. My job is to make them forget whatever is going wrong during a concert and actually feel something with the music. Fans are the ones who decide which songs make the cut.”

Even though Adam Doleac may not have a traditional country voice, he certainly writes traditional lyrics. “I want to write songs that are timeless. There is a reason that people are still listening to the [country music] from the 1990’s.  A lot of the music that they are playing now, in 20 years, will be gone forever which is the opposite of what I want to do. I want people to still listen to my songs [after 20 years] and still think they’re good. Songs that say something rarely go away.”

As for now, Adam’s goal is to release a new album by the end of the year. Even though many go the route of recording shorter EPs, he would like to do a full album.  With lyrics as powerful as the ones he writes, we can’t wait.

You can download his music on iTunes, Amazon Music and Spotify.