When one of the biggest rivalries in Knoxville takes to the football field you can expect the event to attract a few political candidates catching the action while trying to scoop up a few votes in the process. 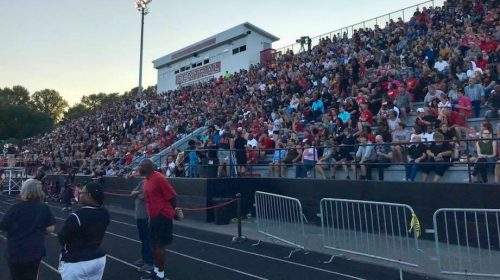 Thursday night Fulton and Central swapped hits in the annual BATTLE OF BROADWAY, and Republican Congressional candidate (and County Mayor for a few more days) Tim Burchett and Republican State Representative Eddie Smith were on the sidelines.

Both Burchett and Smith are hoping to avoid the same fate in their November 6 general election matchups.

Burchett is facing off against liberal Democrat Renee Hoyos in the heavily Republican 2nd Congressional District. Hoyos has been endorsed by the left wing group Indivisible that is seeing to create a “blue wave” across the country. The anti-Trump group is funded by far left progressives and has ties to George Soros. Another anti-Trump groups, Women’s March, has also endorsed Hoyos.

The two recently appeared on Knoxville’s WBIR Inside Tennessee political show. There are several issues that separate the two, from increased border security and a wall on the U.S. – Mexico border (Burchett for; Hoyos against), Medicare for all (Hoyos for; Burchett “we can’t afford it”), and whether President Trump tweets too much (Hoyos yes; Burchett no).

Smith is facing a familiar foe as Democrat Gloria Johnson, who has narrowly lost to Smith the past two election cycles, is taking a third straight shot.

Like Hoyos, Johnson is supported by Indivisible. Other liberal groups like Planned Parenthood, the Tennessee Education Association, other union groups and an anti-Second Amendment group Moms Demand Action have also weighed in for Johnson in this year’s rematch.

Burchett is heavily favored to win his race against Hoyos, while the Smith-Johnson contest should be another close battle.