In 2015, Greg Lukianoff (president of the Foundation for Individual Rights in Education) and Jonathan Haidt (professor of ethical leadership at New York University’s Stern School of Business) wrote an article for The Atlantic entitled “The Coddling of the American Mind.” In that article, the authors argued that students (college but also pre-college) increasingly react to words, books, images, and speakers with fear and anger because they’ve been taught to exaggerate danger, to let their emotions rule, and to engage in binary thinking.

It proved to be one of the most read and discussed articles ever published by the magazine. 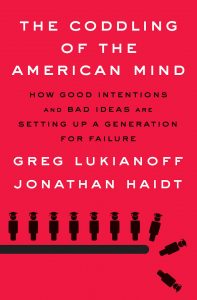 Now Lukianoff and Haidt have expanded on that article with a book entitled The Coddling of the American Mind: How Good Intentions and Bad Ideas are Setting up a Generation for Failure. Their book has a lot to say about the way our colleges and universities are making a bad situation – the bad mental habits noted above combined with the belief that kids must be kept absolutely safe – much worse.

The root of the problem, argue Lukianoff and Haidt, is that parents, teachers, professors and college administrators have been leading young people to believe Three Great Untruths.

The first of those is, as they call it, the Untruth of Fragility. That is the idea that what doesn’t kill you makes you weaker, and therefore young people must be protected against everything from a stray peanut to hearing any “hateful” ideas. Drawing an analogy to the human immune system, which can’t develop unless it occasionally has something to fight against, the authors say that trying to shield students against stressful ideas results in their weakness and anxiety. And when students haven’t learned to cope with ideological adversity, they’re apt to retreat into “safe spaces” or lash out with anger or even violence.

The second great untruth is that you should trust and follow your emotions. Emotions frequently get in the way of sound reasoning, but young people are often told that because they feel that something is true, then it really is true. Therefore, if you feel that someone has committed a “microaggression” against you, then he has. You need not weigh the matter, asking if you might have misunderstood the person or are judging too hastily. Just follow your emotions and fight back.

And third is the Us Versus Them Untruth – the erroneous view that the world is divided into good people and evil people. You need to side with the Good and battle the Evil. Once that mentality soaks in, there is no need for dialogue or debate since everything the other side might say will be lies and propaganda. Consequently, we see a tribal mindset emerging in some young people that reduces everything to the black and white.

Lukianoff and Haidt point out that those untruths don’t originate on college campuses. They begin and are nurtured from early life on through high school. Unfortunately, when students get to college, which ought to be an environment where people face and deal with ideas that they find offensive, shocking, or even hostile, they instead find reinforcement for the Great Untruths. Rather than helping students to mature, college surrounds them in an atmosphere of “vindictive overprotectiveness” that makes them more infantile.

For one thing, many schools now feature orientations and other programs that encourage students to see the world in “us versus them” terms. That’s the essence of the identity politics that saturates campuses these days. The authors write:

Imagine an entire entering class of college freshmen whose orientation program includes training in intersectional thinking, along with training in spotting microaggressions. By the end of their first week on campus, students have learned to score their own and others’ levels of privilege, identify more distinct identity groups, and see more differences between people. They have learned to interpret more words and actions as acts of aggression. They have learned to associate aggression, domination, and oppression with privileged groups. And they learned to focus only on perceived impact and to ignore intent.

All of that, write Lukianoff and Haidt, “prepares student for battle, not learning.”

Sometimes the numerous campus bows to “safety” and “diversity” boils over into ugly confrontations. For example, what started as an innocent email regarding Halloween costumes from a woman on staff at Yale (Erika Christakis) escalated into a mob with students screaming at her husband (Nicholas Christakis) for his failure to keep them “safe.” The Christakises were driven to leave Yale, but the school conferred an award on two students who had led the attack on them.

Another famous case the authors recount is that of Evergreen College, where angry, power-obsessed students terrorized the campus for more than a week over nothing more than one white professor’s decision to teach his biology course on campus when the day had been designated as “White Absence Day.” Afterwards, a faculty member remarked that the students “were doing just what we taught them.” Indeed so.

In those and other instances, it’s clear that the campus environment had exacerbated the immaturity of the students, turning them into dangerous, self-obsessed zealots.

The same Great Untruths can also prove harmful to faculty members, the authors point out. Just for having written slightly controversial articles, Rebecca Tuvel of Rhodes College and Northwestern University professor Laura Kipnis were assailed by students and fellow academics for having offended them. Rather than arguing against aspects of the articles that they disliked, the students and academics wanted those women to be punished. The power of emotional thinking and the “us versus them” mindset were on full display.

Those bad mental habits are not just “setting up a generation for failure,” but are sowing the seeds of bitter social strife in the future.

What should college leaders do to reverse course? Lukianoff and Haidt have a number of good suggestions.

First, they should endorse the University of Chicago’s statement regarding free speech on campus. And leaders need to do more than merely endorse the principles of free speech but must also educate students about them. I would suggest that instead of devoting orientation sessions to divisive talk about group oppression and privilege, colleges spend the time explaining why free speech is so important.

Second, they must never allow students to wield the “heckler’s veto.” In case the teaching about free speech doesn’t take hold, students need to understand that serious consequences will follow if they try to prevent people from speaking.

Third, schools should strive for more viewpoint diversity in their hiring. Haidt in particular has emphasized through his writings and the group he founded, Heterodox Academy, that it is harmful for academic disciplines to be dominated by a single mode of thought. Scholars get sloppy if no one pushes back against their ideas, but that’s the case in many departments.

Fourth, schools should “educate for productive disagreement.” That is, they should make sure that students see demonstrations of rational disagreement between reasonable people. One way to do that is to set up campus debates (and of course not undercut them with promises of “safe spaces” for students who fear that they might hear arguments against their cherished beliefs, as happened at Brown).

Fifth, explicitly reject the Us Versus Them untruth. How? By “encouraging politeness and empathy without framing issues as microaggressions” and deferring until later college years courses and readings that cause students to “make moral judgements about groups.” (I would question whether such are ever appropriate.)

The Coddling of the American Mind deserves a wide readership and vigorous discussion about how we are miseducating our youth. College leaders won’t like much of what it says because they have a lot to answer for.

George Leef is the director of editorial content at the James G. Martin Center for Academic Renewal.

Appeared at and reprinted from The Martin Center for Acedemic Renewal.