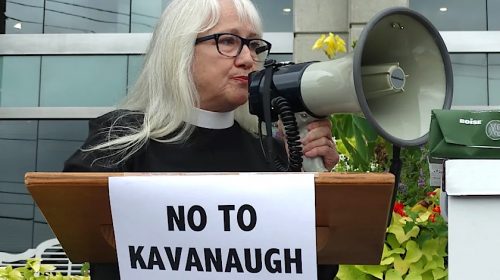 The comments came 17 years to the day after Islamist terrorists flew airplanes into the World Trade Center and the Pentagon on September 11, 2001, killing more than 3,000 Americans in the process.

They assembled on the front steps of the district offices of Tennessee’s two U.S. Republican senators, Lamar Alexander and Bob Corker, in Nashville’s West End.

Someone from Indivisible Tennessee spoke.

The motley crew of Trump-detesting rabble-rousers said they would backdrop themselves with “a mountain of paper reams representing the 100,000 documents still unavailable to the public” about Kavanaugh. 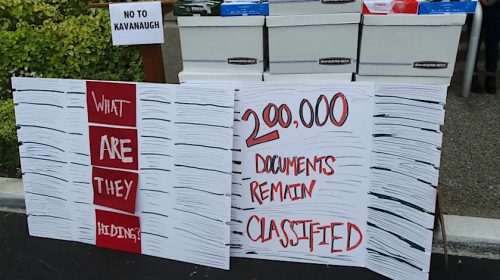 But in person all they had were empty cardboard boxes.

Of all the speakers, Justin Jones, a Vanderbilt student, was perhaps the most dramatic when speaking of the Kavanaugh nomination and what he said were the ultimate insidious goals of Washington, D.C. Republicans.

“That’s why they’re trying to put as many conservative white men on the court as they can.”

“These are scary times, and our civil rights are at stake,” Gilmore said. 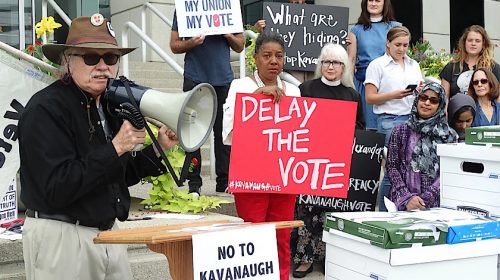 Gilmore then recited a list of the usual left-of-center platitudes about why Kavanaugh — or any other Republican-nominated justice — ought not serve.

“We need a fair voice on the U.S. Supreme Court, not a partisan Trump idol,” Gilmore said.

The other speakers stuck to the predictable script and repeated the same talking points over and over.

Activists lowered some of their protest signs to the ground and perched them against the empty cardboard boxes.

Tuesday’s light breeze knocked some of those signs down.

That was perhaps the only part of Tuesday’s protest that didn’t follow the usual left-of-center protest formula.