A major tissue collection company is allegedly selling aborted baby body parts for double to triple their price, according to a Monday report.

A Center For Medical Progress (CMP) special report reveals that Advance Bioscience Resources, Inc. (ABR) — a 501(c)3 non-profit — is allegedly selling aborted body parts for much more than their real cost even though federal law forbids the transfer of fetal tissue in exchange for “valuable consideration.”

Profit from the sale of fetal tissue does not indicate a violation of the law, but commercial sale of an item at a cost greater than reimbursement value is illegal.

ABR charged customers separately for two eyeballs from the same aborted baby, according to transaction records. Despite multiple charges for the specimens, however, ABR sent the eyeballs to the researcher together so that there would only be one transaction cost as opposed to two, according to CMP’s report.

ABR charged a University of Utah customer $12,000 for two tissue samples that arrived in too poor of a condition to be usable for research, CMP’s report claims. The customer responded to ABR’s bill, noting “the costs for travel, hotel, time, food, personnel time, clinic fees and some overhead … [is] around $3,000.” 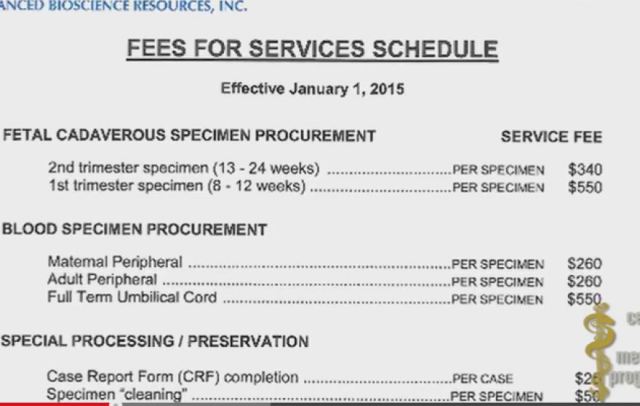 A Select Investigative Panel found in 2016 that ABR had committed “potential violations of the law.”

U.S. Senate Judiciary Committee Chairman Chuck Grassley also referred Planned Parenthood affiliates and a number of fetal tissue companies — including ABR — to the FBI and the Department of Justice for investigation.

ABR manages a yearly revenue of approximately $1.5 million with more than $200,000 in profit. ABR’s contract with Planned Parenthood is worth roughly $1 million, according to Monday’s report.

The Food and Drug Administration (FDA) as well as the National Institutes of Health (NIH) are two of ABR’s main customers. Since 2012, the FDA has entered into eight contracts with ABR.

CMP undercover footage documents other suspect activity, including Planned Parenthood employees and leaders talking about colleagues who are trained to check off paperwork indicating they comply with the federal government’s partial birth abortion ban, but then dismembering unborn babies after 22 weeks which violates federal law.

ABR did not immediately respond to The Daily Caller News Foundation’s request for comment.