The Barnes and Noble bookstore in Collierville just outside of Memphis proper, has a display of politically-themed books that screams “we support the resistance”!!!!

FEAR, Bob Woodward’s questionable version of the Trump White House has been placed on the top shelf riser as a first view item.

Front and center, abutting right below FEAR are two new releases about Obama. 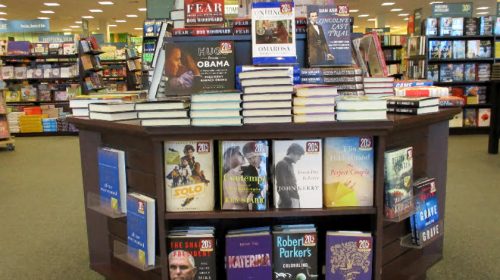 Don’t you just love the ever-so-clever title Hugs From Obama, A Photographic Look back at the Warmth and Wisdom of President Barack Obama”??? Conjures up all those warm and fuzzy feelings from the eight long seemingly never-ending years of taking the U.S. down the tube. Plunk down the extra $20 bucks in your pocket because of Trump’s tax cuts and you can do whatever you want to “enhance” the photos.

Completing the trifecta of books on the ‘Resistance Recommended Reading List’ is the by Omarosa whose book sales tanked simultaneously with the release of Unhinged. Even leftist media propaganda and Omarosa’s release of tell-nothing tapes couldn’t stop the public humiliation of her failures.

But wait. Just to prove that Barnes & Noble book stockers aren’t playing favorites or trying to telepathically draw patrons into ‘the Resistance,’ they haven’t moved the books that right-minded readers might want to the back shelves.

But ‘the Resistance’ has only one target – the very successful and popular, President Donald Trump.

One Thought to “OFF THE RECORD: Memphis Barnes&Noble Stacks Books For ‘The Resistance’”