NASHVILLE, Tennessee–Sen. Lamar Alexander (R-TN) told a gathering of the Nashville Kiwanis Club on Friday he believes that Judge Brett Kavanaugh will be sitting on the Supreme Court on October 1.

Alexander began his comments by noting that “the Senate has gotten into a bad habit” in recent years in the way it conducts hearings on nominees for the Supreme Court. 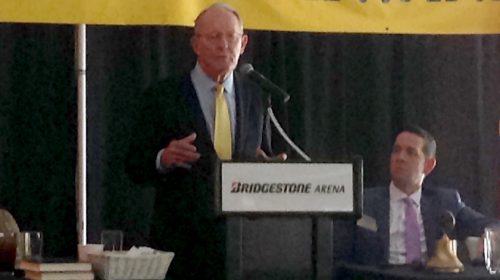 “I believe that Judge Kavanaugh will be confirmed by the Senate at the end of the month and be sitting on the Court October 1 when it opens its new term,” Alexander told the audience at the Patron Platinum Club Restaurant at Bridgestone Arena.

Alexander said some Democrats in the Senate now consider Supreme Court nominees as “innocent until nominated.”

“They treat someone like Judge Kavanaugh as if he were recently released from San Quentin prison. Although in fact, he is one of the most highly regarded members of the Federal Circuit Court,” Alexander said.

“You have a Republican president appointing judges, and the Democratic senators acting like they’re in the circus, trying to insult the judge . . . for whatever reasons I’m not sure. It’s a very bad habit. It’s not good for our country,” he noted.

“Judge Kavanaugh demonstrated the qualities that I look for in a judge or a Supreme Court justice—good character, good temperament, high intelligence and respect for the law. I look forward to voting for him, as I did when I voted for him to be a member of the D.C. Circuit Court of Appeals. I think he will make an excellent member of the United States Supreme Court,” Alexander added.

Alexander also praised President Trump for the economic boom caused by the Tax Cuts and Jobs Act passed by the Republican controlled House and Senate and signed into law by the president in December.

He took exception to the president’s policies on tariffs, however. 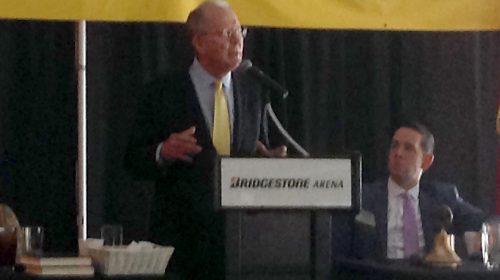 “The Senate labor committee hearing I chair held a hearing last week on President Trump’s zero tariff trade goal, which I believe is the right policy and is good for Tennessee autoworkers. The wrong policy is piling tariffs on top of tariffs, which will destroy jobs and lower family incomes,” Alexander told the audience.

“According to Nissan, steel accounts for 70 percent of the vehicle weight of the cars and trucks built at their plants in Tennessee and Mississippi. The price of steel has gone up 40 percent since January, and you don’t have to be a math major to figure out that soon the price of cars and trucks will have to go up by thousands of dollars,” he continued, adding:

Just take the story of the Nissan Rogue – which is made right here in Middle Tennessee. Several years ago, Nissan had an internal competition between its automotive manufacturing plants in Japan, South Korea and Smyrna, Tennessee, to decide which one of the plants would build the new Nissan Rogue. The Smyrna plant won the competition, and NAFTA’s zero tariff policies were a big reason Nissan chose to build the Rogue in Tennessee. NAFTA allows Nissan to move parts between the U.S., Canada and Mexico tariff-free, which makes it cheaper to build the Rogue in Tennessee than it would be in South Korea or Japan. NAFTA has had the effect of getting more companies to make here what they sell here – and Tennessee’s auto jobs have nearly doubled since NAFTA went into effect.

In The Tennessee Star Poll released on Friday, likely voters in Tennessee supported higher tariffs by a 54 percent to 34 percent margin.

The specific poll question and results were:

Do you support or oppose the higher tariffes, which are taxes, on products that foreign countries sell in the U.S. that President Trump has put in place in order to force them to lower the tariffs on products that the U.S. sells in their countries?

Sen. Alexander’s six year term in the U.S. Senate ends in January 2021. He has not yet announced publicly whether he will run for a third term in the Senate in the November 2020. He will be 80 years old on election day 2020.

You can listen to Sen. Alexander’s comments on Judge Kavanaugh here: