Yet this story isn’t getting the media coverage it deserves.

As if it wasn’t already obvious, that’s because they suddenly have more cash at their disposal.

These were among the key messages conveyed at an event at The Factory at Franklin Wednesday. The Atlanta-based Job Creators Network, a small business advocacy group, organized it.

“The state is at 2.7 percent unemployment, and that is why you are seeing the aggressive wage growth,” said Blackburn, currently running to replace Bob Corker in the U.S. Senate.

“Business owners can pay their employees more and not have people leave, so there is no constant retraining for them to have to do with new employees.” 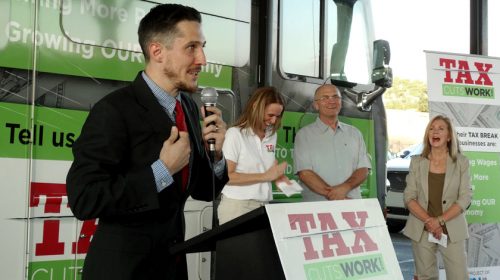 Jonathan Harris, owner of the Nashville-based real estate firm Scout Properties, told a crowd of about 50 the tax cuts made his company prosper.

“Whenever I experienced a tax cut it gave me some dry powder to be able to take some risks. Since the tax cuts we have started two additional companies,” Harris said.

“I feel for once that the government has not saddled me down.”

“Business people see the government is behind us, and we feel we can take more risks,” Henry said.

“The news media doesn’t seem to be covering it very reliably. I assume for some outlets it’s a dissatisfaction with President Trump,” said Puzder who was Trump’s nominee for Secretary of Labor in early 2017 before he withdrew.

“I think to some extent the numbers aren’t easy to understand or to distill into stories.”

Among the important points the media has missed, Puzder said:

• Hourly wages are up 3.4 percent in August over the year before and benefits are up 3 percent.
• Take home pay is up 5 percent.
• The country has the lowest number of unemployment claims filed since 1969.
• In August, the Congressional Budget Office reported that for the quarter ending in July the federal government took in $26 billion more this year than it did last year.

“We have had more job openings than people unemployed.

Businesses are investing and consumers are buying,” Puzder said.

“Everyone should be happy. You would think even progressives and socialists would understand that working middle class Americans are getting tremendous benefits out of this,” Puzder said.

“They just can’t admit it, but you think they would know it. The benefits we are seeing are principally from tax cuts.”

“We have more than 6 million people that we know of in the news who have gotten raises and bonuses as a result of the tax cuts, and those are only the companies that have put out press releases,” Parker said.