Members of Middle Tennessee State University’s Political Science Department published a post on their official Facebook page that comes across to many people as a political endorsement for a Democrat.

This is problematic because MTSU takes taxpayer money, is a public university and has no business taking sides when it comes to politics.

The ad asks for volunteers and interns to assist Trotman.

The writer of the post attached a YouTube video of Sherrell proclaiming he opposes abortion and gay marriage.

For members of MTSU’s Political Science Department to seek out volunteers for a political campaign is nothing unusual. 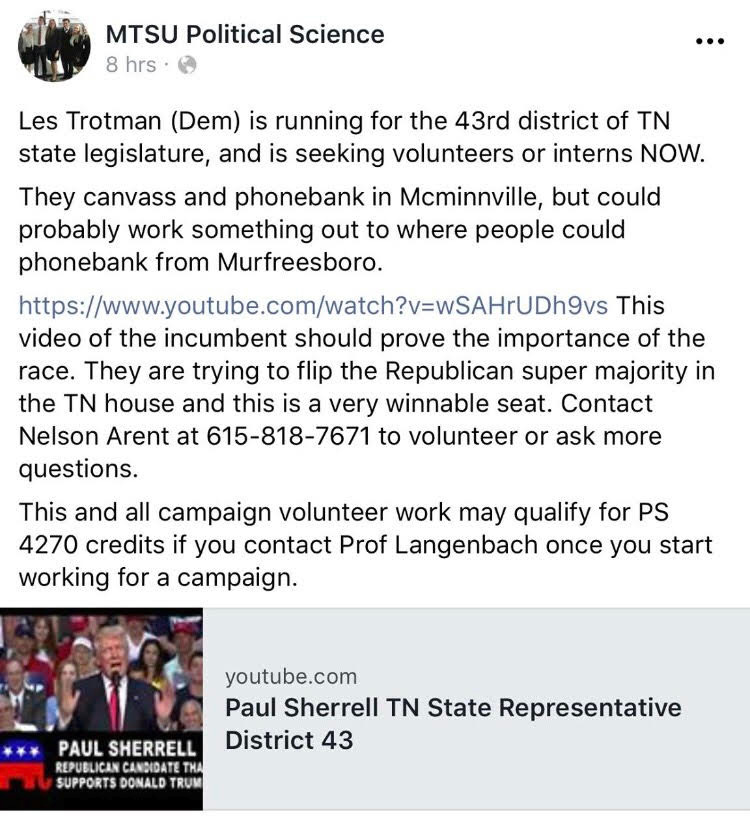 “The video of the incumbent should prove the importance of the race,” the writer of the post says.

“They are trying to flip the Republican super majority in the TN house and this is a very winnable seat,” the post went on to say, adding the work will qualify for class credit in a political science course.

Conservatives who read the post voiced their grievances almost immediately.

So how did this ad get approved?

“What we typically do is we just pass them along to the students and say that if you’re interested here is the contact information, and if you want to do it for credit then we provide them with information about the faculty member to contact to see about getting academic credit for the internship,” Federici told The Tennessee Star.

“In this case, the ad was a little atypical and I would say in retrospect we probably missed a couple of things about it. One was that the description of the internship had embedded in it what you might call more partisan language saying things like the seat was winnable for the Democrats to flip because it’s currently held by a Republican and it had a link to a video that was attached.”

After the conservative backlash, members of the department revised the post. Federici, though, said Facebook wouldn’t allow them to remove the attached video featuring Sherrell. So, they asked the school’s web marketing department to take over.

“I don’t know what happens from here. It could be that they will just remove the whole thing and then repost the sanitized version of the ad,” Federici said.

In fact, someone with access removed the post about 30 minutes after The Star reached out to MTSU on Thursday.

“I understand the sensitivities some people may have, especially those on the political right, about universities and classrooms, Federici said.

“I will tell you, speaking for myself, I am adamantly opposed to the ideological indoctrination of students in the classroom.”

MTSU Alum Justin Owen, in a Facebook comment, said the problem had everything to do with language.

“If my nonprofit posted what you did we’d lose our 501c3 status. Intended or not it was most certainly electioneering,” Owen wrote in the comment thread for the now-removed post.

“Blaming it on ‘oh, we just posted what the campaign sent us’ does not absolve you of the responsibility to avoid electioneering. You should be extra careful about just copying and pasting from a campaign or any external source. Laziness is not an excuse to accidentally use taxpayer money to advocate for or against certain candidates or political parties.”