Bredesen is running against U.S. Representative Marsha Blackburn (R-TN-07) for the Senate seat being vacated by Senator Bob Corker (R-TN) who is retiring.

“We need to get new leadership. I can tell you right now that if I’m elected, and when I’m elected and go to Washington, I am not going to be voting for Chuck Schumer,” Bredesen said at the beginning of the debate.

He managed to make news by saying he wouldn’t vote for Schumer to be the leader of the Democrat caucus, even though Schumer, the Senate Minority Leader, recruited him. But there’s a problem with that.

Politico said, “The pledge is functionally useless — unlike in the House, where the speaker is chosen by a majority of the chamber in a floor vote, Senate party leaders are chosen by a majority in a private caucus vote. While there might be enough Democratic House candidates to deny (U.S. Represesntative Nancy) Pelosi the 218 votes she needs to become speaker again, there is virtually no chance of Schumer being dethroned by the Democratic Caucus after the election.” 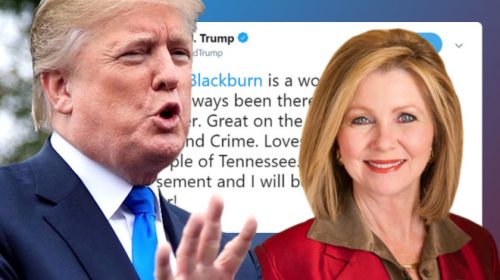 Meanwhile, Schumer does have plenty of impact on Bredesen. Politico also said, “Majority Forward, a nonprofit organization aligned with Schumer, has spent more than $3.5 million on ads in the Tennessee race so far, according to the Federal Election Commission. The group has even more ads reserved for this fall.”

Garren Shipley, RNC spokesman, said, “Phil Bredesen spent most of (the) debate doing his best to convince Tennesseans that he’s not the anti-gun, pro-abortion, anti-tax cut Democrat that Chuck Schumer needs in the U.S. Senate. But just like Phony Phil’s claim to have an ‘A’ rating from the NRA, it’s just more smoke and mirrors. Tennesseans are smarter than that, Phil. You should know better.”

On Tuesday after the debate, Memphis entrepreneur Jeff Webb told The Tennessee Star, “Phil Bredesen’s claim in the debate tonight that he can be effective as a moderate Democrat in the U.S. Senate is either naive or a charade.”

“The Democrat Party is becoming rapidly more liberal, and as a freshman senator, Bredesen will be required to toe the party line if he wants to even have a shot at prime committee slots or chairmanships. Remember, not one Democrat senator, including all the moderates, voted for the Trump tax cuts,” Webb added.

Bredesen was caught in another outright fib on the campaign trail by Chris Cox, the head of the NRA’s Political Action Committee.

The former Tennessee governor has claimed in a recent campaign commercial that he has an “A” rating from the NRA.

Not so, Cox said in the press room after the debate Tuesday night.

“On September 19, Bredesen posted a video to Twitter in which he is seen holding a shotgun and can be heard talking about the A rating he had from the NRA while Governor of Tennessee,” Breitbart News reported, adding:

Bredesen was elected governor in 2002, and Chris Cox responded to Bredesen’s video by pointing out that this is 2018, not 2002. Moreover, regardless of Bredesen’s rating then, his rating now is a D.

Cox wrote pointedly, “Its 2018, you have earned a D rating for turning your back on self-defense and supporting the Hillary/Schumer/Bloomberg gun control agenda.”

Cox then urged Tennesseans to vote for Marsha Blackburn (R) for Senate and demanded that Bredesen “stop lying.”

Bredesen was also caught stretching the truth on the campaign trail recently about his role in bringing Volkswagen to Chattanooga.

3 Thoughts to “‘Fibber Phil’ Bredesen Claims ‘I Am Not Going to Be Voting for Chuck Schumer,’ But Even Politico Admits ‘The Pledge Is Functionally Useless’”