In 2017, the Tennessee Star featured Nashville recording artist LynnMarie in their Music Spotlight column. Since then, Lynn Marie has received the Lifetime Achievement Award and induction into the National Cleveland-Style Polka Hall of Fame, the organizations’ highest honor. The announcement was made tonight at the Annual Thanksgiving Preview Party in Cleveland, Ohio.  LynnMarie is the fourth female in history to receive this honor.

On hearing the news, LynnMarie said, “I am so grateful and excited! Thank you to members of the Hall of Fame for recognizing my talents and to the fans all over the world who are a part of the polka community. Polka music runs deep in my blood and I have enjoyed every minute and every note!”

LynnMarie was born and raised in the Slovenian community of Maple Heights, Ohio, a suburb of Cleveland. Wanting to follow in her father’s footsteps as an entertainer, she started playing the diatonic button accordion at the age of eleven. She has released thirteen recordings and performed on The Tonight Show with Jay Leno. In 2011 she wrote and starred in a one-woman play off-Broadway and in Los Angeles, and in 2016 she released her memoir Wrap Your Heart Around It.  She has collaborated and recorded with such musical greats as Dobie Gray, Ray Benson, Riders in the Sky and Vince Gill. LynnMarie is the first and only female in history to be recognized by The Grammys (NARAS) five times for “Best Polka Album”. 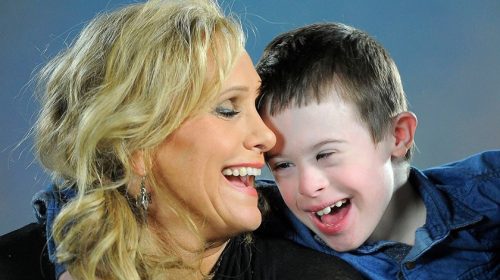 LynnMarie tours across the country and in Europe with her band LynnMarie & The Nashville Polka Guys and as the duo LynnMarie & E3, with her fiancé Eddie Rodick. She also shares her inspiring story of acceptance –  as a motivational entertainer, public speaker and blogger – chronicling her life with her son James, who was born with special needs.

When she is not performing on stage in front of the cameras, LynnMarie is working behind the scenes as a television script supervisor, associate director and producer. Currently, she is working for the nationally syndicated talk show, Pickler & Ben, produced by Grammy Award-winning superstar Faith Hill and co-founder of Happy Street Entertainment Lisa Erspamer.

Seeing LynnMarie in person is a treat you won’t want to miss. Residents of Nashville, Tennessee, and Cleveland, Ohio and Atlanta, Georgia can see LynnMarie and her band in person at the following locations:

The Polka Hall of Fame induction ceremony will take place Saturday, November 24th, at the Marriot Hotel in Cleveland, Ohio, as part of the five-decade-long Thanksgiving Polka weekend celebration.