Fox News reported late Tuesday night that a person claiming to be the ex-boyfriend of Dr. Christine Blasey Ford, who has accused Supreme Court nominee Brett Kavanaugh of sexual misconduct, has sent a letter to the Senate Judiciary Committee in which he contradict’s her sworn public testimony.

In questioning by attorney Rachel Mitchell, Dr. Ford stated unequivacily that she never coached anyone on how to take a polygraph test.

Prosecutor Rachel Mitchell: “Have you ever given tips or advice to somebody who was looking to take a polygraph test?”

In his letter to the Senate Judiciary Committee Ford’s ex-boyfriend stated that he witnessed Dr. Ford coach her friend on how to take a polygraph exam back in the 1990s:

During our time dating, Dr. Ford never brought up anything regarding her experience as a victim of sexual assault, harassment, or misconduct. Dr. Ford never mentioned Brett Kavanaugh.

During some of the time we were dating, Dr. Ford lived with Monica L. McLean, who I understood to be her life-long best friend. During that time, it was my understanding that McLean was interviewing for jobs with the FBI and the US Attorney’s Office. I witnessed Dr. Ford help McLean prepare for a potential polygraph exam. Dr. Ford explained in detail what to expect, how polygraphs worked and helped McLean become familiar and less nervous about the exam. Dr. Ford was able to help because of her background in psychology.

You can read the letter, with the ex-boyfriend’s name redacted, as downloaded to Scribd by Fox News here: 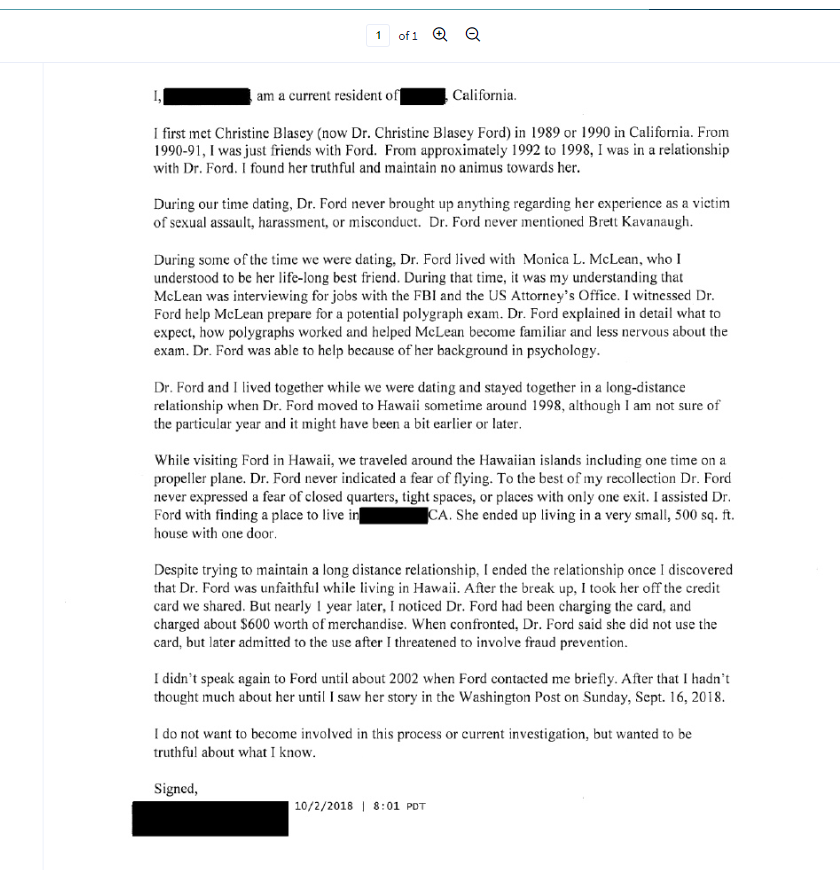 In a pointed, no-holds-barred letter Tuesday evening that referenced the ex-boyfriend’s declaration, Senate Judiciary Committee Chairman Chuck Grassley demanded that attorneys for Ford turn over her therapist notes and other key materials, and suggested she was intentionally less than truthful about her polygraph examination during Thursday’s dramatic Senate hearing.

“Your continued withholding of material evidence despite multiple requests is unacceptable as the Senate exercises its constitutional responsibility of advice and consent for a judicial nomination,” Grassley, R-Iowa, wrote.

The bombshell revelation comes on the eve of what is expected to be the completion of the FBI report on Kavanaugh and the allegations of sexual misconduct made against him by Dr. Ford and two others. Sen. Jeff Flake (R-AZ) demanded that this seventh FBI report on Kavanaugh be completed as a condition of his positive vote to move the Kavanaugh nomination out of the Senate Judiciary Committee last Friday to the full floor of the Senate.

Senate Majority Leader Mitch McConnell (R-KY) has said an up or down vote on Kavanaugh’s confirmation will be held in the Senate some time this week.

2 Thoughts to “Dr. Christine Blasey Ford Testified Under Oath She Had Never Coached Anyone on Taking Polygraph But Ex-Boyfriend Says ‘I Witnessed Her’ Coach Friend”