The involvement by billionaire Bloomberg is likely to increase scrutiny on one of the tightest races in the midterm elections, as Bredesen, a former Tennessee governor, is trying to flip the seat being vacated by Senator Bob Corker (R-TN), who is retiring.

The event is being billed to financiers as an opportunity to “join Mike Bloomberg for an evening in support of Governor Phil Bredesen,” according to the invitation. 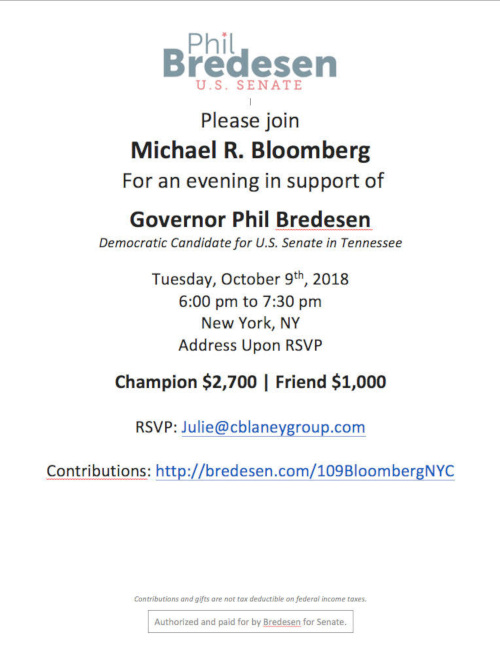 The Tennessee Republican Party said, “When President Trump said Phil Bredesen wouldn’t protect the Second Amendment during his speech in Johnson City, he was more right than he could have known. Today we found out that anti-Second Amendment zealot Mike Bloomberg is holding a fundraiser for Bredesen in New York.”

Bloomberg said in 2014, “And if you want to have a gun in your house, I think you’re pretty stupid – particularly if you have kids – but I guess you have a right to do that. Someday, there is going to be a suit against parents who smoke in their houses or have guns in their houses by a kid. It’s not that far-fetched.”

Donors are being asked to contribute up to $2,700 to Bredesen’s Senate campaign in order to attend, CNBC said. It is not clear if Bredesen, a New York native, will attend.

Bloomberg, a Republican-turned-independent, emerged as the single most significant financial force for gun control

Earlier this week, Bloomberg announced he would give $20 million to the Senate Majority PAC, which is dedicated to electing Democrats to the U.S. Senate and that is affiliated Minority Leader Chuck Schumer, CNBC said.

The National Rifle Association has been demanding Phil Bredesen retract a misleading ad from his U.S. Senate campaign in which he uses an old rating to make it appear the organization supports him.

The former governor had received an “A” rating from the NRA – in 2002.

“Phil Bredesen is a ‘D’ rated candidate, and he will not protect our constitutional rights in Washington, D.C.,” Chris W. Cox, chairman of the NRA’s Political Victory Fund, said in a statement. “Tennesseans should not be fooled by his false and misleading campaign ads.”

Jason M. Reynolds has more than 20 years’ experience as a journalist at newspaper outlets of all sizes.