Boots, barbecue, blue jeans and beans are meeting up with politics once again in Franklin. 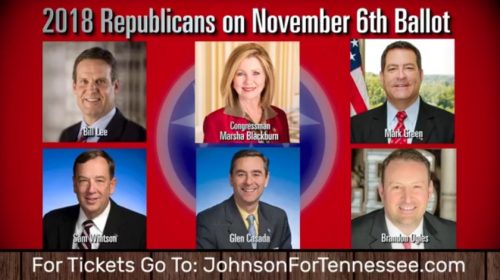 Johnson’s event will feature live music from the Austin Brothers and Martin’s BBQ. The event also will feature an all-star lineup of Tennessee GOP figures, including:

Speaking about the event, Johnson said, “I am thrilled and honored to be able host my 12th annual Boots & Jeans, BBQ & Beans event. My family and I look forward to this all year and seeing all of our friends and neighbors come together for a family-friendly afternoon of BBQ and live music.”

Johnson has lived in Middle Tennessee since graduating from Texas State University with a degree in education, according to his biography.

He and his wife Deanna, the Circuit Court judge for the 21st Judicial District, live in Franklin with their three children. They attend Grace Chapel Church.

Johnson has over 20 years of hands-on experience in the financial industry. In late 2015, he began work for an internet start-up company in Brentwood called Takl. Called the “Uber for odd jobs,” Takl is an on-demand mobile platform that connects self-employed providers with users who need chores and small jobs done.

The 23rd District includes all of Williamson County.